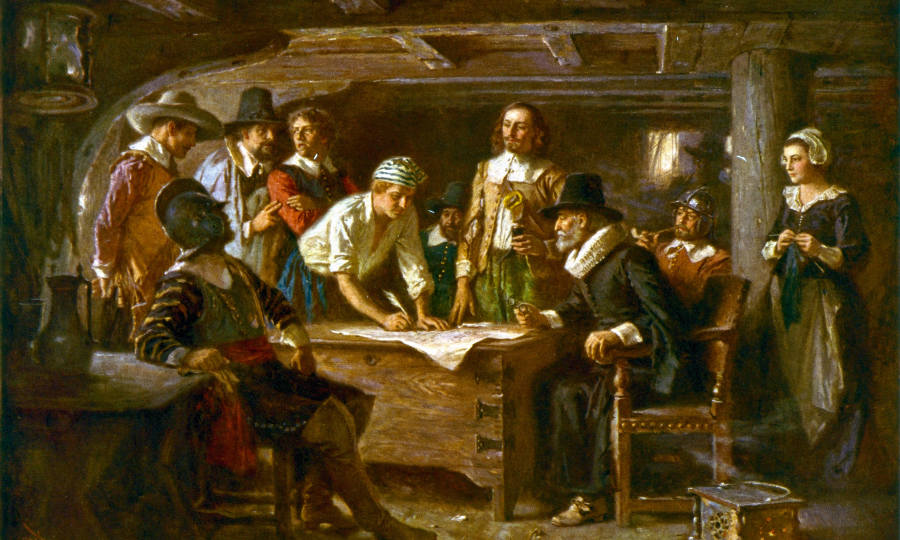 There is a war on history in our time. There is an all-out effort to cut us off from our past — presumably to make us into a nation in the image of what the Left wants.

For example, Thanksgiving would seem to be as American as apple pie. But an article last week (11/17/20) in the New York Times refers to the “myth” of Thanksgiving.

The so-called “paper of record” quotes a Native-American historian, Linda Coombs, of the Wampanoag Tribe (of New England). She writes about the first Thanksgiving: “There was an event that happened in 1621….But the whole story about what occurred on that first Thanksgiving was a myth created to make white people feel comfortable.” In effect, the article blames the Pilgrims for what others did long after them.

Amazing. The Pilgrims, who settled Plymouth, Massachusetts, had a stellar reputation with the Indians. They made a treaty of peace that lasted half a century.

Rev. Billy Falling, a Native-American pastor and author, told me: “The Pilgrims had good relationships with the Indians….As a Native-American, I thank God for the Europeans that brought us… the Gospel and brought Western Civilization.”

Obviously, terrible, inexcusable things happened to Indians, long after the Pilgrims, at the hands of other European settlers and Americans. But in doing injustice to Native Americans, they were not at all following the Christian example of the Pilgrims.

Meanwhile, this month is the 400th anniversary of the Pilgrims coming to these shores — a milestone in history.

Pastor, broadcaster, and author Dr. D. James Kennedy once observed that America began as “a church relocation project.” His comment is profound — inasmuch as the Pilgrims who settled Plymouth four centuries ago founded America.

The church relocation was from mid-England to Holland to America.

The Pilgrims were one particular congregation that was born in the Midlands of England, in the sleepy village of Scrooby, about 150 miles north of London.

The Bible was beginning to be read by many in England for the first time, and it caused an unexpected reaction. As people compared the New Testament with what they were seeing in practice in the official Church of England, they felt there was a need for positive changes.

A large group of those wanting reform within the Church of England, which was Protestant in its theology but Roman Catholic in its liturgy, worked for the purity of the Church. They were derisively called Puritans.

A very small subset of Puritans were Separatists. They thought reform within the Church was hopeless, so they created small, secret congregations of believers, separate from the Church of England — which was illegal at the time.

Who Were the Pilgrims?

The Pilgrims were one particular congregation of Separatists that was born in mid-England around 1606 during the time when Separatist church meetings were illegal. Their goal was to worship Jesus in the purity of the gospel as they understood it. The Bible (the Geneva version) was the focus of their existence.

Because of persecution in England, they decided to emigrate to Holland, where they stayed for more than a decade. But they could see, over time, their church slowly dissipating. So they wanted to come to America to more fully practice their faith.

In the 66-day voyage of the Mayflower, they were blown off course and ended up under no government’s jurisdiction. To bind the colony together, they wrote an agreement for self-government, under God. It was a political covenant based on the Biblical model of covenant.

In this document, the Mayflower Compact, which was written “in the name of God” and in which they stated that they came “for the glory of God and the advancement of the Christian faith,” they created a “civil body politic.”

Historians tell us that the Mayflower Compact was a key forerunner to the Declaration of Independence and the U.S. Constitution. These in turn have led to a great deal of freedom for hundreds of millions of people to enjoy.

I once interviewed Dennis Prager of PragerU about America’s Judeo-Christian roots. He told me, “The Pilgrims founded America, for all intents and purposes.”

The great leader of the Pilgrims, William Bradford, wrote of the whole Pilgrim experience: “Thus out of small beginnings greater things have been produced by His hand that made all things of nothing, and gives being to all things that are: and, as one small candle may light a thousand, so the light here kindled hath shone unto many, yea in some sort to our whole nation: let the glorious name of Jehovah have all the praise.”

As Americans, we do indeed have many reasons for celebrating thanksgiving to God for our freedom — notwithstanding attempts from the New York Times to distort our history. And it all began 400 years ago from this time. Not bad for a church relocation project.