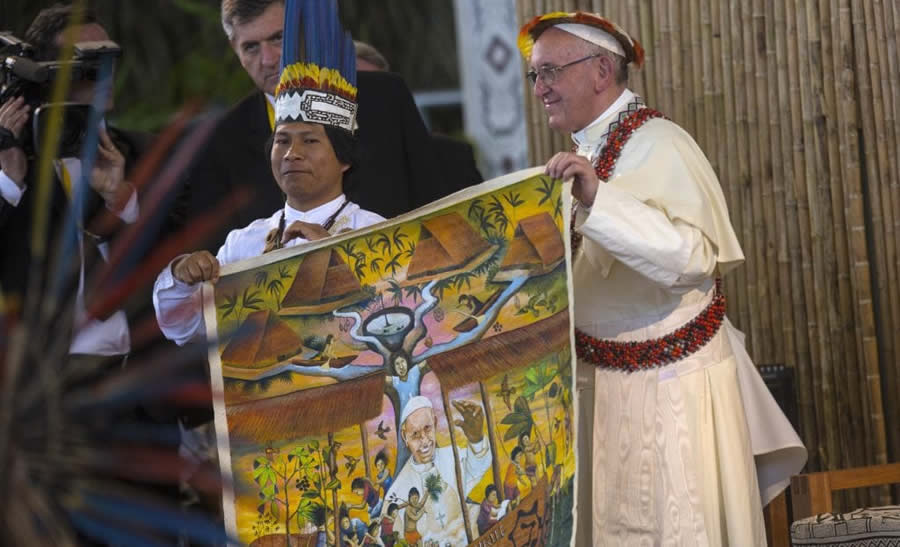 Like most Catholics and many Christians, I’ve found the phenomenon of Pope Francis deeply puzzling. His reign has been weird from the very outset. First, Pope Benedict resigns for murky reasons, not long after getting a phone-book-size report on gay shenanigans inside the Vatican. That report never sees the light of day. The night Pope Benedict resigns — the first papal abdication in more than 500 years — St. Peter’s gets struck by lightning.

Then the cardinals elect a man most of them don’t know. An obscure bishop from Argentina disliked by his fellow Jesuits. (That made us briefly hopeful, at first.) Someone who has published virtually nothing. I know because I worked at a publishing house that scurried to buy and translate a collection of his old sermons. I had to edit the book in a hurry. As I read it and added subheadings, I remember my first impression. I thought, “I can’t suss out this guy’s actual views. But one thing I can tell is that he’s a nasty piece of work. I wouldn’t want to land this priest in Confession.”

A Trail of Burned Bridges

If you read Henry Sire’s The Dictator Pope, you’ll learn that others shared my impression. In fact, wherever Jose Bergoglio went, from early priesthood onward, he left a trail of burned bridges and knives in backs. That’s why he has never gone back to his native Argentina. Unlike Pope John Paul II, whose return to trip to Poland filled the streets with his admirers, Francis would likely face empty streets or a barrage of rotten vegetables. I confirmed this with an Argentine priest I met last week. He said, “Nobody in Argentina wants to see him again.”

Francis’ autocratic, thin-skinned personality emerges whenever someone criticizes him. The mild-mannered American Cardinal Raymond Burke raised some lucid objections to Francis’ actions. In particular to Francis’ efforts to conform Catholic marriage to the modern divorce culture. (First by making “annulments” risibly easy to get, then by allowing Holy Communion to the divorced living in what the Church considers adultery.) Francis kicked Burke to the curb, removing him from his important Vatican positions. Then he put him in charge of the Knights of Malta. Then Francis gutted the Knights of Malta, removing their Grand Master and putting in his own puppet.

When Burke and three other cardinals asked crucial theological questions in a formal “Dubia,” Francis ignored them. Two of them have since died, still waiting for Francis’ answer.

Then the former Vatican ambassador to the U.S., Archbishop Carlo Vigano issued a letter. It revealed that Francis knew all about the sexual depravity of ex-Cardinal Theodore McCarrick. Knew that McCarrick had sexually harassed young seminarians for decades. Knew that seminary rectors would shout, “Hide the handsome ones!” when the Cardinal Archbishop of our nation’s capital showed up.

But Francis lifted the sanctions Pope Benedict had slapped on McCarrick. He asked McCarrick for advice on appointing bishops. Then sent him jet-setting around the world, representing the pope in crucial diplomatic deals. McCarrick was key in forging the alliance Pope Francis inked with Communist China against the West. Think I’m exaggerating? I wish I were.

The price? Selling out the “underground Church” of faithful Catholics in China, subjecting them to bishops appointed by and servile to the Communist Party.

Francis’ answer to Vigano? A haughty silence, which Francis and his allies cast as akin to the innocent Jesus standing silent before King Herod. Afraid for his life, Archbishop Vigano remains in hiding. That sounds like a good idea.

Let’s Learn from the Pagan Cannibals How to be Christian

The latest of Francis’ accomplishments? The Synod on the Amazon. Historians will spill millions of words on this subject, but it boils down simply to this. Rich, corrupt German bishops with empty churches want to tell the rest of the Church how to reform itself.

Since no one’s inspired by their epic, Teutonic failure, these Germans have found a strategy. Locate a bunch of quaint primitives who live “in harmony” with nature. Then hold up their hunter-gatherer lifestyle as a model of Christian life. And use the pretext of honoring their pagan culture as a stalking horse for dismantling Catholic doctrines and practices that go back to the Apostles. If anyone objects, accuse him of “racism,” “ethnocentrism” or “cultural imperialism.”

For what these bishops really have in mind, read this interview with a Peruvian expert on liberation theology. The agenda is libertinism in the bedroom, Marxism in politics. And Francis sits behind the scenes, pretending that this stage-managed synod represents the universal Church.

There’s just one Tsetse fly in the ointment. The Church in Amazonia is a joke. A piece of gallows humor, though what’s dying isn’t bodies but souls. The Amazon culture which the rich, fat Germans want to use as a model for remaking the Church is profoundly pagan. We find it as deeply and darkly fallen as the Roman Empire which real Catholics once evangelized. Here are just a few facts which the bishops aren’t advertising:

Upon entering puberty, the men of the tribe usually have several women, including teenagers. Men regularly consume the “Epená” plant or ferrule, which is a hallucinogenic substance. Shamans also use it in healing rituals as a means of identifying a disease by communicating with spirits. …

Infanticide is one deeply rooted “tradition” among the Yanomami. The mother carries it out when she moves away to give birth. She can then either welcome her newborn or kill the child by burying it alive. Infanticide eliminates children born with malformations or as a form of sex selection (males are preferred as a firstborn child). If twins are born, only one is allowed to live. If the two are males, the weaker one is killed. Twin killing is done simply to avoid taking care of two children simultaneously, as the children breastfeed for three years on average.

The Yanomami have a haughty and warlike character. When warriors kill, they acquire the social status of unokai. Those who kill more enemies acquire greater prestige and more women. To attack villages of other tribes, they form alliances with strangers rather than with close relatives. Their war booty involves marrying sisters or daughters of their allies.

One primitive custom of this ethnic group is ritual cannibalism. In a collective and sacred ritual funeral, they cremate the corpse of a dead relative and eat the ashes of the bones, mixing them with “pijiguao” paste (made with the fruit of a kind of palm tree). They believe that the deceased’s vital energy lies in the bones and is thus reintegrated into the family group. A Yanomami who kills an adversary in enemy territory also practices this form of cannibalism to purify himself.

Not One Convert in 53 Years

But emissaries of the Church in the Amazon aren’t trying to convert these people. Beguiled by the fantasy that these “noble savages” have their own way to God, many of the local priests and nuns aren’t preaching the Gospel. Fr. Corrado Dalmonego, leader of the Consolata Catholic mission

brags about an astonishing fact that any traditional missionary would consider a most bitter failure. He celebrates the fact that he is the director of “a mission of presence and dialogue,” in which no one has been baptized for 53 years!

The Church isn’t in the Amazon to spread Christianity, he explains. Instead,

Fr. Dalmonego believes that they can “even help the Church to cleanse herself perhaps from schemes, mental structures that may have become obsolete or inadequate.”

First, Fr. Dalmonego speculates that the Yanomami can help the Church to “defend this world” and to “build an integral ecology” by “establishing bridges between traditional knowledge and the modern, ecological knowledge of Western society.”

Finally, the Church is enriched “by research done on shamanism, mythologies, different knowledge, visions of the world, and visions of God.” This is because strong moments of dialogue help missionaries “discover the essence of our faith, often disguised by ornaments and cultural traditions.

Is this Amazon “church” now Francis’ candidate for instructing the rest of Christians on how to reform our attitudes toward society, man, and nature?

What a morbid, post-Christian farce.