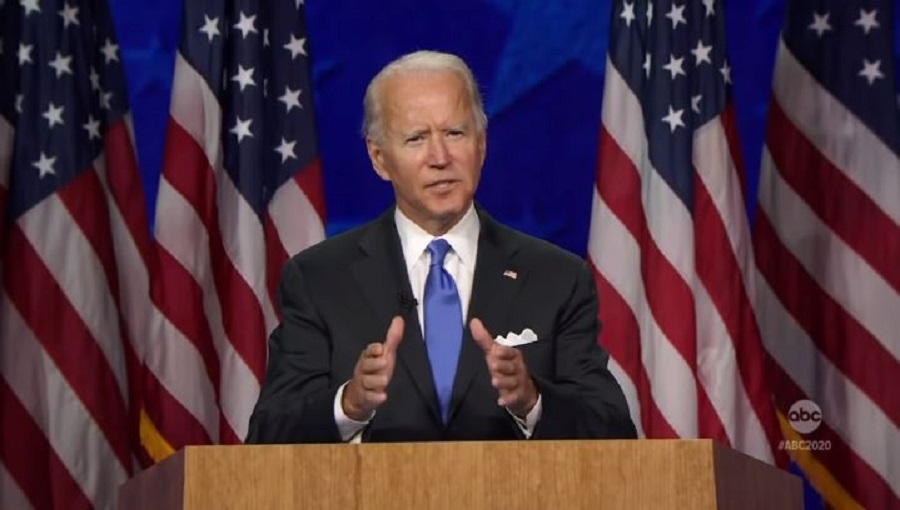 MUIR: You talk about the science. If you’re sworn in come January, and, and we have coronavirus and the flu combining, which many scientists have said is a real possibility, would you be prepared to shut this country down again?

BIDEN: I will be prepared to do whatever it takes to save lives because we cannot get the country moving until we control the virus. That is the fundamental flaw of this administration’s thinking to begin with. In order to keep the country running and moving and the economy growing, and people employed, you have to fix the virus, you have to deal with the virus.

MUIR: So if the scientists say shut it down?

BIDEN: I would shut it down, I would listen to the scientists.

Earlier in the interview Biden had spoken of “listening to the science” while arguing that if Trump had acted “just one week earlier, he would have saved over 37,000 lives.”

It’s a strange phrase — “the science” — when you’re talking about a novel disease. It’s not like there’s just one view on the virus among scientists. Especially not “just one week earlier” than Trump’s actions (presumably in mid-March). Let’s also set aside the fact that it was January 31 when Trump restricted incoming flights from China — a move Biden panned the next day as xenophobic.

Let’s instead focus on the final sentence: “I would shut it down, I would listen to the scientists.” This statement reflects a faulty view of science and of a leader’s job.

A Faulty View of Science

The idea that we should always obey “the science” or “the scientists” is based on the underlying assumption that science represents a monolithic, infallible, unchanging, and unbiased view.

But that’s not what we see in history or in the present day. It was the scientific community that once gave eugenics an aura of respectability. That respectability waned when we learned how the Nazis applied this thinking to murder millions of Jews and other Untermensch. More recently, scientists told us about “junk DNA” — which turned out not to be junk.

In dealing with coronavirus, we were told not to wear face masks by the same scientists who later told us to wear them. A group of influential scientists published a study claiming that hydroxychloroquine was dangerous. Based on this study, the World Health Organization (WHO) paused its trials of the drug. But then the study was retracted and the trials were resumed.

The point is that scientists are neither infallible nor unbiased. Nor is science a static enterprise. As new learning occurs, the “settled” science changes accordingly.

But here’s what gets less notice: With something like a novel, once-in-a-century disease, it’s not as if the scientific community represents a uniform voice. Especially in the first few months. Intelligent people can look at the same new data and reach different conclusions. It’s important that this debate is not stifled. Because it’s precisely this competition of ideas that produces greater discovery and understanding. We should be skeptical of early claims of “scientific consensus.” Such claims can be used to weaponize one theory over others, and to muzzle dissenting voices, leaving us with the blind spots of group think.

Presidents Must Consider the Big Picture

Public policy is about more than science. Health concerns are important, but so are economic and social concerns. So are ethics, justice, and liberty. There are competing interests that need to be weighed. We elect leaders to weigh these competing interests, not to give carte blanche to any one voice. A President should chart the course that, overall, best supports the nation’s flourishing.

As Discovery Institute’s John West put it, scientists have tunnel vision. It’s a feature, not a bug. Scientists focus on one thing to the exclusion of everything else. This focused passion propels them to advance knowledge in a specific area. It’s great for publishing in research journals. But to what extent should it drive public policy?

If your goal is to reduce car accident fatalities, people should not drive on freeways. But that’s not a sacrifice most of us are willing to make. We should also wear seat belts. That is a small inconvenience we’re willing to endure.

A nationwide stay-at-home order would reduce the spread of coronavirus. But we now have good reason to believe that it would also destroy people’s livelihood, lead to increased rates of depression, more domestic violence, unreported child abuse, mental health problems among children, and the health risks that come from not treating other kinds of disease. Biden’s simplistic response suggests he’s not even willing to consider this kind of collateral damage.

New York Times columnist Bret Stephens is no Trump fan. But he called Biden’s “I would shut it down” comment a political blunder. Stephens wrote, “In the hierarchy of fears, what is Covid-19 to a healthy 35-year-old restaurateur next to the prospect of losing everything except a meager government check?” In other words, “staying at home to save lives” makes more sense to some people than to others. And that’s okay. It’s not a one-size-fits-all solution.

Stephens went on to say that “Voters won’t necessarily turn to Biden if they feel he will merely rubber-stamp the same set of policies that they wanted to avoid in the first place. Democracies elect leaders to lead, not defer; to occasionally buck conventional wisdom, not parrot it.”

That’s right. We don’t elect presidents to give away the leadership of the country to a small group of narrowly focused, unelected, and unaccountable scientists. Biden’s flippant remark displayed a naïve view of science and leadership.