‘All Glory to God!’: More Than 300 Inmates in Indiana Jail Baptized Within Past 4 Years. One Atheist Group is Unhappy

An atheist group has accused the Decatur County Detention Center of pushing 'Christianity onto inmates.' 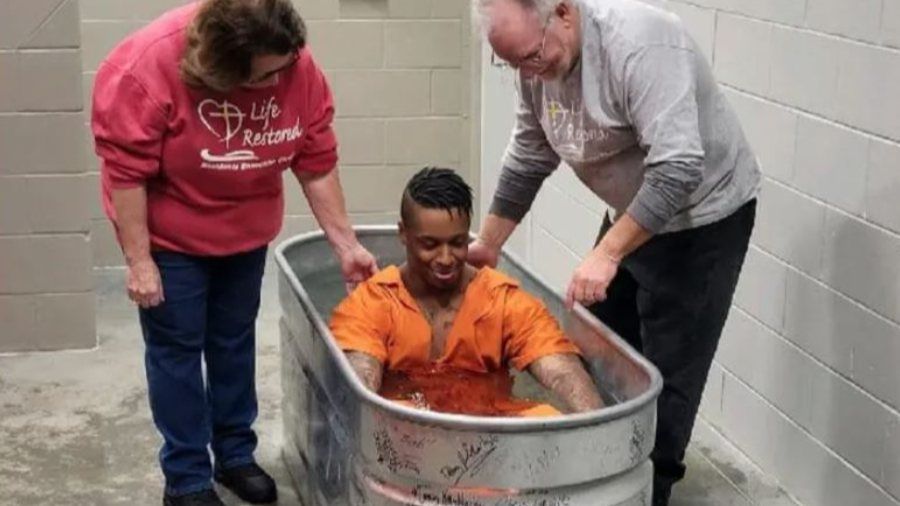 A former Decatur County Sheriff has been accused of “multiple constitutional violations” by an atheist group after more than 300 inmates became baptized over the last four years, Fox News reported.

The Wisconsin-based Freedom From Religion Foundation (FFRF) wrote letters to former Decatur County Sheriff David Durant, claiming that the Decatur County Detention Center (DCDC) is “promoting Christianity and coercing detainees into participating in religious exercises.” The group has demanded that the DCDC stop all promotion of the baptisms into the Christian faith.

On December 29, 2022, the sheriff’s office posted pictures on Facebook of the baptisms. “What a great way to celebrate Christmas and a New Year! DCDC Chaplain Dave Burnett along with REC members baptized nearly 40 men and women after a personal, public profession of Jesus Christ in their lives. Over the past four years, nearly 300 men and women have given their life to Jesus Christ while incarcerated at the Decatur County Detention Center. All glory to GOD!”

FFRF has written multiple letters to Durant, demanding that DCDC stop “its promotion of, and official affiliation with, Christianity on its official social media pages and through its religious events, programs, and activities in violation of the Establishment Clause of the First Amendment.” The current sheriff, Bill Meyerrose, told The Christian Post that he had not seen the letters but knew about the baptisms.

According to Fox News, Durant, who left DCDC effective January 1, 2023, “emphasized both faith-based and non-faith-based rehabilitation programs for inmates during his tenure.”

In a 2019 interview with Daily News, Durant said that “everyone knows that the longest distance to travel is the 18 inches between the head and the heart. If you can change the heart during that journey, everything else will follow suit. Whether it be alcohol or drugs or poverty that are creating the cycle, we only have to change their hearts to stop the process.”

A faith-based program under Durant’s watch, Residents Encountering Christ, offered inmates an opportunity to “examine their lives with the help of Christian counseling and peer-to-peer discussion.”

An inmate whom Durant arrested multiple times wrote to Durant later, thanking him for the program. “I want to thank you and your wife for bringing [Residents Encounter Christ] to our Jail. My life has been forever changed by your golden heart. In Jesus’ name.”