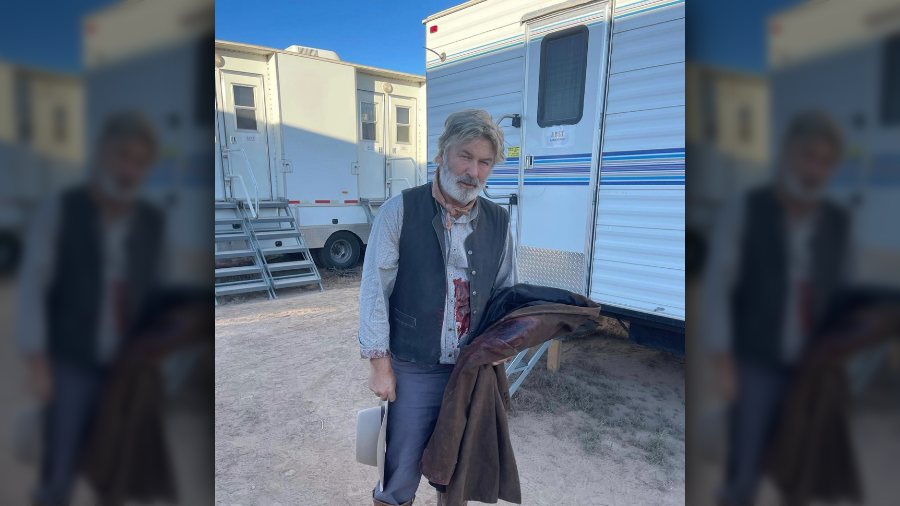 Actor Alec Baldwin on the set of "Rust," hours before he accidentally shot and killed the film's cinematographer with a prop gun. He's now being charged with involuntary manslaughter.

Actor — and gun control advocate — Alec Baldwin will be charged with two counts of involuntary manslaughter in the 2021 accidental shooting death of cinematographer Halyna Hutchins on the set of the movie Rust.

New Mexico District Attorney Mary Carmack-Altwies says she will formally charge Baldwin and armorer Hannah Gutierrez-Reed “before the end of the month.” But don’t expect arrests and perp walks. Instead the pair will face a summons.

Hutchins was killed October 21, 2021, on a ranch on the outskirts of Santa Fe.

Baldwin was rehearsing a scene for the western when the gun fired, killing Hutchins and wounding director Joel Souza. Through a series of catastrophic safety failures and carelessness, the gun Baldwin was handing contained live ammunition.

Carmak-Alwies says Baldwin is culpable not only for being the one to fire the gun, but because as Executive Producer of Rust, he bore ultimate responsibility for the set. That includes ensuring proper safety measures and training. Multiple reports after the shooting revealed how crew members had been very concerned about safety on the set to the point of near walkout.

From the start, Baldwin has tried shirking responsibility for the shooting, pinning the blame on Gutierrez-Reed and Assistant Director David Halls. Halls has copped a plea to a charge of negligent use of a deadly weapon.

“If any one of these three people – Alec Baldwin, Hannah Gutierrez-Reed or David Halls – had done their job, Halyna Hutchins would be alive today. It’s that simple,” Andrea Reeb, the special prosecutor appointed by the DA to the case, said in a statement. “The evidence clearly shows a pattern of criminal disregard for safety on the ‘Rust’ film set.”

A Sequence of Tragic Errors

Inexplicably, carelessly, live ammo was on the set. In fact, Guiterrez-Reed insists she only took rounds from the “dummy” round box. “Never in a million years did Hannah think that live rounds could have been in the ‘dummy’ round box,” an attorney for Guiterrez-Reed said shortly after the fatal accident. “Who put those in there and why is the central question.”

The young armorer spun the cylinder to show Halls what was in the chambers.

Halls handed the gun to the actor, telling him it was “cold.” Standard practice is for actors handed a weapon to check for themselves the gun is safe. That did not happen.

“Every person that handles a gun has a duty to make sure, if they are going to handle that gun — point it at someone and pull the trigger — that it is not going to fire a projectile and kill someone, and this is really about justice for Halyna Hutchins,” Carmack-Altwies told CNN after announcing charges in the case.

The scene would be a close-up of Baldwin pulling out a gun and firing at the camera. For the rehearsal, Hutchins positioned herself behind the camera to check the shot. Putting herself in the line of fire.

Baldwin whips the gun out. A shot. Hutchins is fatally wounded. The actor insists he didn’t pull the trigger, that the gun fired on its own as he drew, a claim an FBI forensics examination showed was not possible.

Even today, Baldwin isn’t cowboy-ing up and taking responsibility.

His attorney Luke Mikas called the charges a “terrible miscarriage of justice.”

This decision distorts Halyna Hutchins’ tragic death and represents a terrible miscarriage of justice. Mr. Baldwin had no reason to believe there was a live bullet in the gun – or anywhere on the movie set. He relied on the professionals with whom he worked, who assured him the gun did not have live rounds. We will fight these charges, and we will win.

Baldwin has already settled a civil case with Hutchins’ family. The terms include Halyna’s husband Matthew becoming an Executive Producer on Rust and filming on the movie resuming in Halyna’s honor. But any additional filming will not be done in New Mexico.

A Second Serving of the Brew: Lost Biscuits, Strange Takes and Bad News for Baldwin