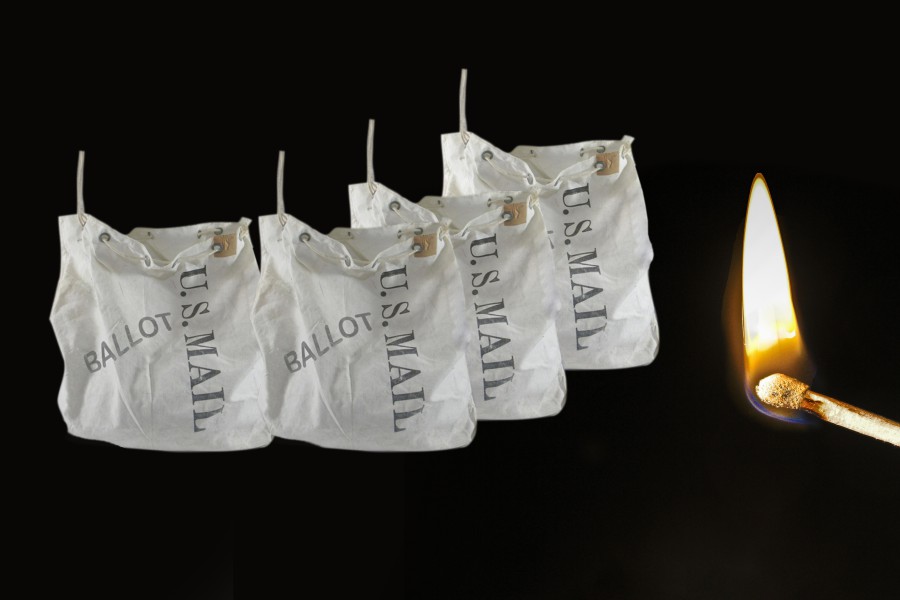 Garland — who has shown zero interest in the countless witnesses who testified under oath to voting irregularities and outright crime —will be investigating swing state audits to see if there are any “voters rights violations.” (Uh, the votes have already been cast, haven’t they, Sherlock?) It’s about intimidation. Trying to scare states into not looking too closely at what happened.

This should not be an attempt by the Biden Administration to suppress the accountability of a dishonest election. That cannot be allowed to happen, nor can the events of the Presidential Election. They want to cancel anything having to do with the result of that election because they know what was done. States cannot allow that to happen and should not be intimidated or suppressed by a government that wants nothing further to do with what took place during that period of time. They want it over with because they seem to know what will be found, and that would be a disaster for them.

Arizona State Senator Wendy Rogers was more blunt: “You will not touch Arizona ballots or machines unless you want to spend time in an Arizona prison.”

You will not touch Arizona ballots or machines unless you want to spend time in an Arizona prison. Maybe you should focus on stopping terrorism. The Justice Department is one of the most corrupt institutions in the USA.https://t.co/Jl2pKNpfJR

“The free state of Arizona will not tolerate this federal meddling,” she said in a follow-up tweet. “If Attorney General Merrick Garland thinks he has a right to our ballots and machines he should go to court. If he uses force when multiple courts have already authorized this audit he will be in violation of the law.”

So why is Garland acting now? Because Arizona’s hand examination of the 2.1 million ballots in Maricopa County is nearly complete. And a host of other states are paying serious attention. And folks are getting nervous.

Arizona is hot. And not just 110 degrees in the shade hot. By that I mean, it’s the must destination if you are a state lawmaker interested in voter integrity. State officials from all over the country have been descending on Arizona’s audit like actors flying in for Sundance.

Yes, Pennsylvania representatives have been there. And Georgia, Wisconsin. Michigan. The swing states with the most unusual and suspicious tallies and activities. But also state officials from Virginia, Alaska, Colorado, Utah and Oklahoma have come to study how the audit is operating.

So how is the Arizona audit going? The hand-recount portion is wrapping up. They’re down to the final pallet.

One issue that should be immediately clear. Are there as many ballots as there were ballots tabulated? 2.1 million ballots were tabulated. What happens if there aren’t 2.1 million actual ballots? OAN’s Christiana Bobb reported some of the boxes are coming up 20% short of what is supposed to be in them. Boris Epshteyn on Bannon’s War Room put the figure at 25%.

CD Media’s hearing whispers the count is coming up about 200,000 ballots short. If true — or even anywhere near true — Arizona has a massive problem.

A reminder: According to the official tally, Biden carried Arizona by less than 10,500 votes.

Hey, Merrick Garland! Did you check out these two articles out last week? They’ll introduce you to four veteran poll workers who saw “pristine” ballots in Fulton County. All without blemish or fold. All with Biden’s name perfectly filled in. Well, except for an odd crescent-shaped mark on the same place on every single one. Just as if someone had photocopied the ballots.

Aren’t you the least bit curious?

A reminder: According to the official tally, Biden carried Georgia by less than 12,000 votes.

Antrim County is where 6,000 votes mysteriously switched from Donald Trump to Joe Biden. A switch that was only caught because a county election worker found the Biden total suspicious. The official story is 6,000 vote switch was a simple human error. Nothing to see, folks. Certainly no computer hanky-panky.

But was it something more? Could the system have been hacked? (Investigators in the Antrim forensic audit earlier found that security and adjudication logs from Antrim County had been removed.)

Dominion Systems insist the systems cannot be accessed by internet. If DePerno’s claim proves true, that blows that story out of the water. While waiting to see if these claims are proven true, let’s take care of a basic question first: Are our systems subject to easy hacker access?

The Mainstream Media was convinced of it … right up to November 3. For example, check out this NBC News story from January 10, 2020 about ES&S.

“While the company’s website states that “zero” of its voting tabulators are connected to the internet, ES&S told NBC News 14,000 of their DS200 tabulators with online modems are currently in use around the country.”https://t.co/FRF0aY7mkQ via @nbcnews

One important reason to highlight attorney DePerno.  Michigan’s radical Secretary of State Jocelyn Benson and Attorney General Dana Nessel have been threatening to disbar any lawyers that pursue 2020 cases challenging the outcome.

Kill 6,000 people and you have a right to a lawyer. Wanna know why 6,000 votes switched from one candidate to another? We’re coming after your attorney.

One more thing. A new Rasmussen Poll shows that a majority of Americans now think the fix was in. 51% believe cheating effected the outcome in November … up from 47% in November. This despite the media mocking, Big Tech censoring, and elected officials threatening.

Oh, and according to Rasmussen, the poll was weighted +2 for Democrats.

“The Big Lie” mantra is starting to fall the way of the Trump-Russia Collusion Hoax.

One amusing sign is what you’re seeing in Major League Baseball stadiums across the U.S. Fans, led by a man named Dion Cini, have been unfurling huge “Trump Won” banners during games. Making it even more hysterical, you’re seeing these banners in parks in heavily Democratic cities. Fenway Park, Yankee Stadium, Citi Field, home of the Mets. Miami.

Thank you ladies & gentlemen of Philadelphia, it was our honor to serve you. #TrumpWon #SaveAmerica https://t.co/y3L6QT4bV6 pic.twitter.com/QuCBrihsHv