After 20 years planting churches in Niger, Neal and Danette Childs have made a hand-off. They discuss the joys and challenges of missions as their team transitions to new leadership. 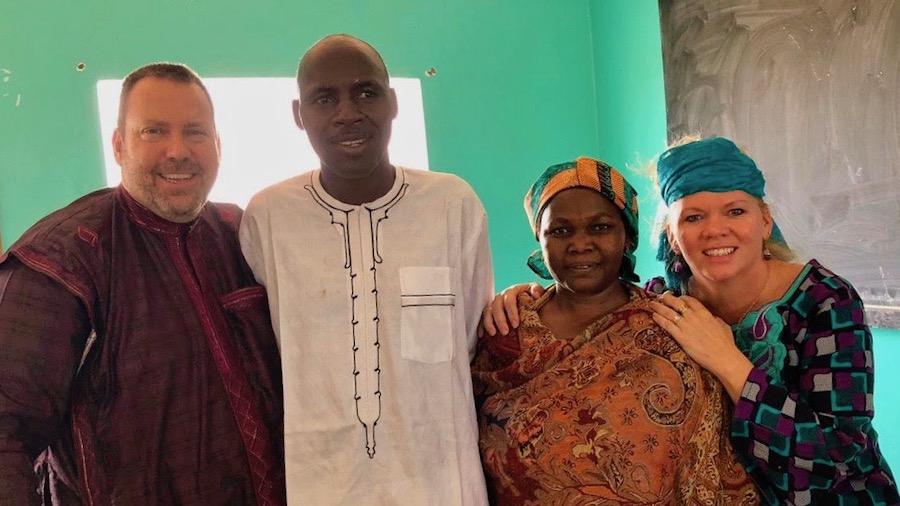 Christian missionaries Neal and Danette Childs have served in the west African nation of Niger since 1998. Though they continue humanitarian work and teaching in the impoverished country, the board of Vie Abondante (“Abundant Life”) recently handed off leadership to Pastor Hashimou Ousmane. The Nigerien national has long been involved in this thriving ministry.

“What we’re doing is not just about this moment,” said Neal Childs in an earlier interview. “If there’s anything I would be afraid of in my time in Niger, it’s that after I’ve served and given my life for the gospel in this land, that the work wouldn’t continue were I to leave.” The Childs’ global work operates under the banner RUN International, an acronym for “reaching unreached nations.”

Childs and his wife Danette explicitly reject fear of terrorism as they minister to unreached people groups across the globe. In a phone interview, they share what planting churches brings to Niger, why education matters and how worship in African nations is nothing like the West.

Raising Up Churches in Remote Villages

Your team has planted 52 churches in partnership with African leaders. What does establishing a church bring into a local community?

Neal: Usually the people have never heard the message of Jesus. Niger is so isolated, these are remote villages with no electricity and no water. Some of the villages have cell phone coverage but they don’t have internet access or any of that.

When we go in to plant a church, it’s starting out with evangelism — preaching the gospel. Then we emphasize discipleship. When people receive Christ, we want to give some kind of steady, structured teaching. We offer to anyone the opportunity to enter a discipleship program. They can come to a school for a few days, located in different areas, then go back home on the weekend.

It’s an intensive discipleship program. We find it’s very important in terms of establishing the gospel in their hearts when they’ve never had any understanding. The current literacy rate is very low, which makes the discipleship process more difficult. When we plant churches, we also start literacy training in that church to teach people how to read and write.

In some villages, we help with famine relief and providing a new water source. We’ve been digging wells for a couple years now. A ministry in Texas gave us a well-digging rig, then another ministry helped train some of our people. Now coming into an area effects the community beyond the walls of that new church.

How does your team determine a new church has been planted?

Neal: Some movements are loose in what they call a church plant. This one guy refers to “tree churches.” Wherever he goes, if they gather under a tree, he’ll call them a church. In our ministry, using research among various movements, we came up with what we consider a church plant.

We have more than 52 places that we minister and where people have responded to the gospel. If we’re going to call it a church plant, it’s because it meets four criteria. Number one, the group of people are meeting regularly. Jesus said, “Where two or three are gathered” — so it could be a small group. But they’re meeting regularly.

“When we plant churches, we also start literacy training in that church to teach people how to read and write. Now coming in to an area effects the community beyond the walls of that new church.”

Second and third, they follow the two ordinances Jesus gave to the church. That is, they participate in water baptism for converts. And they practice the Lord’s Supper; from time to time, they take communion.

The fourth one is a big distinguisher for us. We believe that the church is to have a shepherd, a pastor who has been placed to lead the flock. We believe before we call it a church plant, that there is a trained pastor who has the call of God.

In addition to the children’s camps you’ve discussed, how else is Vie Abondante involved in education — both academic and Christian discipleship?

Neal: We have established schools in both major cities where ministry happens, in Maradi and also the capital city of Niamey. They are kindergarten through 6th grade, with 600 children enrolled between the two schools.

In the Maradi school, we haven’t had that much freedom because we opened the school before there was a way to declare your school as Christian. We were doing it to help. In our Niamey school, we opened it as a Christian school. We can pray and do Bible stories in that setting. However, even there, the government frowns on it if there’s too much praying for the kids.

“As missionaries, my dad, my mom and then my family were sent to bring the gospel. But this was birthed within the hearts of the people of Niger.”

Some Nigerian missionaries working with us helped to establish a home in Maradi called Abraham’s Place. There are 20 villages in that region that often don’t have access to good education. This unique children’s home is a way to help our pastors and church members who are serving out in these villages. In a discipleship setting, they learn skills beyond academics.

Danette: They’re learning cooking, sewing and music. They target where their skills are, find out what they’re good at, go after those things and develop those abilities. The home is set up in a way that all the different age groups are there. They work as a big family.

Neal: Abraham’s Place encourages and disciples children who are believers. They’re being built up and then able to shine as a light in their local schools.

The leadership of Vie Abondante recently transitioned to a pastor who is a Nigerien national. What led you and the team to take that step? Neal: From day one, the heart of this ministry was to raise up an indigenous church in Niger. As missionaries, my dad, my mom and then my family were sent to bring the gospel. But this was birthed within the hearts of the people of Niger. It’s been a team effort from the beginning.

The whole goal when it was started was that a Nigerien leader would be at the helm. We felt like the timing was now. There are some things a Nigerien national can do that I cannot do. We felt like the ministry was mature enough, and Pastor Hashimou Ousmane is God’s choice. He has the heart of a father for the people of Niger and for Vie Abondante. All the leaders of the ministry knew in our hearts; we are in agreement.

Eight people are on executive council of the ministry, which I still serve on. I’m no longer the lead of that board, now it’s Pastor Hashimou. With that, there is a little less responsibility on my shoulders. We’re still fully involved there. I am continuing to teach in the Bible schools, to train pastors and visit the churches.

The Joy of Worship

You often travel across Africa and around the world. How do you find worship styles and response differ in Africa versus in the U.S.?

Neal: One of the strengths of your typical African believer is knowing how to pray. They have a strong prayer discipline in their life. Praise is big here. The all-out declaring Jesus is Lord, the dancing, rejoicing — you can’t beat it.

Of anywhere I’ve been, Africa and especially Niger has the greatest praise. I love the worship in the U.S. when I come to churches here. We know how to praise in Africa, but the intimate time of worshipping the Lord, I love what I experience in American churches.

Danette: Niger is not only one of the poorest places in the world, it’s also one of the hottest. During summer season, I remember being in a service on a Sunday morning and the people were dancing and worshipping. Sweat was flying everywhere, puddles of sweat at your feet — and I am not exaggerating. Everybody is going for it, worshipping God.

At that moment as the drums continued, I was so hot standing there. I was thinking, I just want to be done with this service so I can go home, take a shower, turn on our A/C and sit in front of a fan.Then a voice spoke to me in my heart, I believe it was from the Lord.

He said, Look at these people and the way they are passionately worshipping me. They’re going home to not even electricity. Not even a drink of cold water. Yet they’re worshipping with passionate joy and not thinking about themselves or how miserable they feel. It was a real slap in the face for me.

Believers who visit Niger, mostly from the U.S., are often reserved. When they’re in one of these services, at first they are standing there with their mouths hanging open. After a while, they can’t help themselves but to get involved in worship.

Several people over the years have said: Why can’t we have this in the U.S.? I wish I could bottle this experience and bring it home.

Learn more about the ministry of Vie Abondante. Explore The Stream’s complete missions coverage, and sign up to receive top stories every week.