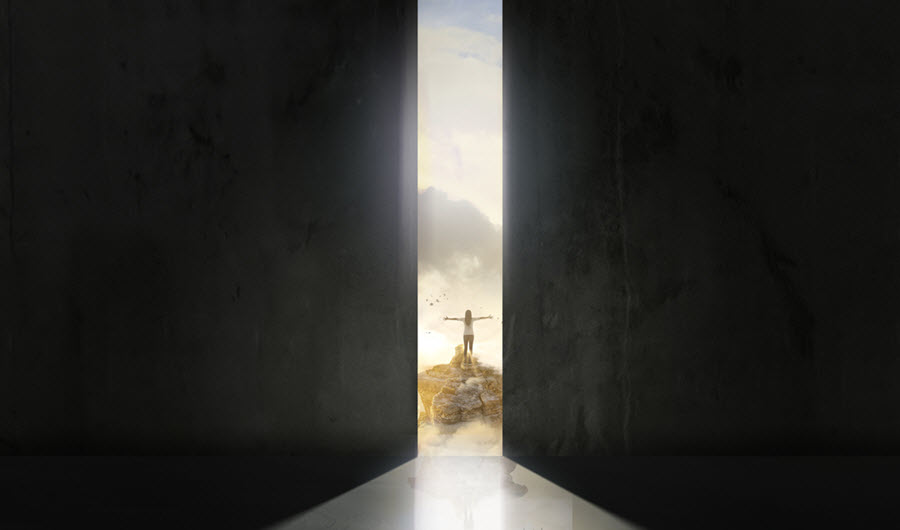 While I hope for good things under the tree, I’ve already received the best Advent/Christmas gift anyone has ever given me. A friend sent me this email from his ICU bed: “As I lie here in a hospital bed on a ventilator after literally dying 4 weeks ago … God is good. I did get a glimpse of the other side … glorious.”

Ah, the Christmas season. Contemplating the coming of the Christ Child and looking forward to Christmas Day. “Angels from the Realms of Glory,” “Silent Night,” “O, Holy Night,” along with a few ditties like “Santa Claus is Coming to Town” and “Silver Bells” ring in our ears as we decorate and shop for gifts.

After all, the birth of Jesus is the beginning of our salvation and hope. So at Christmas — beginning with Advent — we put first things first.

Yet as strange as it may seem, most of Advent is traditionally not about Jesus’ birth in Bethlehem at all. Rather than putting first things first, we’re encouraged to put last things first.

Advent Draws Our Attention to the Last Things

I’ve been praying the psalms and reading scripture daily for more than ten years using the Liturgy of the Hours. And it still comes as an annual surprise that from the beginning of Advent until December 17, there is very little about Jesus’ birth in Bethlehem.

The same is true of readings at Mass. Last week we heard 1 Corinthians 1:3-9, where Paul promises his readers that Jesus will “keep you firm to the end, irreproachable on the day of our Lord Jesus Christ.” This week, Peter (2 Peter 3:8-14) warned that “the day of the Lord will come like a thief, and then the heavens will pass away with a mighty roar and the elements will be dissolved by fire, and the earth and everything done on it will be found out.”

That is, Advent is less the run-up to Jesus’ first coming as the child of Mary as it is an extended meditation on His Second Coming in glory as king and judge. He will return as king and judge of everyone and everything. Thus Advent draws our attention to the four last things: death, judgment, Heaven and Hell.

‘Beloved, We Are God’s Children Now’

Of course the Nativity of Our Lord, His coming in the flesh, is critical to Christian theology and Christian living. No question about that. But if we stop there, it can lead — it has led and it always will lead — to sentimentality.

Thinking about last things first puts His nativity in context, supplying us with the purpose of His birth at Bethlehem.

And indeed the scene is heartwarming. But this baby’s whole destiny has to do with death, judgment, Heaven and Hell. Separating the child in the manger from the Lord of Glory is a theological and practical mistake.

This baby is not what He seems. The helpless newborn asleep in the hay is the One to Whom we are answerable all our thoughts, words, and actions from childhood to old age. There is nothing heartwarming about that.

Thinking about last things first puts His nativity in context, supplying us with the purpose of His birth at Bethlehem.

Justification, yes. Adoption, yes. But there’s more. “Beloved, we are God’s children now,” wrote St. John, “it does not yet appear what we shall be, but we know that when he appears we shall be like him, for we shall see him as he is” (1 John 3:2).

Or as St. Irenaeus in the second century A.D. put it, “He became what we are so that we might become what He is.”

Waiting for God to Come

From the beginning we were made to see God and to become like Him — to become what He is, sharing His divine life. That is the plan of the ages. That’s where all of salvation history is going: we shall see Him and we shall be like Him. This is the eternal life of Heaven.

Losing that life, not seeing Him, and thus not fulfilling that for which we were made, is Hell.

The Nativity is a part of this great purpose. Along with the cross and the resurrection it happened in the past. The Second Coming of Christ as Judge is future. That story is not over — yet. But a day will come when the story of this Earth and our lives here will come to an end. It will either be the day when, as Peter put it, “the heavens will pass away with a mighty roar” or it will be the day we die.

Advent is the season of waiting for God to come. Like the shepherds, we greet Him as the baby in the manger. Like all the saints of old, we prepare to greet Him as the Lord of Glory coming to judge the living and the dead and make all things new.

“I did get a glimpse of the other side … glorious.”

So this Advent, put last things first as we cry out, “Come, Lord Jesus!”

Not Secular, Not Religious, but Christian

The Reason for the Season of Advent