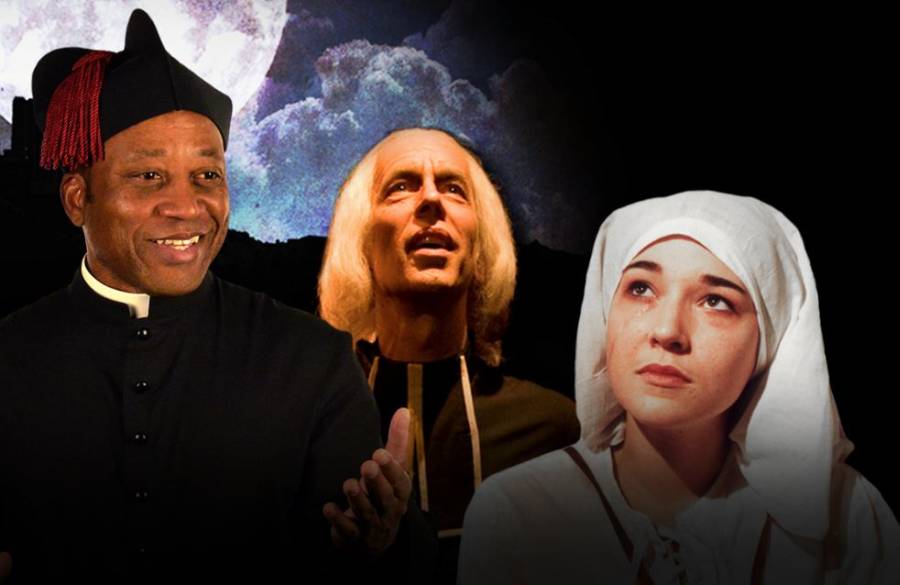 I first heard about her in the summer of 2016, a few weeks after my father’s death.

Saint Luke Productions, an intrepid Catholic theater company founded in Portland, Ore., in 1980, was staging a play about Maria Faustina Kowalska. I had never heard about this Polish nun and mystic born on this day in 1905. In 1931, she had a vision of Jesus in a white robe with his left hand to his chest. From it streamed rays of light, signifying God’s never-ending mercy toward sinners. I’d seen devotional cards and paintings of that image a zillion times and it felt mawkish and sentimental.

Her visions of Christ were misunderstood by nearly everyone. She created the popular Divine Mercy devotion, and was eventually declared a saint in 2000 by fellow Pole Pope John Paul II, who made the Sunday after Easter as Divine Mercy Sunday for the entire Catholic Church. I went to the play to learn more. I became very drawn by the story of this woman and by the actress Maria Vargo who played Faustina during 90-minute-long set.

Four years later, Saint Luke Productions (SLP) is finishing up editing Heart of Mercy, a film adaptation of the Faustina play with special effects that describes Faustina’s many visions of heaven and hell. It stars Maria Vargo in the lead role.

One-person dramas staged by Saint Luke Productions tend to be captivating. Aided by a multi-media presentation whereby the voice and images are projected on a back screen, a lone actor or actress, dressed in period costume, portrays the saint in such a convincing manner that it’s easy to imagine he or she has come back to life.

Unlike many drama groups, SLP has no home theater, so it performs in make-shift theaters such as church gyms, prisons, hotels, nursing homes, convents and schools. 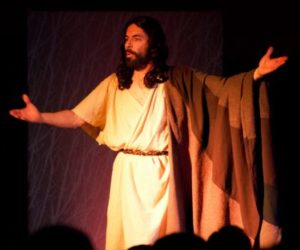 Because of Covid-19, SLP has had to stop all its live theater productions —its bread and butter — that were touring the country when the virus hit in March. Besides the Faustina play, the company offers plays about John Vianney, Augustine, Maximilian Kolbe and Augustus Tolton, the late 19th century Chicago priest who is on his way to being named America’s first black saint.

“We’re unique among Christian theaters in doing live drama of the saints,” says Leonardo Defilippis, who founded SLP as a non-profit while acting in Oregon’s famed Ashland Shakespeare Festival. “It’s more intimate and impactful than movies and television. The audience feels it. You see them all weeping. It’s hard to do that in a movie.”

In the late 1970s, he had been wanting to add more openly Christian material to his repertoire, so he did a private portrayal of Luke for his fellow Shakespeare actors on one of the festival stages. It got a good reception. One of the actresses, Patti Slover, was particularly supportive. The two eventually married in 1983.

Defilippis left the Shakespeare Festival to strike out on his own in performances around Oregon. His first few plays were straight recitations from the first six chapters of the Gospel of Luke, the Passion narrative in Luke, all 21 chapters of Gospel of John and, in 1982, Saint Francis, Troubadour of God’s Peace, commemorating the 800th anniversary of the saint’s birth. The latter got him a write-up in Christianity Today and hundreds of bookings around the country.

Other one-man shows petered out while Defilippis hung on, supported by Patti, who was his stage director and co-screenwriter. His wanted to portray Catholic saints, a vast array of colorful personalities who’d not been portrayed by any theater production he knew of.

“I never thought we’d continue this, but I was moved by the response of the people and the effect of the shows,” he says. Afterwards, people would approach the actor as if he was that saint or even Jesus himself, which moved Defilippis tremendously. He began to realize what a huge spiritual responsibility he’d taken on.

“When I play Jesus in the Gospel of John, sometimes I could feel the power of Jesus speaking to his people,” he says. “You felt you were an instrument of God because you were portraying him.” John’s gospel is particularly profound, he adds. There is nothing in world literature like it.

Creating Plays Out of Nothing

“I have been artistically challenged to take on things that never existed,” he says. “I have no one to talk to about this. No other Catholic or Christian actor has taken on these saints. You have to create this stuff out of nothing. These characters have never been done.”

One was John of the Cross, a play requested by Discalced Carmelite nuns to commemorate the 400th anniversary of his death. After a U.S. run, it was performed in England, Malta and Ireland in 1990. Another was Maximilian Kolbe, the World War II martyr whose story Defilippis did before a packed house at the Paramount Theater in Denver during World Youth Day in 1993.

Defilippis was the sole actor doing all these roles until 1997, when SLP expanded to its first play about a woman: Thérèse of Lisieux, on the 100th anniversary of her death. This too was commissioned by the Carmelites. The musical soundtrack for Thérèse was written by a cloistered nun in Seattle, and when it was recorded for the play, several of the nun’s siblings played in the orchestra.

That same year, SLP filmed the play about John of the Cross in traditional Spanish mission locations in California. For both plays, Defilippis used live orchestras, which set him back $35,000 a day.

Then he and Maggie Mahrt, the 19-year-old actress playing Thérèse, performed Maximilian and Thérèse during World Youth Day in Rome in 2000. After that SLP took on the creation of a feature film about Thérèse. Edited in Culver City and Burbank, Calif., and screened at Sony Pictures and Warner Brothers studios, it was a triumph for SLP, the first Catholic film company to distribute a major motion picture for theatrical release. The 96-minute film reel even got blessed by Pope John Paul II in 2003, who watched the movie while at his summer residence in Castel Gandolfo.

Although the movie was released in October 2004 in 300 major movie theaters and brought in about $2 million in box office receipts, it got lackluster reviews from critics. It took SLP years to pay off the debts accrued from the filming and distribution.

“We were way over our heads with that movie,” Defilippis admits. Along with those expenses were the costs of relocating across the Columbia River to southwestern Washington state and cheaper real estate just north of the rapidly growing city of Vancouver. SLP built a 3,100-square foot building containing offices and a movie studio. 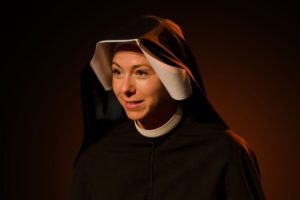 Fortunately, a conjunction of events put SLP back into the black. Defilippis was fascinated by the life of French priest John Vianney, the patron saint of priests. He wrote an engaging play about the aging cleric right before Pope Benedict XVI named 2009 “the year of the priest.” This fortunate coincidence got him invited to perform his new play in front of the U.S. Conference of Catholic Bishops annual meeting that November.

I was one of the reporters covering the bishops’ meeting and I stayed late that night to watch Defilippis’ moving performance of priest who was considered a dolt by his peers. However, his holiness and supernatural powers brought crowds to his obscure parish to confess their sins. Only a few dozen bishops showed up, but that was enough to result in 150 invitations around the country the next year.

“That was the biggest interest in any play we’ve ever done,” said Defilippis. “Vianney was so fascinating as a person; quirky and vulnerable. He’d just sit there and yell at the devil.”

During all this time, Patti was having seven children, four of whom were named after characters that her husband was playing around the country. The couple wanted to make a public point that one could have a family while pursuing the arts, but there were few other models out there.

“What other Catholic actor — other than Mel Gibson — has a large family?” Defilippis asks. “I had to look to artists in other fields because we didn’t see them in the movie and theater world.”

He did get some inspiration from some of the Catholic actors on his sets. In the year 2000, when Faustina was made a saint, he noticed them employing a series of prayers inspired by Faustina. “I began to ask who is this Faustina?”

Defilippis eventually wrote the play Faustina: Messenger of Divine Mercy. 80 women applied for the lead role. Among the saint’s visions were premonitions of the coming priestly sex abuse scandals that would come to light in the early 21st century. She would see Jesus being tortured for these sins. The actor who played this part in the stage play and film is Jonathan Roumie, who has since gone on to star as Jesus in “The Chosen,” a new online series about the Gospels.

Because Covid has dried up funding for SLP, the release of the Faustina movie — and other projects SLP is trying to roll out during the theater hiatus — depends on finances. They need $250,000 just to finish the film and close to $1 million for marketing, dubbing in other languages, distribution and staff salaries.

A Culture Known By Its Art

Both Leonardo and Patti Defilippis, now in their mid-60s, are also hoping for a new generation of actors and filmmakers to eventually take over their work. He’s looking for people, sympathetic to their mission, to be artistic directors, fundraisers, screenwriters and an executive director as they look to eventually retire.

“I want to create a culture and civilization that is Judeo-Christian and known by its art,” he says. “Right now there isn’t that movement; it’s a cancel culture now. But, if we can keep that vision alive as all great cultures have done, maybe it can inspire other art. Live drama is a dying culture in theater, but we want to keep it alive.”

A veteran journalist and writer, Julia Duin has written and worked for several major newspapers, including the Washington Post, the Wall Street Journal, and the Washington Times. She blogs at GetReligion. Her latest book is In the House of the Serpent Handler: A Story of Faith and Fleeting Fame in an Age of Social Media. Read more about her and her writing at Julia Duin.