A Thriller That Takes Evil Seriously: ‘Prey for the Devil’

This film even highlights the links between the demonic and abortion. 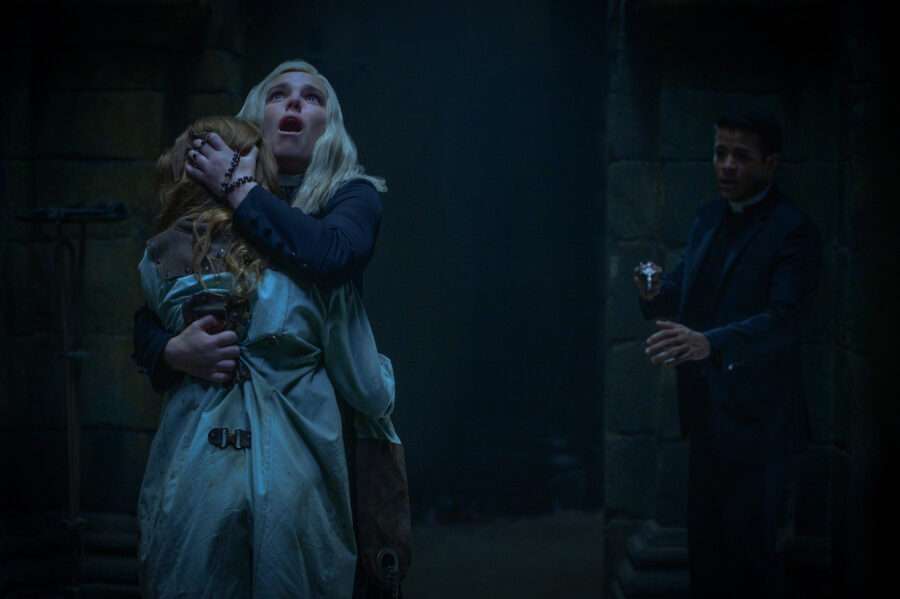 Halloween is my favorite time of year. I like the spooky, spectral decorations that fill up people’s lawns even better than Christmas lights. Don’t ask me why! Perhaps I treasure the sense of all of us facing the uncanny, the transient, the fleeting aspects of our lives, when contrasted with eternity. I also savor the religious feasts which originated the day (All Saints, All Souls) with their exquisite prayers and songs.

One thing I usually don’t look forward to are the movies that get released. I can’t stand gory “slasher” films — not even the “mild,” satirical versions like Scream. I cringe at gratuitous violence. Nor can I really stand the arbitrary, mindless “spookiness” of films like Stephen King’s. They never make the case for why these awful things keep happening, in a consistent fictional universe that lets me suspend my disbelief. (Okay, so a killer clown just … lives in the sewer. Don’t ask why, just turn off your brain for a while.)

From time to time a film comes out that offers something different. It provides the visceral thrills and chills that offer us catharsis. But it does so by taking evil seriously, by grounding visible threats in the real invisible war that envelops us all our lives: the struggle between God and Satan over the fate of each human soul. Prey for the Devil is such a film.

Spiritual Combat at its Most Raw

The new movie is part of a burgeoning subgenre, the exorcism thriller. Launched long ago by the viscerally shocking The Exorcist, this niche has included such worthy movies as The Exorcism of Emily Rose and The Rite, both of which I’ve recommended.

Maybe one reason I like such films is that the writers usually bind themselves to the metaphysical premises of the Church. So they locate evil where it really exists, in the influence of fallen angels and the fallen hearts of men. They show spiritual combat at its most raw and visceral, as ministers of the Gospel imitate Christ by casting out demons.

Empathy for the Bedeviled

Prey for the Devil has a difference, which is more than a gimmick. In this story, the person committed to rescuing souls from infernal affliction is not a priest but a nun. Sister Ann grew up abused by a mother who was subject to demonic influence, and so has committed her life to succoring others so afflicted. She has a unique empathy for the “cases” at the institute for exorcism training where she audits classes intended for priests. She has walked a mile in their shoes, so to speak. And she has unique spiritual insights that can make a difference.

Sister Ann, unlike the male exorcists, feels a maternal bond with one young girl who suffers possession. She focuses firmly on the intrinsic human dignity of these violated souls, and strives to reach them behind their symptoms and manifestations, so they can assist the priests in banishing spirits of evil. She sees in them despite everything the stubborn image of God.

I don’t want to spoil the story. Expect lots of spooky surprises, a fabulous (literal) Gothic atmosphere, and serious doses of theological truth about the war between good and evil. This PG-13 film would make a decent family trip to the movies for mature teens, and might serve as a launching point for talking about some serious issues — for instance, the fact that dabbling with the occult is a “gateway” for malicious spirits. Even more substantive in the film is the link between the demonic and abortion, as one victim of possession turns out to have fallen into despair after ending her child’s life. Lots of fodder for conversation, and further reading.

I’ll complain just a bit about several needless and goofy nods to feminism which the filmmakers must have felt obliged to make — especially the scene where Sister Ann cross-dresses as a priest to help in an exorcism. The director needs to realize something: Catholics who believe in the ordination of women don’t believe in the devil. They may not even believe in God, at least not in the biblical sense. Read Ungodly Rage, by Donna Steichen — an author who infiltrated Catholic feminist circles demanding the priesthood for women. She found that few of the women who wanted Holy Orders believed in the priesthood in the first place, and many were actually Pantheists instead of Christians.

But none of this ruins the film, which is solid entertainment and mostly high-grade theology. Prey for the Devil offers a fun night at the movies that actually leaves you pondering, and most of all (if you’re smart) praying for protection: “Deliver us from evil.”