A Tale of Two Presidents at Union Station 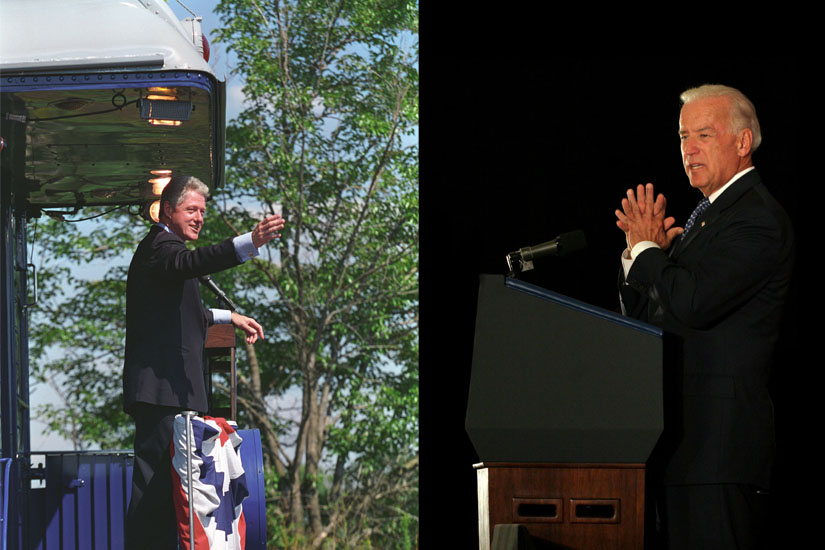 Christmas 1993 … or perhaps it was ’92. We were romping through the gloriously remodeled, breathtaking and bustling Union Station, drifting in and out of the fancy stores that lined the front third of the massive structure. Marveling at the gold-plated ceiling that soared several stories above us in the great hall. A room so big they say it could have fit the entire U.S. Army in World War I.

The lights from decorated Christmas trees, garland and window displays reflected off the highly polished floors. Christmas music played. Perhaps there was a string quartet on the rise leading up to a fancy eatery too rich for me, but perfect for the power brokers dining after doing the people’s work across the street at the Capitol.

I parked an annoying amount of time for my companions at a wonderful shop loaded with political merchandise and memorabilia. Maybe you didn’t want a Bill Clinton bobble head or soap imprinted with the face of Ross Perot, or George H.W. toilet paper. But an actual Teddy Roosevelt campaign button, or the 45 of a JFK campaign song?

From the east wing of Union Station, we started to sense a buzz. People were drifting that direction, pointing excitedly. Naturally, we wanted to see what the fuss was about. The murmurs soon became audible. “Clinton’s here.” “What?” “Yeah, that’s Bill and Hillary.”

Sure enough, through the doors leading into a collection of boutique stores we could see President Clinton and his wife strolling around. Not much different than we had been. Apart from a few Secret Service, they could have been any other Boomer couple seeking Christmas gifts on a frosty December night.

Our fellow shoppers had to be a mix of Democrats and Republicans. In fact, given Union Station’s location on Capitol Hill, it’s a good bet a good percentage were hard core partisans.

No matter. The atmosphere was electric and positive and warm. Together, red and blue, in Union Station.

Joe Biden went to Union Station last night. Not to shop for gifts because most of the stores have gone under. (Thank you, Mayor Bowser.) He was scrounging for votes. Telling a desperate tale as pathetic as any invented by the panhandlers that now plague the station. Spitting on half the nation with the meanness of a deranged, drugged vagrant you have to scurry around on your way to the Metro or Amtrak.

“Democracy itself is on the ballot next week,” he bellowed. “American democracy is under attack!”  Beware the “extreme MAGA Republicans!” The crazed drugged out hippy nudist from Berkeley who assaulted Paul Pelosi symbolizes Republican political violence. Voting for the GOP will send the country on a “path to chaos!” Tyranny and gloom await!

“There is the president.” No one watching could possibly feel proud, happy or connected.

Joe Biden has abandoned all attempts at Union.

It Doesn’t Have to Be This Way

I can’t help but thinking of Bill Clinton this morning. Love him or hate him politically, you never got the impression during his eight years that he loathed those who didn’t vote for him. His “I feel your pain” came across as genuine. He strongly believed in his ability to convince you he was right. He didn’t feel the need to insult, demonize, silence … or jail … those who opposed him.

Clinton governed with optimism. “I still believe in a place called Hope.” After his 1994 midterm shellacking, he governed with pragmatism.

He also governed with enthusiasm. He enjoyed the tussle of debate. He enjoyed crafting legislation. He enjoyed the job of being president. Even after eight years of scandal and investigations and the natural wear and tear from the burden of being Commander-in-Chief, he seemed as giddy as ever about the gig.

Bill Clinton enjoyed serving the American people. All the people.

Joe Biden’s address demonstrated again he has nothing but contempt for half the American people, and little true regard for well-being of the rest. And he’s miserable in the process.

Not a Peep on What Concerns The People He Serves

Last night, six days out from the midterm elections, addressing a nation that is enduring real hurt and the prospect of a devastating winter of shortages and shutdowns, of choosing between warmth and food, Biden spoke only of the dire threat posed by his political opponents. In other words, the threat to his own power.

The RNC released this shocking compilation:

Biden just wrapped up a primetime speech six days before the election. Here are the number of times he mentioned…

It’s not that Biden’s tone deaf. In his arrogance, he has zero interest in listening. Feel our pain? He seems to take a sadistic glee in inflicting it. Or else a criminal indifference to it. Nobody will put any hurt on “the Bidens.”

Last night, Joe Biden went to Union Station. He could have invited us all on board with Hope. Togetherness. Common Cause. Unity.

Tragically, that train has departed empty.

The good news is a new train pulls in on Tuesday. We can climb aboard with a new direction, new conductors. And we can look forward again to the day where we can say proudly, as one, “There’s the president.”