"Manhood is a difficult journey, and it was never meant to be walked alone," says Promise Keepers President Vance Day. 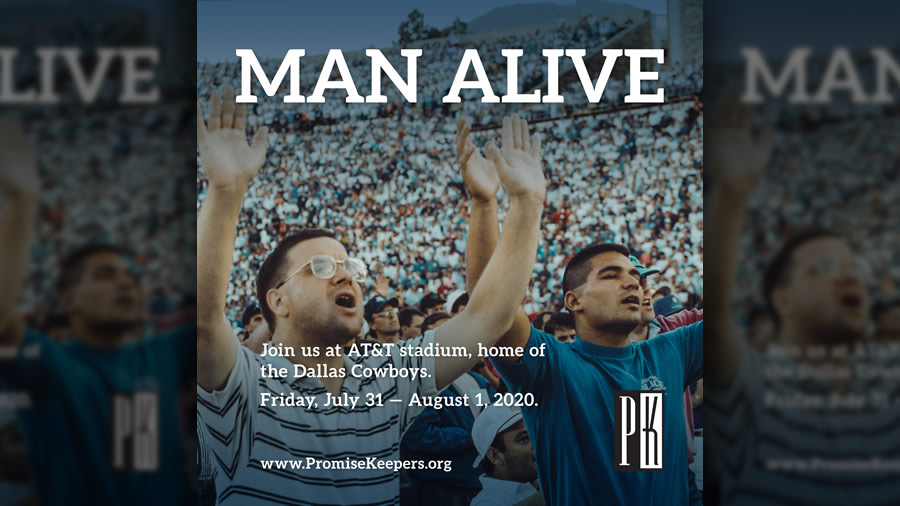 Thirty years after the founding of the Promise Keepers movement, the flame has been lit again.

80,000 Christian men are expected to gather at AT&T Stadium in Arlington, Texas on July 31-August 1 to worship, fellowship and unite at Promise Keepers 2020. “Manhood is a difficult journey, and it was never meant to be walked alone,” says Promise Keepers President Vance Day.

The seven principles upon which our speakers will base their messages are the same that sparked a transformational movement in the hearts of millions of men more than two decades ago, resulting in countless changed lives. It’s our earnest desire to instill those same values into the Promise Keepers of today, to ensure authenticity, relevance and maturation while meeting the urgent and overwhelming felt needs of men today.

“We’ve got to remind men who they are in Jesus Christ.”

Harrison told a gathering in the Dallas-Ft. Worth area Tuesday morning that Promise Keepers 2020 will be simulcast around the U.S. and the globe. Eight foreign countries have already asked to take part. “Imagine the power of a couple million men gathering together one weekend a year worshiping together. Imagine the unity.”

The stadium event is just the start. What happens when men return home? The Digital Age is affording Promise Keepers the chance to do something lacking with the original PK movement: provide an avenue for discipleship after the two days of fellowship is over.

Promise Keepers has created a powerful interactive app that will allow the movement to have a continuing impact in lives. The app will provide discipleship resources for men to go deeper into community and their spiritual journeys together. More specifically — and more exciting — the app will be used to form four-man “fire teams” hopefully in every church in the nation.

“So many have not learned to be a man.”

The term “fire teams” comes from small units of Marines. Like the leathernecks, the PK “fire teams” also can band with four other fire teams to form a squad. Four squads form a platoon. The military-style structure is deliberate. Vance Day says the goal is to establish a Christ-centered “band of brothers” in every church who can encourage and equip one another to function as ambassadors of reconciliation and service. Four men accountable to each other, who share life together. Grow in God together. Men who have each other’s back.

Harrison, a former LAPD cop on the infamously mean streets of South Central/Compton, is particularly excited about one particular aspect of the fire team’s mission. Each fire team will be tasked with mentoring a fatherless boy. Imagine the impact of that effort alone.

“So many have not learned to be a man,” he says.

The keynote speakers for Promise Keepers 2020 include:

Stream publisher and LIFE Outreach founder James Robison spoke at Tuesday’s Promise Keepers breakfast. He shared his enthusiasm about a new move of God … and Promise Keeper’s role in it. “The nature of the enemy is being revealed more clearly than ever. It’s ugly, and it’s dangerous. But God is saying, ‘I am going to reveal Myself, too.’ I believe we are on the verge of the greatest spiritual awakening in history. Not only are we seeing our prayers being answered, but I believe we are going to see Jesus’ prayer in John 17 answered, with Christians being moved into unity with supernatural love for one another.”

Tickets for Promise Keepers 2020 are now available. For more information, visit promisekeepers.org. And keep an eye for more Stream coverage of Promise Keepers 2020. We hope to see you or your husbands and sons just down the road at AT&T Stadium July 31-August 1.