A Review of The Dying Citizen by Victor Davis Hanson 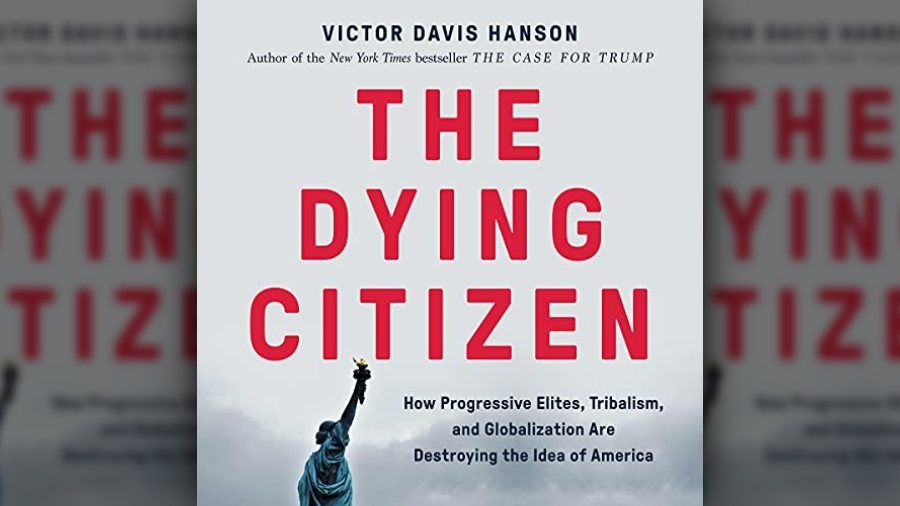 Citizenship is what makes a republic; monarchies can get along without it. What keeps a republic on its legs is good citizenship. — Mark Twain, 1906

With this pithy quote, Dr. Victor Davis Hanson launches into an extended conversation on American citizenship and its decline.

The Roots of Citizenship

Hanson traces the history of citizenship to its ancient roots in Greece. He notes that by today’s standards, these early constitutional governments might look ethnocentric or sexist. But compared to what in the ancient world? The tribal northern European societies? The dynasties of Egypt, Persia, or India? Most of these residents were “tribesmen, serfs, or slaves without individual rights.” And little hope of gaining such rights.

By contrast, as early as the 5th century BC, the rights of citizenship were extending to a growing population in most Greek city-states. Represented democracies, including ours, have never been perfect. But their arc has always been towards greater inclusion and equality under law. In our form of government, legitimacy is derived from the consent of the governed. That makes us self-reflective and open to critique. Institutions like slavery and Jim Crow cannot endure, because they are at odds with our foundational principles, as men like Frederick Douglass and Martin Luther King Jr. observed. Not so in monarchies or dictatorships. Those folks rule from a sense of divine right or innate superiority.

The share of American adults who live in middle-income households has decreased from 61% in 1971 to 51% in 2019. There’s a connection between a shrinking middle class and the decline of citizenship. A strong middle class is the backbone of a representative democracy. The poor are tempted to seek handouts from Uncle Sam. The rich are tempted to use government to create permanent advantages for themselves and their allies. Hanson traces this caution back to Aristotle and Euripides.

Hanson talks about the growing number of Americans who lack financial independence. Fifty-eight percent of Americans have less than $1,000 in the bank. The average credit card debt is over $8,000 per household. It’s over $2,000 per individual. Crippling student loan debt is a reality for millions of Americans, holding them back from home purchases, marriage, and family formation.

In the world of higher education itself we see a growing class of peasants. They’re called adjunct professors. They make bare-bones wages, working at a few colleges to make ends meet. Yet they teach a growing percentage of the course offerings. Recent proposals like universal basic income or blanket student loan forgiveness speak to this dependency between a growing number of Americans and their would-be political leaders.

Hanson uses data from California to illustrate his point. Low inventory and endless regulations on construction have priced millions of Californians out of the housing market, rendering them unable to accrue equity, leaving them subject to rent hikes, living in mobile homes or, worse, homeless. Even as Silicon Valley wealth has aggregated for the lucky few, California has the highest poverty and homeless rates in the nation. While tech money has boomed, 80% of all jobs created in California over the last decade pay less than the medium income.

The rich, in contrast, are more likely to think of themselves as world citizens than as Americans. They tend to favor globalist policies like easy trade with China. Keep profit numbers high and the stockholders happy. Lower prices help consumers, but not necessarily as much as the damage wrought by jobs shipped overseas. Oh, and China happily exploits slave labor from their religious and ethnic minorities. Our response to the pandemic has also benefited large, multinational corporations. They kept shipping product while locally owned businesses stayed closed, some permanently.

I know this is too short of an analysis. Read Hanson’s book to really get the scoop. But it gives you an idea of why a larger middle class would be more stable for society. Another resource is Oren Cass’s book, The Once and Future Worker.

Along with subheads to break up the text of his long chapters, I wish Dr. Hanson had spent a few pages issuing something of a call to action. Maybe it came after the book went to press, but the Virginia governor’s race, and the role of parents frustrated with their school districts, gives us a template.

What we saw from those parents was the exercise of citizenship. Those with the greatest vested interest in their children and their communities stood up. They demanded accountability and transparency from their leaders. They reminded their leaders that legitimacy comes from the consent of the government. When former Gov. McAuliffe said he didn’t believe parents should be telling schools what to teach, he was revealing the classic progressive attitude. The elites know best. The peasants just need to go along with what they’re told — they’re too stupid to understand these matters and make informed decisions for themselves. The statement was political suicide because an informed citizenry is foundational to the idea of America.

What else can we do? Encourage good people to run for School Board positions and City Council races. You don’t need a huge PAC to win these kinds of races.

We must promote civics education for our children. We can’t preserve the idea of America without the next generation knowing the key aspects of our history, and not just from a distorted, woke lens. Hillsdale College offers free online courses, including one covering the textbook Land of Hope, an honest assessment of U.S. history, warts and all, and another with Dr. Hanson on American Citizenship and Its Decline.

Finally, pray. Under God, there is a healthy love of country that is 1,000 miles from the Christian nationalism widely decried in recent days, and under which label many good people have been unjustly castigated. We seek the welfare of our cities, our states, and our country, for in its welfare we will find our welfare (Jeremiah 29:7). It’s our privilege as citizens, and our duty, to advance a just and virtuous society, for the benefit of everyone, Christians and non-Christians alike.