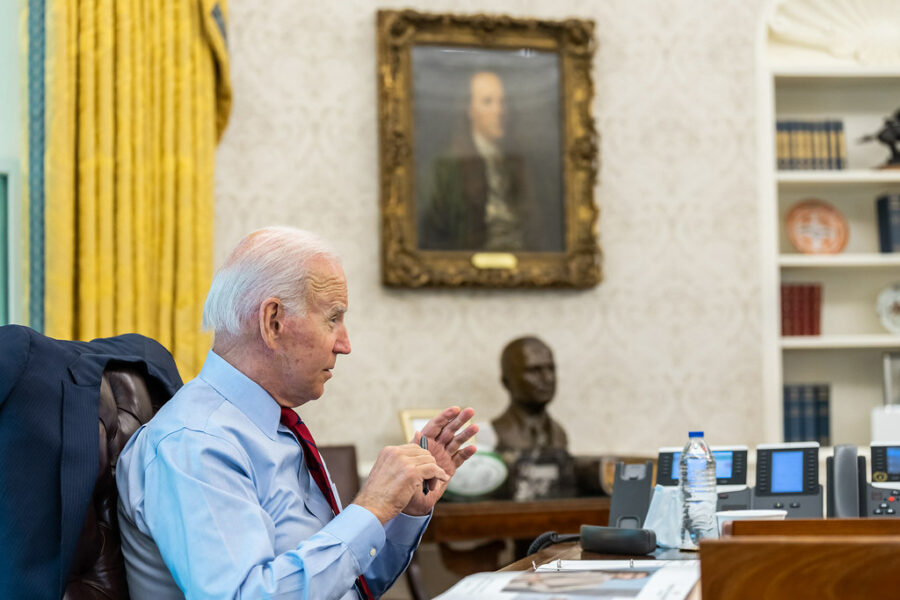 The day after the Mar-a-Lago raid, I wrote out a prediction.

I predict we are going to find Monday’s raid has nothing to do with the bona fide document geeks at the National Archives working on the matter. This came out of their leadership. In fact, this smells exactly like the situation last year with the National School Board Association writing a letter to the DOJ requesting protesting parents be declared domestic terrorists. Turned out the White House recruited the NSBA to write the letter, worked on the letter … and lo and behold, days later the same Merrick Garland who signed off on this abominable raid is launching a counter-terrorism operation against American parents, citing the letter.

When Republicans take over the House, one of the places they have to look is communication between the White House and National Archives. I’m betting this raid was ginned up just like the “domestic terrorists” investigation. The politicos at National Archives were enlisted to “pressure” the DOJ.

I would have won the bet. (Though given recent history this prediction was a bit like predicting the 1st pick in the NBA draft will be tall.) Despite swearing they had no involvement, communications uncovered by Just the News’ John Solomon prove beyond all shadow of a doubt the Biden White House “facilitated DOJ’s criminal probe against Trump.”

Solomon reports the White House “worked directly” with DOJ and the National Archives in ginning up the probe as early as April. A key element of this effort to “get” Trump was Biden unilaterally waiving Trump’s claims of executive privilege, clearing the way for DOJ to get a grand jury to issue subpoena, leading straight to the raid.

The Acting National Archivist Debra Steidel Wall wrote Trump’s lawyers in May detailing the White House’s involvement, including how the White House gave her the authority to blow off Trump’s claims of executive privilege:

This, Solomon writes, eliminated “one of the legal defenses Trump might use to fight the FBI over access to the documents.” Within weeks, the DOJ had seated a grand jury for a criminal charge against Trump. Despite Trump having cooperated. Despite having had the full authority to declassify anything he wanted. Despite having the documents secured with an additional lock at DOJ’s request in a storeroom guarded by the Secret Service.

Again, the speed with which DOJ moved echoes what happened with the National School Board Association letter. The White House works with NSBA to craft a letter, asking DOJ to investigate protesting parents as “domestic terrorists,” and days later the DOJ acts. Here, as the communications uncovered by Solomon show, the White House, DOJ and Archives were working in tandem. Biden does his part by waiving privilege, and the DOJ springs into action against Biden’s political opposition.

The current president should not be able to waive the executive privilege of a predecessor, without the consent of the former president. Otherwise it (privilege) means nothing. What president will ever discuss anything in private if he knows the man who beat him can and will disclose it?

This secret collusion between the Biden White House and the DOJ to entrap Trump in a criminal investigation is yet another unprecedented move to undermine the rights of a former President and ‘get Trump,’ no matter the cost. And they keep claiming Trump was the one who “shattered the norms of decency!

Trump Responds to News Biden Was Involved From the Start

The White House stated strongly that they were NOT INVOLVED, and knew absolutely nothing about, the political Witch Hunt going on with me, & that they didn’t know anything at all about the Break-In of Mar-a-Lago. This was strongly reiterated again & again. WRONG! Remember, these are the people who spied on my campaign, denied it, & got caught. Through the great reporting of John Solomon (Fake Pulitzer Prize?), documents reveal they knew everything, in fact led the charge – a political NO, NO!

By Democrat Standards, How is This Not Impeachable?

Three years ago, in the middle of a congratulatory phone call to then-newly elected Ukraine President Zelensky, President Trump casually asked about the Bidens’ illicit activities in Ukraine. Hunter was already under FBI investigation for his assorted international shenanigans, so it wasn’t exactly a request out of the blue. And Biden’s public boast about blackmailing Zelensky’s predecessor over the prosecutor pursuing Burisma had gone viral.

For asking about a “potential political rival” in a routine phone call, House Democrats voted to impeach Trump for abuse of power.

Now here’s Biden tossing away the concept of executive privilege, teaming up with the DOJ and National Archives (of all places) to facilitate a criminal investigation of his clear political rival. And feigning ignorance as his FBI raids his rival’s home with a likely unconstitutional general warrant.

Let’s see: Casual question to foreign leader vs. conspiring with DOJ and a once independent government agency to criminally persecute your rival. Seems open and shut.

This is Nothing New for Biden

Finding creative ways to sabotage political rivals is nothing new for Joe Biden. As Trump was set to take office, it was then-Vice President Biden who suggested using the Logan Act to nail the incoming National Security Advisor Michael Flynn. The Logan Act had not been used to successfully prosecute anybody in the history of the United States. This conspiracy began in the infamous January 5, 2017 Oval Office meeting where Obama, Biden, Comey, Lynch, Clapper, Brennan and Rice colluded to use the FBIs Trump-Russia Collusion investigation … which all knew by this point was a crock … as a way to sabotage the incoming Trump administration.

How is Biden getting away with using the FBI to criminally pursue Trump? Because he got away with it in 2017.