“Behind every great fortune lies a great crime,” wrote French novelist Honore de Balzac. That’s not necessarily true, at least in a free market system. But here’s something you can count on: Every tyrannical government sits at the top of a vast pyramid of crimes.

First of all, the abuses of God-given human liberty, which are themselves crimes against almighty God and one’s neighbor. Every time someone’s freedom gets unjustly restricted, that’s a crime. Since the weakest suffer the worst, those are crimes against “the least among us,” whom Christ demanded that we look after first. That’s the criterion on which He promised to judge us when our lives end.

But let’s go further. The link between tyranny and crime is much deeper and richer, and directly relevant to life in 2021 America. I’m reading a truly great book on political philosophy, The Character of Nations. It’s by the late Angelo Codevilla, who wrote once for The Stream.

Politics as a Mode of Crime

The book is a basic manual, akin to Aristotle’s Politics or The Prince or The Wealth of Nations, in that it looks for the fundamental principles that explain political systems. It explains these complex realities in clear, persuasive prose full of deep insight based on decades of careful study. Get it. Read it. Cite it, as I am doing, to seem much wiser than you are.

In The Character of Nations, Codevilla explains that the political system called Tyranny embraces crime as its operating system. Those who rise to power do so in order to profit and dominate. They recruit as their confederates those who want in on the scam. They appeal to men’s lowest instincts to find support among those who hope to profit, too, by oppressing and robbing their neighbors. This describes, on a small scale, how a Mafia crime family might take over a Southern Italian village. 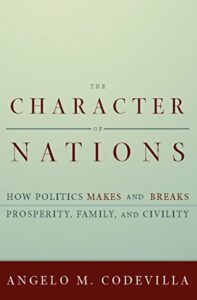 Codevilla also lays out how vast, illiberal systems such as the Soviet Union, and today’s Red China, work. Whatever ideology serves as the pretext for a tyranny is strictly beside the point. There were fewer believing Marxists in Russia in 1990 than there were in the Ivy League. There are probably none in China now.

Now tyrannies can rise to power by riding ideologies. Demagogues and oligarchs disguise their corrupt intentions by waving great big flags and repeating soothing words. We must counter the bad arguments of such ideologies in the hope of peeling off supporters and frustrating the tyrants. But we should never forget the true nature of what we’re dealing with: Would-be thugs and thieves who wish to bully and pillage us. And the moment they think their power is safe, that’s exactly what they’ll start doing.

This Augustinian intro was needful, I think, to help the reader process the following story. When Attorney General Merrick Garland announced that an association of local school boards asked for federal protection against unruly parents at PTA meetings, he cited “extremism” and “terrorism.” And we were all puzzled. Is the Biden administration so committed to Marxism in Blackface (Critical Race Theory), that it will dub even black parents who question it as potential terrorists? On the face of it, it seemed so absurd that only David French was fooled. This seemed like a puzzling overreach, a “jump the shark” moment on the part of leftist education bullies.

Always Look for the Crime

So the odds were good there was something more behind it. An angle, if you will. Some power or money grab must explain why a flailing administration would pick this battle. And sure enough we found one: Merrick Garland’s son-in-law makes millions selling Critical Race Theory materials to guilt-addled white suburbanites at gullible public schools. But it doesn’t end there. Things usually don’t. In any government where Tyranny is the modus operandi, multiple layers of crime usually lie behind its actions, with crooks at multiple levels tapping in and benefiting. And in this case, we found a treasure trove.

Now, and only now, we come to the subject of our headline. Kudos to The Daily Wire for breaking the story. Too bad it’s behind a paywall. So I’ll quote The Daily Mail, which did a report accessible to all.

An Unruly Plumber Whose Daughter Got Assaulted

How did it suddenly become a national crisis that parents were getting angry at school board meetings? What incident provoked the top law enforcement officer of the United States of America to threaten police state tactics here? Now we know. It all began with precisely the kind of person who suffers under a tyranny: an ordinary citizen facing corrupt public employees. As the Daily Mail reports it:

A Virginia father who went viral after being dragged out of a Loudoun County school board meeting and arrested for protesting its proposed transgender policies has now revealed he was trying to tell the room that his daughter had been raped by a boy at school in the girls’ bathroom.

Scott Smith was photographed on June 22 being dragged out of the heated meeting with his torso exposed in Leesburg, Virginia. The 48-year-old plumber was ridiculed on social media afterwards and was painted by the left to be a deranged, right-wing bigot.

But in an interview with The Daily Wire that was published on Monday, he explains that he was trying to stick up for his daughter, who was attacked at Stone Bridge High School on May 28 by a boy ‘wearing a skirt.’

Smith says the boy took advantage of the school’s trans policies to get into the girls’ bathrooms and assault her.

Two months after the incident, the boy – who has not been named because he is a juvenile – was arrested for forced sodomy.

And in October, he was arrested again on different charges for allegedly assaulting a different girl, at a different school. He is now in a juvenile detention center.

But Smith says Loudoun County schools went out of their way to protect the child – ‘a sexual predator’. The school still has not commented.

‘It has been so hard to keep my mouth shut and wait this out. It has been the most powerless thing I’ve ever been through,’ he said.

Always Assume Someone’s Getting Rich Off of It

Go read the rest of the story, to see how school officials bobbed and weaved, lied and obfuscated for weeks as Smith sought justice and protection for his daughter. And how Smith was dragged out of the school board meeting before he could tell his story — you know the way dissidents get hauled off by the secret police in dictatorial countries, to keep their grievances quiet.

But don’t get lost in the details. The U.S. federal government intervened to help school officials and a school board that had botched the handling of a sex offense. They did so in defense of their own political partisans, of course. But also to try to silence a story that might undermine their ideology, the fig leaf that covers their crimes.

That fig leaf, in this case, is Transgender ideology. Remember that California just made it legal for the adults at a school to recruit school children and convince them that they are really “transgender,” without their parents’ knowledge. Then the school’s counselors can start brainwashing and giving sex hormones to those children, again without telling their parents. Who profits from that? The well-paid counselors and the Big Pharma companies that make the drugs, of course.

The point of my bringing all this sordid material up? Remember that our ideological enemies mostly aren’t addled idealists, in the grip of false ideas. At bottom, they’re tyrants, which is just another word for “bullies” and “thieves.”

“I Serve No Man.” Thank God for the Courage of Truth-Telling, Dissident Journalists