A Pale Blue Dot? I Think Not 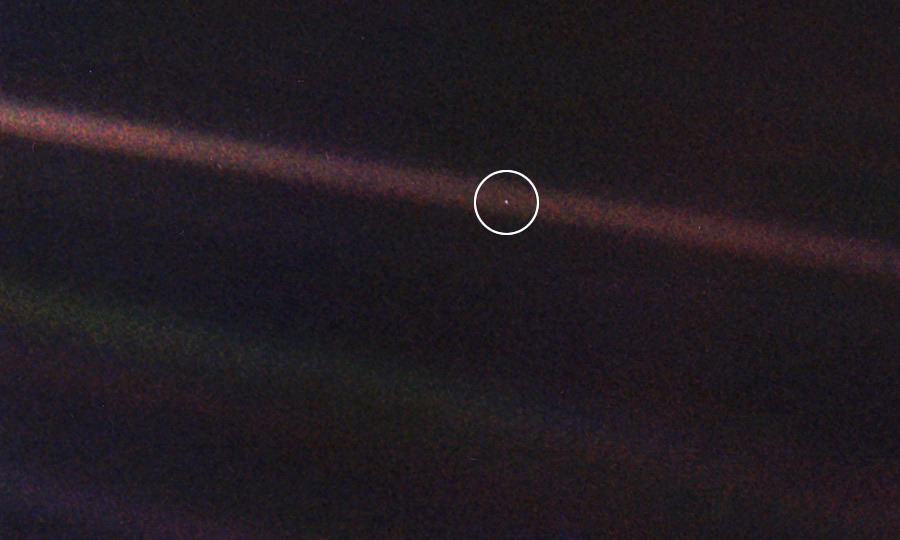 When I was growing up in the late 1970s, we were all pretty sure that the universe was brimming with intelligent life, somewhere. Advanced civilizations lay just beyond our reach, made up of organisms who might be based not on carbon but on silicon or aluminum. They might inhabit gas giants akin to our Jupiter, or have found a way to subsist on tiny, barren rocks a lot like Pluto. They might communicate via telepathy, or magnetism, or blasts of ultraviolet light.

We’d been watching too much Star Trek, of course. And spending too much time reading magazines like Omni, which combined skilled science fiction with teasing hints that alien life was just within our reach. Maybe it even had contacted us, only the government covered it up.

Our Search for Life Beyond Earth

More soberly, serious scientists such as Carl Sagan (of TV’s Cosmos) were enthusiastic supporters of the Search for Extra-Terrestrial Intelligence (SETI), which included a NASA space probe that featured greetings from earth in many languages, along with — I’ll never forget — a recording of Beethoven’s Ninth. All of it played on a gold record embossed with Leonardo da Vinci’s magnificent sketch of man.

I still get chills remembering all that. But optimism has cooled about discovering such intelligence. As research into exo-planets continues, the sheer number of eye-of-a-needle constraints outside of which life is impossible just keeps on multiplying. And scientists are informing us: No, there almost certainly can’t be silicon-based life. No, life can’t emerge on permafrost worlds continually sprayed with gamma rays. Or in gas-clouds that orbit black holes. No, no, and no.

Suddenly the sheer number of so-called “inhabitable” worlds has plummeted. We begin to see, whether we like it or not, that earth is a “privileged planet,” an extremely rare life-friendly platform floating in space. It’s at exactly the right distance from precisely the right kind of star, with just the right type of moon, and precisely the needed magnetic field, tectonic plates, atmosphere, oceans, tides … the list goes on and on. For more, see Eric Metaxas’ new book Is Atheism Dead?, or Jay Richards’s The Privileged Planet.

Suddenly we question the old atheist wheeze that earth is a tiny speck of dust that circles a mediocre star, in a backwater suburb of a medium size galaxy, one of billions of interchangeable galaxies just like it. A “pale blue dot,” in Carl Sagan’s words. No, it isn’t. Quite obviously it isn’t. Instead, it’s the only place we know of, in the vast ice and fire of almost infinite space, where life has proven possible. Where information exists. Where minds can contemplate it.

Come with Me to the IMAX

Imagine you’re sitting in a theater. Make it one of those cool “laser” theaters from the late 1980s they built at planetariums, which paid for themselves on weekends by showing Pink Floyd concert films. You and the audience sit in total darkness and silence staring at the 300-foot IMAX screen. There is nothing.

And suddenly, out of all the black, dead pixels up there, just a few start blazing with light. A small circle appears, exploding with movement, color, then sound. It stands out in utter contrast to the stark darkness and silence of all the vast space around it.

From your perspective in the audience, would you think that vivid orb was dull, ordinary, run-of-the-mill? No, it would have your full attention. You would watch as it whirled on the screen, wonder what its patterns meant, try to see if there was a pattern to its psychedelic changes of color and trajectory.

You’d wonder what the spinning, vibrant, whirling dot was supposed to mean. You’d try to attribute significance to its movement along with the music. You might respond emotionally to the patterns, sound, and shades. The one thing you wouldn’t think would be: “Oh, it’s just some ordinary bunch of pixels, exactly like all the others — except, you know, for the colors, light, music, and movement.”

The Spotlight Shines on Us

That is exactly how we ought to respond to the vastness and apparent deadness of the rest of the universe, compared with Earth. We should see it as a vast theatrical stage, empty except for a spotlight that shines on a single couple, who dance a slow and risky balletic duo with each other.

That couple is God and man, and we play the female part. He leads, we follow. He throws us into the air, and we gasp as we hope that He catches us. The music, the lights, the darkness and the silence? They’re all for our benefit. And He has carefully composed and choreographed it all.