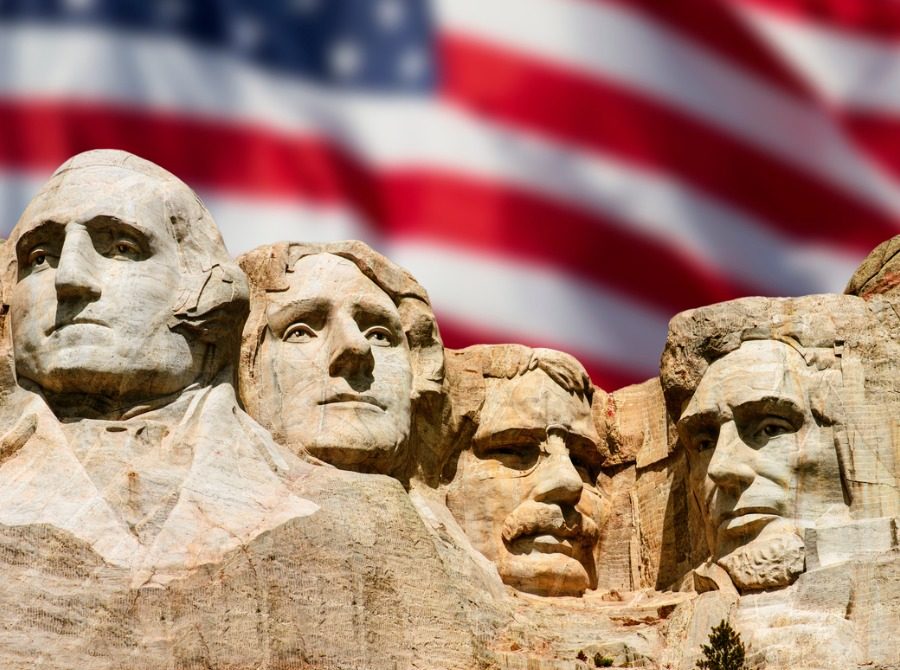 A couple weeks ago, we used the below picture on an article. It was a dramatic image we had created when Antifa started its violent run in 2015, a prophetic look where they were headed. When we ran it again, we were hit on Facebook by those calling us “fake news.” 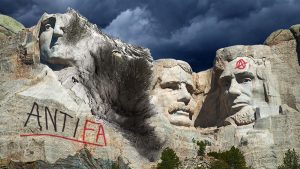 Why Teddy? Because of its “associations with colonialism” and because it “communicates a racial hierarchy.” (He’s on a horse and flanked by a Native American and an African on foot.) Except that statue’s at the museum to celebrate Roosevelt as a “devoted naturalist and author on works of natural history.”

Why Lincoln? Because freeing the slaves and taking a bullet to the head for his trouble isn’t enough for these people.

What’s it say when the four faces of Mount Rushmore are targeted for destruction?

It says when anyone tells you this Taliban-esque assault on statues and monuments is about racism, or slavery, they are lying. It is about America itself. It’s America they want broken and burned.

Confederate Statues … and the Man Who Defeated the Confederates.

Trump was mocked when he suggested Confederate statues were just the start. Even now we hear “The Confederate statues have to come down!” Meanwhile, these same mobs tear down the statue of Ulysses S. Grant, the general who defeated the Confederacy. Who crushed the KKK. Who desegregated the federal government (until Democrat hero Woodrow Wilson re-segregated it.) “Oh, but Grant was a slave owner!” Grant was an abolitionist “gifted” a slave by his slave-owning father-in-law. Grant quickly freed the man.

If half of what CNN and its fellow propagandists say is true about the “peaceful protesters” of Antifa and friends, U.S. Grant would be held up as a hero, not torn down. But he’s an American general. An American hero. And so down he goes.

Personally, I find it poetic to have pigeons pooping on the Confederate generals Grant defeated. But if a city council, after serious consideration and contemplation, rather than reflexive reaction to the mob, wants to move a statue from a place of honor, fine.

What I do question though is, “Why now?” Just five years ago, we commemorated the 150th anniversary of the end of the Civil War. Yet the anniversary passed with barely a peep. The anniversary of the end of slavery passed with barely a peep. Surely that would have been the perfect opportunity to box up the Confederate statues. Tell the former Confederate states, “You’ve had 150 years to mourn your ‘Lost Cause.’ Time to suck it up.” But alas, 2015 wasn’t an election year.

“But Al, this is about systemic racism! Not the election!” Really?

Black Lives Matter co-founder Patrisse Cullors, who described herself and her co-founders as “trained Marxists,” spilled the beans on CNN Friday. “Trump needs to be out of office. He is not fit for office. And so what we are going to push for is a move to get Trump out.” Instead, BLM will be pushing for Joe Biden, a guy both Kamala Harris and Cory Booker implied was a racist. The guy whose crime bill sent countless young black men to prison. A situation Trump worked to rectify.

Perhaps Cullors and comrades should have spent less time studying Marx and Lenin and more time studying logic. After all, we’re talking about systemic racism, going back to 1619 when slaves first arrived in what wouldn’t even be the United States for over a century and a half, right? So what in the world would one real estate guy from Queens, whose family arrived from Ireland half a century after the last slave was freed, have to do with that system? Or for that matter, what could one politician from Delaware with a half century of mangling the matter do to fix it?

His boss sure didn’t. Barack Obama was elected to two terms. In an America with racism so ingrained, it put into the Oval Office a black guy with less executive experience than the night manager at a 7-11. Did racism diminish? Under Obama’s watch, did we move closer to Dr. King’s dream or farther away?

Why did the scene at Lafayette Square last night look more like the revolutions Obama helped fund around the world than the elevation King prayed for at the Lincoln Memorial?

Does Antifa and BLM, Inc., and their progressive enablers even care about the vision and example of MLK?  The 1,500 buildings damaged in Minneapolis would suggest no. The 150 officers injured in Washington, DC, would suggest no. The citizens beaten and harassed coast to coast would say no. The segregated areas of CHOP shout a loud “No!”

This Prager U video demonstrates the contrast:

During the Montgomery Bus Boycott which helped propel Civil Rights and MLK into the national spotlight, Dr. King rewrote the old spiritual, “Give Me That Old Time Religion.”

We are moving on to vict’ry (3X)
With hope and dignity.
We shall all stand together (3X)
Till everyone is free.

We know love is the watchword (3X)
For peace and liberty.
Black and white, all are brothers (3X)
To live in harmony.

We are moving on to vict’ry (3X)
With hope and dignity.

Does anything you see with Antifa or Black Lives Matter, Inc. suggest Hope? Or Dignity? Peace? Liberty? Harmony? Love?

Etch this in stone. The memorials to Rev. Martin Luther King will soon be on the target list. For he is an American hero.

Yet, for those who love this country, we stand with Rev. King, U.S. Grant and the Founders. And Hope. Dignity. Peace. Liberty. Harmony. Love. And the greatest of these is love.