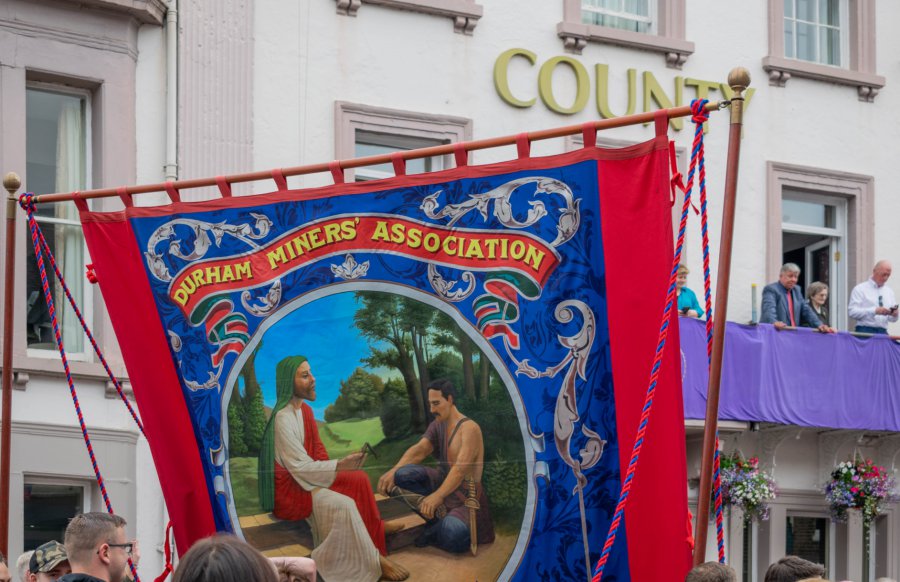 A scene from the 2019 Durham Miner's Gala, associated with the miners' unions and the Labour Party that traditionally represented them. Local branches march with their banners and brass bands.

Socialists everywhere furrowed their brows. This looked bad for the cause. It looked bad for the future. In the English election three weeks ago, the Tories thrashed Labour. The country chose the conservatives over the socialists, and by a lot.

Now the world’s socialists must try to figure out what went wrong. It’s worth listening in. It’s a bit like standing in the back of the Patriots’ locker room after they lost to the Titans. You’d learn a lot from hearing Bill Belichick talk about losing.

The Tories won so big, they can do what they want for the next five years. Labour can only protest. Worse for Labour, the party lost a lot of seats from its famous “red wall,” working class districts in the industrial north of England that had been solidly Labour for decades. Imagine Chicago, New York City, and Boston voting Republican. One had been a Labour seat since 1922. Another that had been Labour since 1932 elected a Tory with twice as many votes as the Labour candidate.

This was horrible news for socialists around the world. The Labour party had run under its most socialist platform in decades. And the country said no. Its own members said no.

This was horrible news for socialists around the world. The party had run under its most socialist platform in decades. And in Jeremy Corbyn, it had the most leftist leader since the early nineties. “Corbynism” drew lots of young people into the party. It revitalized the party’s left wing.

Some Labour voters switched to support Brexit, the Tory’s plan to leave the European Union. But was that all? Why didn’t the socialist promise hold them? Socialists everywhere furrowed their brows. What’s a socialist to think? What can they do now?

From what I know, I think that describes Labour-turned-Tory voters. It should warn our Democrats, but also in another way our Republicans.

But I want to point to another insight and an implication that I think everyone needs to hear. Conservatives as well as liberals. The insight comes from a forum in the American socialist journal Dissent. The forum takes up “The battle to frame the defeat.”

An English college professor named Keith Kahn-Harris argues that the voters just felt exhausted. The election “took place after months and years of relentless political turmoil,” he writes. It was “dominated by endemic uncertainty. It was unclear when any of this turbulence would come to an end.”

Whatever political views an English voter held, Tory or Labour or anything else, “the last few years have been exhausting. This sense of exhaustion isn’t something many pundits have highlighted, but it is the most striking commonality I have found in the many conversations I have had since the election.”

Any American involved in politics can sympathize. It doesn’t stop. The other side always gets up to no good. Your own guys keep failing. Sometimes they betray you. Every day seems to bring a new crisis. Political life presents one impending apocalypse after another, whatever side you take. Look at this week’s crisis, following the killing of General Soleimani. One side thinks Trump will blow up the world. The other side thinks the Democrats will keep him from saving America. Both freak out.

As Kahn-Harris says, that exhausts you. You can’t keep up the pace. He thought the Tories won because they promised people a break from all this. Labour “proved so out of tune with many voters [because] this prospect of there being no end to the work of politics could never compete with the desire for peace and quiet. We have to take exhaustion seriously as a political variable. Right now, those offering the illusory hope of escape from the work of politics are winning.”

That’s the insight. What’s the conclusion everyone should hear? That politics is work, practical person-to-person work, and never-ending work, and it will tire you out. But it’s the work politics demands. You can’t escape it if you want to do what in our system needs doing.

Kahn-Harris explains: “Going out and knocking on doors is action driven by hope — hope that you can change people’s minds, hope that the future can be better. It’s not a passive hope, but a hope that can only be enacted through continuous work.”

Christians know that politics doesn’t give us what we most need. It’s not ultimate or final. God comes first. But political action is one necessary work of making the best of the world He has given us. It is one way we love our neighbors as ourselves. In it we give to Caesar what belongs to him and give to God what belongs to Him. Some of us are called to do more than others, but pretty much all of us must do more than we want to.

A Burden We Don’t Want

How we feel about the work doesn’t matter much. In a deeply Christian passage from The Lord of the Rings, Frodo complains that he must carry a burden he never wanted to carry. None of us would. “I wish the Ring had never come to me. I wish none of this had happened,” he says to his friend and guide Gandalf. Gandalf replies: “So do all who live to see such times, but that is not for them to decide. All we have to decide is what to do with the time that is given to us.”

And for most of us, that includes the exhausting, never-ending, always at best partly successful work of politics.