A Hero Lost: General-Turned-Diplomat Colin Powell Passes Away at Age 84 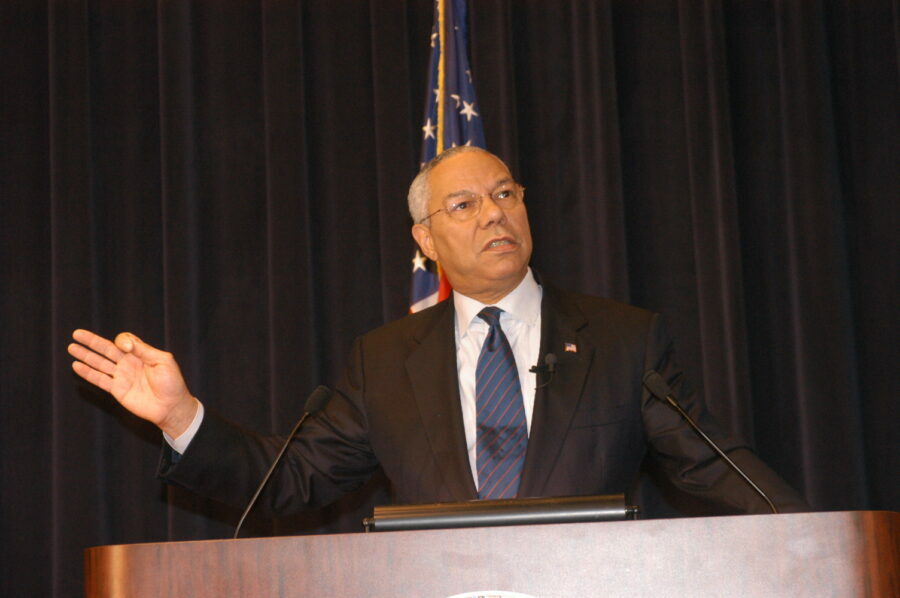 General Colin Powell, who served presidents of both parties, leading in both war and peace, has died “due to complications from COVID-19.” He was 84. Powell is survived by wife Alma Vivian Powell and their three children.

The Powell family announced the death of the war hero-turned-diplomat on Facebook.

“We want to thank the medical staff at Walter Reed National Medical Center for their caring treatment. We have lost a remarkable and loving husband, father, grandfather and a great American.”

The family noted that Gen. Powell was “fully vaccinated.” According to a longtime aide, Powell had been undergoing treatment for multiple meyloma, a blood cancer. As Associated Press reports, the condition lowers immunity and studies show those cancer patients receive less benefit from vaccines.

Flags at the White House have been lowered to half-staff.

Powell rose through the ranks to become first black Secretary of State under George W. Bush. He’d previously served as Chairman of the Joint Chiefs of Staff under George H. W. Bush during the Gulf War. Powell also became the nation’s first black National Security Adviser to Ronald Reagan, and had served as a junior officer in the Carter White House as well. 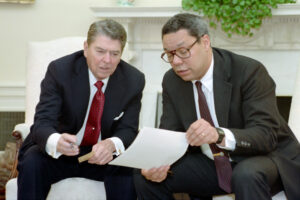 For years Powell was urged to run for president himself by both the Democrats and Republicans.  Though long considered a Republican, Powell was vocal in his support for Barack Obama, and had been voting Democrat ever since. After January 6, Powell declared he no longer considered himself a Republican.

In mourning “this great public servant,” former President George W. Bush noted that Powell was “such a favorite of Presidents he earned the Presidential Medal of Freedom twice.”

Added Bush, “He was highly respected at home and abroad. And most important, Colin was a family man and a friend.”

Rising Up from Harlem

Powell was born to Jamaican parents in Harlem, New York, and grew up in the South Bronx. He graduated from City College of New York and joined the military through R.O.T.C. He then completed two decorated combat tours with the Army in Vietnam before being stationed in Washington, D.C., and beginning his historic climb into American leadership.

Powell came to national prominence during the first Gulf War, briefing the nation when the U.S. forces tossed Iraq’s army out of Kuwait, and in shocking fashion raced to Baghdad and Saddam Hussein’s door step.

As Chairman of the Joint Chiefs Powell had a military philosophy that led America to battle success, only to be ignored by the Obama and Biden Administrations. “The commander in the field is always right and the rear echelon is always wrong, unless proved otherwise.”

The General understood that military might is only part of what makes America strong.

“Indeed,” he said, “we’re strongest when the face of America isn’t only a soldier carrying a gun but a diplomat negotiating peace, a Peace Corp volunteer bringing clean water to a village, or a relief worker stepping off a cargo plane as floodwaters rise.”

Thank you for your service and inspiration, General Colin Powell.