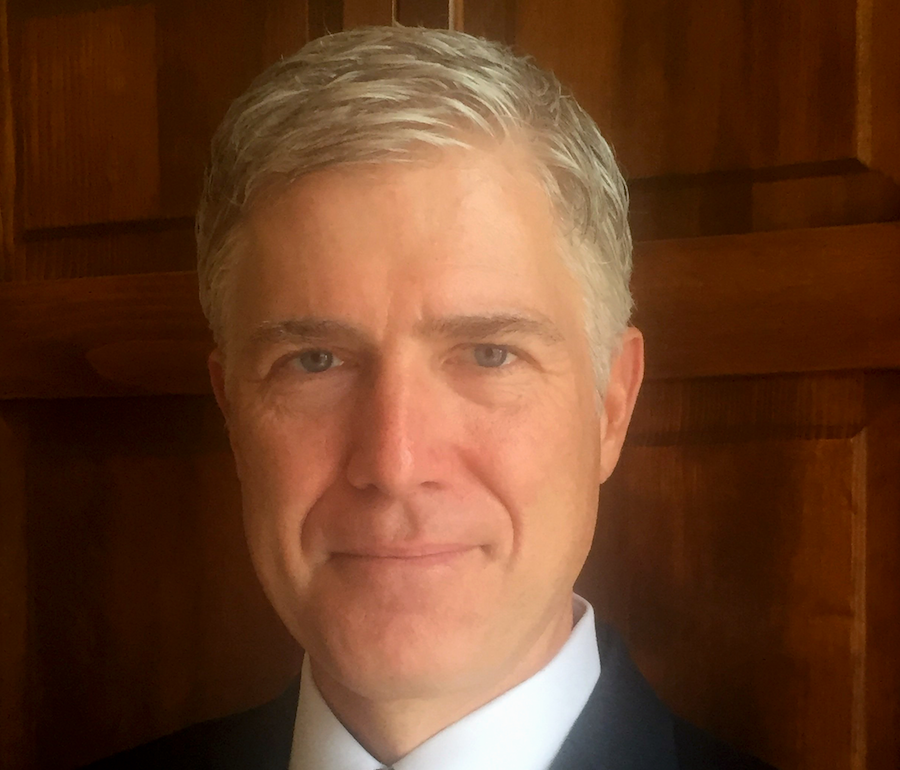 Judge Neil Gorsuch has been nominated to fill Antonin Scalia’s seat on the Supreme Court. Here are a few facts about his religious history and commitments, including positions important to religious conservatives.

1) Neil Gorsuch attended a Catholic school, the exclusive Georgetown Preparatory School, while his mother Anne served as head of the EPA under President Reagan. The school is run by the Jesuit order. He was student body president his senior year and graduated in 1985. The school makes a point of noting that it was founded the same year as the Supreme Court was established.

He studied at Oxford under the Catholic philosopher John Finnis. Finnis is one of the world’s leading Natural Law thinkers. One of Finnis’s other students, Princeton professor Robert P. George, wrote on his Facebook page that “Judge Gorsuch, whom I know well, is a faithful constitutionalist and extraordinarily well-qualified. President Trump could not have done better. Kudos to him.” Before the nomination, George had written, “He would be a superb Supreme Court justice. He is intellectually extremely gifted and is deeply committed to the (actual) Constitution and the rule of law. He will not manufacture ‘rights’ or read things into the Constitution that aren’t there or read things out of the Constitution that are.”

2) He’ll be the only Protestant on the court. He now attends St. John’s Episcopal Church in Boulder, Colorado, where his daughters served as acolytes. The church describes itself as “an inclusive, Christ-centered community reaching out to all who are seeking a deeper spirituality and relationship with God and one another.” It has a woman pastor.

3) He opposes the legalization of euthanasia, as he wrote in his book The Future of Assisted Suicide and Euthanasia. Princeton University Press published the book in 2009. Two of the nation’s leading Catholic bioethicists, Princeton’s Robert P. George and Georgetown’s John Keown, praised it.

However, as the Southern Baptist’s Ethics and Religious Liberty Commission noted, “during his confirmation hearing [for the Tenth Circuit] he said he would follow the law rather than personal convictions, and that in his writings he has largely defended existing precedent in these areas.” As one constitutional scholar described Gorsuch’s views:

[He] believes that “any State’s decision to legalize assisted suicide would likely bring with it both benefits and some attendant costs, and, accordingly, the legalization question presents a difficult moral and legal choice.” … In his book, Gorsuch elaborates on these ideas, proposing as a guiding principle the intrinsic value of human life and arguing that “to act intentionally against life is to suggest that its value rests only on its transient instrumental usefulness for other ends.” He suggests a standard that would leave room for patient autonomy while not allowing intentional killing.

4) Gorsuch is taken to be an opponent of abortion, though he’s never written a court decision on the matter. He wrote in his book that “All human beings are intrinsically valuable and the intentional taking of human life by private persons is always wrong.” Also, “To act intentionally against life is to suggest that its value rests only on its transient instrumental usefulness for other ends.” And also:

It is simply not acceptable when we are deciding who is and is not treated as fully human…. It is incompatible with the promise of equal justice under law that any of us should feel at liberty to sit in judgement to decide who is and who is not entitled to the benefits of that promise.

In a footnote to the book, he argued that “Abortion would be ruled out by the inviolability-of-life principle I intend to set forth.” He noted that this depended on another belief. It would be true “if, and only if, a fetus is considered a human life. The Supreme Court in Roe v. Wade, however, unequivocally held that a fetus is not a ‘person’ for purposes of constitutional law.” Observers believe he would find that the fetus is a person.

His one judicial encounter with the issue came in Planned Parenthood of Utah v. Herbert. “Last October,” writes constitutional expert Ed Whelan of the Ethics and Public Policy Center, Gorsuch “dissented strenuously” when the court left standing a order keeping funds going to Planned Parenthood and over-rode the governor’s directive. “Gorsuch faulted the panel for failing to accord the appropriate degree of deference to the district court’s factual findings and for making its own bizarre inferences about the governor’s reasons for acting.”

A negative testimony to his position is NARAL’s reaction. The formerly named National Abortion Rights Action League tweeted, “We will fight hard, we will fight back, and we will #RESIST Neil Gorsuch & Trump’s extreme #antichoice agenda! #StopGorsuch”.

Gorsuch has “an especially strong record” on this subject, writes Whelan. In 2013, Gorsuch supported Hobby Lobby against the Obamacare mandate to provide conception, a decision upheld by the Supreme Court. Two years later, he supported the Little Sisters of the Poor, an organization of Catholic nuns, against similar requirements.

He “has also written or joined opinions — again, largely vindicated by the Supreme Court — that have criticized doctrines that limit religious expression in public spaces,” writes another legal scholar, Eric Citron, on the SCOTUSblog.

The common thread in these cases is one that matters very deeply to conservatives: a sense that the government can permit public displays of religion – and can accommodate deeply held religious views – without either violating the religion clauses of the Constitution or destroying the effectiveness of government programs that occasionally run into religious objections. In his 2009 concurrence in Pleasant Grove City, Utah v. Summum, Scalia articulated very similar views.

6) Gorsuch is intellectually independent. He’s willing “to rethink constitutional principles from the ground up,” says Jeffrey Rosen of the National Constitution Center, quoted by Politico. “Like Justice Scalia, he sometimes reaches results that favor liberals when he thinks the history or text of the Constitution or the law require it, especially in areas like criminal law or the rights of religious minorities, but unlike Scalia he’s less willing to defer to regulations and might be more willing to second-guess Trump’s regulatory decision.”

7) He loves his wife Louise and two daughters, Emma and Belinda. He dedicated his book to them with the words “Finally, and borrowing in part from P.G. Wodehouse, I thank my wife, Louise, and my daughters, Emma and Belinda, without whose constant love and attention this book would’ve been finished in half the time — but without whom life wouldn’t been half as fully lived.”

Lysistrata 2018? Sleazy Men Will Be All Too Happy to Oblige