A message for the shepherds of the Church. 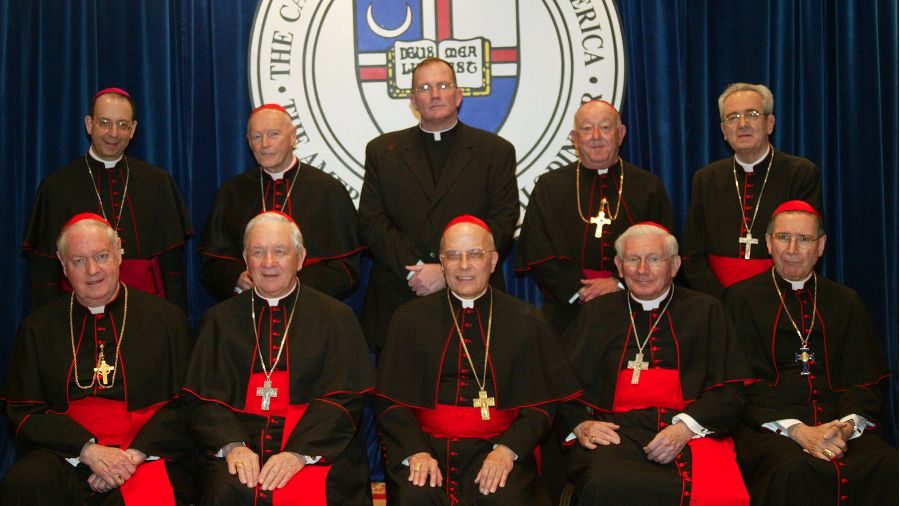 In this Jan. 28, 2005, file photo, the seven American Catholic Cardinals pose with the Archbishop of Miami and the president of the Catholic University of America before a dinner. Cardinal Theodore McCarrick is second to the top left.

I wanted a clean house. I didn’t think that was an unreasonable expectation.

We’d just purchased a home of our own, our first home that wasn’t government quarters or a rental. Here our family would write a new chapter and paint the walls any color but white. We could live and grow and settle in and exhale.

I saw the house in person for the very first time only an hour before we closed. I walked into my soon-to-be-new-home with nerves jumping with excitement and something resembling nausea.

After a few minutes, my nervous nausea turned to something else. Disappointment. Disgust. Anger.

The sellers had left the house a mess. Totally uncleaned. I mean, these people did not bother to so much as get a broom and sweep the floors. I looked inside the refrigerator and wanted to call the guys in Hazmat suits. I looked in the bathrooms and saw soiled toilets. Figure out what I mean by “soiled.”

Every counter top, every cabinet, every drawer, every baseboard, every window and window sill, every floor, every inch of every room was dirty.

Whatever Happened to Basic Courtesy?

In 19 years of marriage, I’ve moved with my family about 12 times. We have never, ever left a house dirty for another family to have to clean. First of all, you just can’t get away with that in the military. You can’t clear post and go to your next assignment if you don’t clear Housing, and you can’t clear Housing if your house isn’t clean. In some places, that even meant scrubbing the trash cans inside and out and giving them a nice Armor All polish.

But even without Army requirements, we wouldn’t dream of leaving behind a nasty mess for other people to have to clean. We’ve spent days after the movers took our stuff away cleaning our empty quarters. That’s just basic human decency, basic courtesy, respect, and responsibility. Clean up your own lousy mess.

I admit I was shocked to discover the previous owners had not bothered to show us that same courtesy and decency. They actually left me a disgustingly sticky, slimy, cruddy, moldy refrigerator; dog hairballs that Serena Williams could slam; and commodes full of you-know-what.

My House Ain’t The Only One

A clean house should never be considered an unreasonable expectation. Especially when the House is the Church.

Yeah, Catholic hierarchy, I’m talking to you now. My house isn’t the only filthy one in need of a deep cleaning.

I’m speaking as a lay Catholic woman and a mother: Patience and benefit of the doubt are all spent, all gone. You get no more. You have utterly failed to preserve the trust of the faithful whom you are supposed to serve and shepherd.

You have befriended the wolf (actually, you’re sleeping with him) and allowed him free roam in the House for decades now, and his excrement is in every corner.

I read the lurid, despicable accounts of “Uncle Ted” McCarrick and literally felt the vomit rise in my throat. How many of you have known for years, for decades, about this pervert in a collar? And you kept silence, even protected and promoted him, and sent him out among us, among our children! How dare you do such a thing?

How many more “Uncle Ted’s” are there??

Say It Out Loud

How about we speak of perversion and mortal sin? I say “hear hear” to this open letter to the USCCB, even though the author curiously avoids naming the obvious elephant.

Let’s speak of homosexuality. Let’s name it out loud. Let’s stop pretending this has nothing to do with homosexuality. Curse the political correctness, all of you, and grow a spine.

Were any of you listening to the first reading at Mass this past Sunday?

“Woe to the shepherds who mislead and scatter the flock of my pasture, says the LORD. Therefore, thus says the LORD, the God of Israel, against the shepherds who shepherd my people: You have scattered my sheep and driven them away.
You have not cared for them, but I will take care to punish your evil deeds.” Jeremiah 23:1-6

The mess in my house just needs bleach and elbow grease and it will soon be gone. The mess you’ve created within the Church is literally deadly and needs the disinfectant of honesty, purity, and repentance. And because you have allowed this perversion to take such deep root, it will be more difficult to expunge.

Clean the House. Clean the filth now, and do it swiftly and severely. The faithful are angry and fed up with your corrupt, deviant, self-serving iniquity. We require a clean House and shepherds who will not mislead us.

Jennifer Hartline is a Senior Contributor to The Stream.