A ‘Christmas Star’ Will Arrive on December 21: Jupiter and Saturn Will Align to Create a Phenomenon Not Seen Since the Middle Ages

A celestial phenomenon not seen for 800 years will happen just after sunset on the winter solstice. 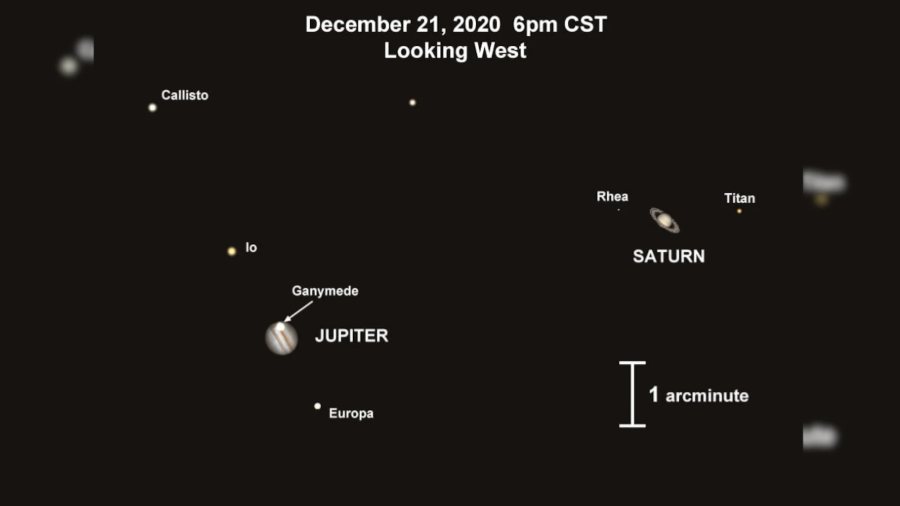 A view showing how the Jupiter-Saturn conjunction will appear in a telescope pointed toward the western horizon at 6 p.m. CST, Dec. 21, 2020. The image is adapted from graphics by open-source planetarium software Stellarium. (This work, “jupsat1,” is adapted from Stellarium by Patrick Hartigan, used under GPL-2.0, and provided under CC BY 4.0 courtesy of Patrick Hartigan)

The first day of winter will bring a celestial delight. According to Rice University astronomer Patrick Hartigan, Jupiter and Saturn will appear closer than they’ve been since the Middle Ages. The effect will create a “Christmas Star,” or “Star of Bethlehem.” 2020 can sure use it.

Just after the sun sets on December 21, the winter solstice, the two planets will look like a double planet, or large star.

“Alignments between these two planets are rather rare, occurring once every 20 years or so, but this conjunction is exceptionally rare because of how close the planets will appear to one another,” said Hartigan, a professor of physics and astronomy. “You’d have to go all the way back to just before dawn on March 4, 1226, to see a closer alignment between these objects visible in the night sky.”

The planets have been inching closer to one another since the summer. They will be the closest from December 16-25, just in time for Christmas.

“On the evening of closest approach on Dec 21 they will look like a double planet, separated by only 1/5th the diameter of the full moon. For most telescope viewers, each planet and several of their largest moons will be visible in the same field of view that evening,” said Hartigan.

Justin Mason, director of Old Dominion University’s Pretlow Planetarium said the event provides “a little bit of cosmic perspective.” Especially considering the possible “conjunction” or alignment of planets that astronomers believe led the wise men to baby Jesus in Bethlehem. Mason told The Virginian-Pilot that a rare conjunction of Jupiter, Venus and a star called Regulus took place around 2 B.C.

“Sometimes with celestial mechanics, things happen close together a couple of times and then that pairing won’t happen again for a long, long time.”

Hartigan added that the two will be visible low in the western sky after sunset and the event will last for about an hour.

The next time Jupiter and Saturn will be this close will be March 15, 2080, said Hartigan. After that, the next time they’re seen as a “Christmas Star” will be after the year 2400.