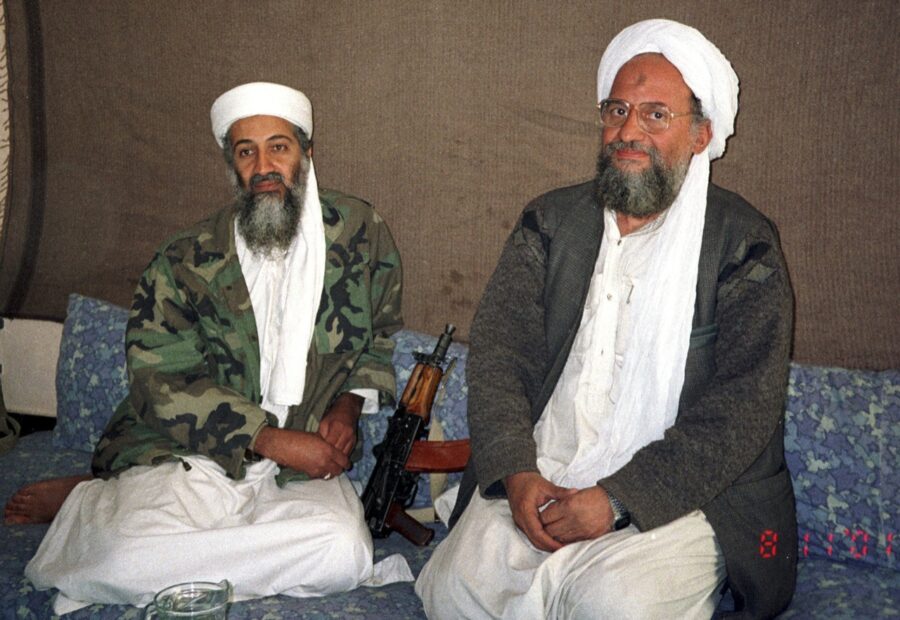 Osama bin Laden (L) sits with his adviser and purported successor Ayman al-Zawahiri, an Egyptian linked to the al Qaeda network, during an interview with Pakistani journalist Hamid Mir (not pictured) November 10, 2001.

When Jesus was nine years old, the Empire that would later put him to death suffered a horrible setback. The Romans were trying to incorporate a region 900 miles north of the imperial capital. They called it Germania. For just over 20 years the Empire had been campaigning there. As usual, its methods included military operations, as well as relocating truculent tribes. But the Romans also tried to win hearts and minds. How? Mainly by building roads (which did also provide routes for the legions) and establishing colonies of retired Roman soldiers and their indigenous wives. What is now northern Germany was well on its way to becoming the Roman Empire’s latest province.

The Debacle of 9 AD

Or was it? The barbarians across the Rhine had other ideas. Instead of going quietly into Rome’s stifling embrace, Germanic tribes turned on their masters. Led by a Romanized native, Arminius, Germanic allies lured three legions into the Teutoborg Forest and massacred the newly-recruited Roman troops. At least 15,000 Romans were lost. Most were killed in battle. The survivors were either sacrificed to Germanic gods, or enslaved.

Historians consider this a turning point in imperial, and European, history. The Romans lost their taste for expansion, at least in that direction. The Germanics’ treacherous victory was trumpeted as nascent nationalism by later Germans. Rome’s enemies in that part of the world were emboldened by learning that they could make the colossus from the south bleed. Even if they couldn’t kill it. Most importantly, the Teutoborg Forest debacle was a huge psychological blow to the world’s greatest Empire.

What has 9 AD to do with 9/11? Quite a bit, it seems to me. Particularly as both relate to Afghanistan. Twenty years ago America was attacked by those who rejected the modern Rome’s power, influence and type of world order. The mastermind of that deadly operation, Usama Bin Ladin, was Westernized. (If never a member of the imperial military.) Much as Arminius lured the legions into untenable places, UBL made it his goal in life to ensnare American forces in the Muslim world. That would, he believed, not only sap US finances and manpower. It would also, and perhaps more importantly, inflame the world’s Muslims. Thus they would enlist to combat the West’s American-led “war on Islam.”

Nowhere did this Teutoborgian strategy work better than in Afghanistan. Almost too well, in fact. The massive U.S. invasion of that country, a few weeks after 9/11, caught UBL by surprise. And U.S. forces very nearly ran him to ground then. The al-Qaeda leader had to flee to Pakistan, where of course he spent the next decade, before the Navy SEALs finally did send him to visit the huris. But not before he had enticed America into the graveyard of empires.

Rome definitely got its geopolitical  mojo back. America can, as well

Two years later, President Bush sent American forces into another modern Teutoborg quagmire. This time in Iraq. Unlike Afghanistan, however, the rationale for doing so was extremely thin. Saddam Hussein had never attacked Americans, nor allowed anyone from Iraq to do so. In fact, during the 1980-88 Gulf War, his forces had served as U.S. proxies against Iran. But no matter. Bush & Company had decided that Iraqis, who had nothing to do with 9/11, secretly yearned for The Federalist Papers and Big Macs. Even if they didn’t know it yet. So 4,431 Americans died there in our years there.

And the result? A massive increase in the reach and influence of the Islamic Republic of Iran. Why? Because the new rulers of Iraq are Twelver Shi`is, and their ranks are dominated by those sympathetic to Tehran — and thus Qom, the spiritual center of that branch of Islam.

Also, much like Arminius’ 9 AD victory over the Romans gained him other Germanic allies, UBL’s fiendishly successful 9/11 strikes made him the de facto leader of the anti-American Islamic axis. Some even deemed him the functional caliph. Others went so far as to wonder whether he might be al-Mahdi, Islam’s divinely-guided End Times warrior figure.

SEAL Team Six put that latter notion to rest in 2011. And AQ lost a great deal of its cachet. But then other groups stepped into the power vacuum, notably the Islamic State of Iraq and al-Sham, or “Syria.” ISIS. AQ and ISIS continue their war on the “far” enemy: us. Other like-minded groups direct their ire, and IEDs, at American or allied forces closer to their homes: Boko Haram, al-Shabab, the Taliban. Still, all draw inspiration from UBL’s modern Teutoborg.

Twenty years after 9/11 we, like the Romans in the aftermath of 9 AD, have lost prestige and confidence. Our enemies are certainly greatly emboldened following the Biden Administration’s humiliating bug-out from Afghanistan. As well as our 2,300 lives and wasted $2 trillion.

But all is not lost. A few years after the inept Publius Quinctilius Varus lost his legions (and committed suicide in remorse), there was payback. And it was hell for Rome’s enemies. The Emperor Tiberius sent the brilliant general Germanicus back to the north. His campaigns dispatched masses of Germanic troops sent against him, humiliated Arminius, and even regained the Eagles of two of the three lost legions. (The third was secured three decades later, by another Roman army.)

Rome’s march into northern Europe was halted at the Rhine. But the Empire, over the next 150 years, expanded to the northwest, east and south. So Rome definitely got its geopolitical mojo back.

America can, as well.

The Romans Recovered. Can We?

But that would require real leadership. Unfortunately for us Americans, our current ruling class is not as capable as was that of the Romans. Forget an Augustus or Trajan. The current POTUS is more like Gordian I, who was 80 when he came to power and lost it in short order. Or a slightly less-debauched Caligula, who tried to make his favorite horse a Consul. Joe Biden is hardly the sort to move us past the negative legacy of 9/11, notably the failed nation-changing experiments in Iraq and Afghanistan. Alas, I don’t see any even respectable politicians like  Vespasian, Marcus Aurelius or Justinian on the Republican side nowadays.

Maybe the best we can hope for is an Aurelian, a leader who truly made Rome great again. (Born on the day I write this, September 9, in 214 AD.) He reformed laws, reignited the economy, and prosecuted corrupt officials. Oh, and he brought breakaway parts of the Empire back into the fold.