With a documentary on Fred Rogers in theaters, George Wirth shares insights into the cardigan-clad puppeteer and educator. 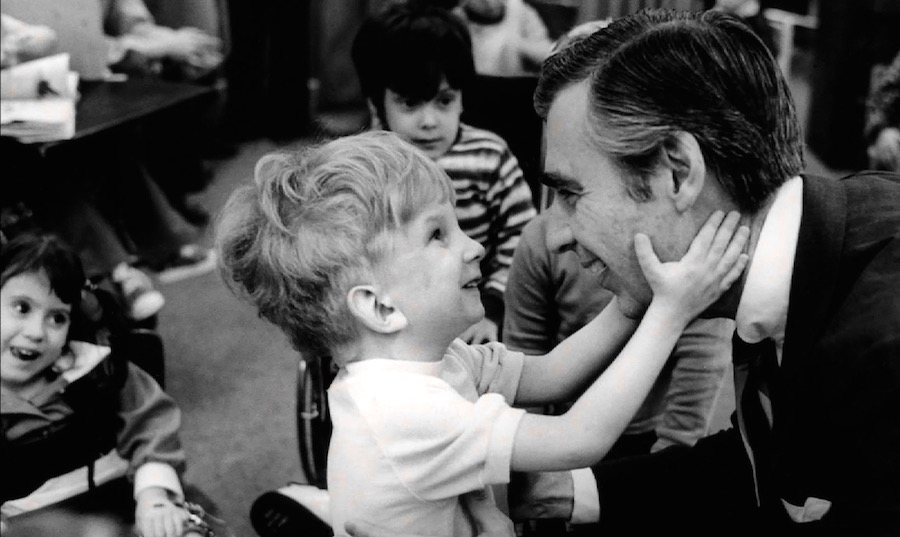 Fred Rogers meets with a disabled boy in the film ‘Won’t You Be My Neighbor?’ The Focus Features documentary opens in 500 theaters nationwide this weekend.

This past weekend, a new documentary on Fred Rogers titled Won’t You Be My Neighbor? hit number ten at the box office. Celebrating the pioneering children’s TV host and his conservative values, the film has now grossed over $4 million. On Friday, it will expand to 500 theaters nationwide.

With rare interviews of Rogers, animated vignettes and an in-depth look at his long-running PBS show, the innovative biopic has received glowing reviews from across the cultural spectrum. It’s also made fans in surprising corners, such as liberal comedian Sarah Silverman.

He’s a Republican, he‘s a devout Christian, and he’s my hero

Every single person needs to go see WON’T YOU BE MY NEIGHBOR, the Mr. Rogers doc.

You are the only one capable of being you

For generations, parents and educators have used Mister Rogers’ Neighborhood as a teaching tool. Yet few realize Christian faith is what motivated Rogers, an ordained minister. It’s an aspect the new documentary places front and center including segments with his close friend, Presbyterian minister George Wirth.

Won’t You Be My Neighbor? reveals that Fred Rogers’ gentle persona had its breaking point — as when TV shows targeted children in crass, commercial ways. In an interview from Pittsburgh, Rev. George Wirth talks about their friendship, Rogers’ faith and the secret of his success.

Making Friends at a Funeral

The Stream: When did your friendship with Fred Rogers begin?

Reverend George Wirth: In November 1983, there was a memorial service for a mutual friend of ours. Robert Holland had ministered at the Shadyside Presbyterian Church in eastern Pittsburgh, which is where Fred lived and where his headquarters was — and still is.

This Presbyterian minister had died and I said the prayer in the service. Fred was all the way toward the back of the sanctuary, as I recall. About three hours later, I received a phone call from Mister Rogers.

He said, George, I was at Bob Holland’s service. Your prayer was lovely, I could tell you really miss your friend. I wondered if you and I might get together just to talk about that. It was out of the blue, and I agreed.

The next day we had lunch at one of his favorite restaurants, a place called Duranti’s. The next three and a half hours, we talked, laughed, cried and prayed. He finally said: You know, I’m sad you lost such a good friend. Maybe you and I could become friends as well.

That was the beginning of our relationship that lasted until the day he died in 2003.

The Stream: How would Rogers contrast popular children’s entertainment with his show?

Wirth: Seeing all the craziness that is on television — throwing pies into other people’s faces, flashy editing, loud noises and the like — it was painful for Fred. He knew children don’t respond to all that chaos.

Children prefer a more natural, low-key relationship with whoever is on the television set. Fred was deliberate. He would look children in the eye through that TV screen, use a soft voice and speak words of affirmation: “I like you just the way you are.”

It was the real Fred Rogers on television. Few in the entertainment industry are like him. There was an incarnational sense about Fred. He really had the spirit of the Lord pulsating in his soul.

The Stream: How did Mister Rogers’ Neighborhood address equality and race relations, which were contentious when the show premiered?

Wirth: Fred knew that people of all cultures and races are all God’s creation. Particularly when his show began, for white people to respect black people and treat them with love and kindness was not common.

As we see in the movie, Fred chose François Clemmons, whom I know, to have an important role on the show. When Mister Rogers invites Officer Clemmons to soak his feet in that little pool, it was a big deal in 1969. Whenever a person of color was in the Neighborhood, Fred really made it clear: This person is a child of God.

That was also true about women, as many starring in the show were female. Mister Rogers was very deliberate about the sense of equality, showing men and women being treated with respect. They’re different but neither is better than the other. Fred Rogers (left) with François Clemmons (right) appear in his show Mister Rogers’ Neighborhood, as seen in the film Won’t You Be My Neighbor?

The Stream: How did Fred Rogers integrate his faith into the show?

Wirth: Fred once gave me an insight into his television ministry.

No one had ever said those words to me. It changed the way I thought about being in the pulpit. I always knew there was a blessing involved if you are faithful in your preaching and teaching. I had never heard anyone describe it as holy ground.

Fred believed God helped give him the words for the scripts, which he wrote himself. Everything he would say, the puppets and other performers, he believed was sacred work. There was such joy in the hearts of people who worked on the show. The atmosphere on set was like Psalm 100: “Make a joyful noise to the Lord.”

Really, Mister Rogers’ Neighborhood was about love. Fred lived and embodied First Corinthians 13 on his program, showing how love is the greatest lesson. He did the same in his books. He did it in the more than 60 commencement addresses he gave during his lifetime.

How Rogers Responded to Church Conflict

The Stream: After beginning his TV career, why did Fred Rogers go back to seminary and become ordained?

Wirth: He was ordained because, for him, Mister Rogers’ Neighborhood was ministry. Going to Pittsburgh Theological Seminary deepened his faith and he derived really good things from it.

He loved Greek. I have more letters from Fred Rogers in boxes than I could begin to describe. Often he would sign it, Charis, which is Greek for “grace.” Or Agape in Greek letters, which means love.

Publicly, Fred was reserved about being a minister. Once he was ordained, he would declare to those who asked: This show is my ministry.

The Stream: Those outside Presbyterian circles can find its various streams confusing. Could you explain why the church split? And how did Rogers respond?

Wirth: I grew up in a Presbyterian minister’s home. My father believed in the inerrancy of Scripture and did until his 76th year when he died. I was raised in that environment and have been ministering now for four decades.

Some congregations have literally split right down the middle because people are not on the same page about certain issues. Generally, the splits center on the interpretation of the Bible, the role of women in ministry and, over the last quarter of a century, the place of people who identify as homosexual. I know many Christians who fight about issues like the inerrancy of Scripture today.

Splits in the church were hard for Fred Rogers. He was a peacemaker. He believed when Jesus said, Blessed are the peacemakers for they shall be called children of God. He took that to the bank. Fred believed it and he lived it.

You can find places in the Bible where it talks about shaking the dust off your feet and moving on. We also see in the Pauline epistles where Paul appeals to the Christians in Corinth: Stay together, stick together — don’t split apart.

The painful thing for Fred was to see brothers and sisters, especially in the Presbyterian Church, become divisive and divided against one another.

The Secret of His Success

The Stream: Education today often focuses on information and IQ. What made Rogers emphasize grappling with emotions and the challenges of life?

Wirth: Fred Rogers had a high IQ. He was very smart, with several earned degrees. But his emotional quotient, or EQ, made him unique. As he met people for the first time, or related to his family and circle of friends, Fred was uplifting to everyone.

His emotional quotient was directly connected to his faith. Christian author Tony Campolo has said: “Christ in me sees the Christ in you.” This reflects the incarnational theology of Mister Rogers — all of us are created in the image of God.

Being created in the image of God is what makes us special, including and especially children with any kind of disability. He had a special impact on them. His compassion and empathy enabled him to connect with children and adults in incredible ways.

Probably the most famous interview Fred ever did is with Jeff Erlanger, the quadriplegic boy in his wheelchair. When Fred begins one of his songs, Jeff knew all the words. When I went with my wife to see the film, the whole audience in the theater was crying during this scene. It’s because Fred knew that boy was special and treated him as such.

The way he related to people was contagious. The Christ in Mister Rogers saw something in you that is the image of God. Because of the example he was, I believe America needs this movie today.

The new documentary Won’t You Be My Neighbor? opens in theaters nationwide this weekend.

Starting the School Year Right, With Both Science and Scripture in Your Backpack