5000 Blankets, Based on a True Story, Explores Mental Illness, Homelessness and Overcoming Crises

5000 Blankets tells the story of Cyndi Bunch and Phillip Saunders, who founded Phillip's Wish, a nonprofit that helps the homeless by providing blankets and other basic necessities. 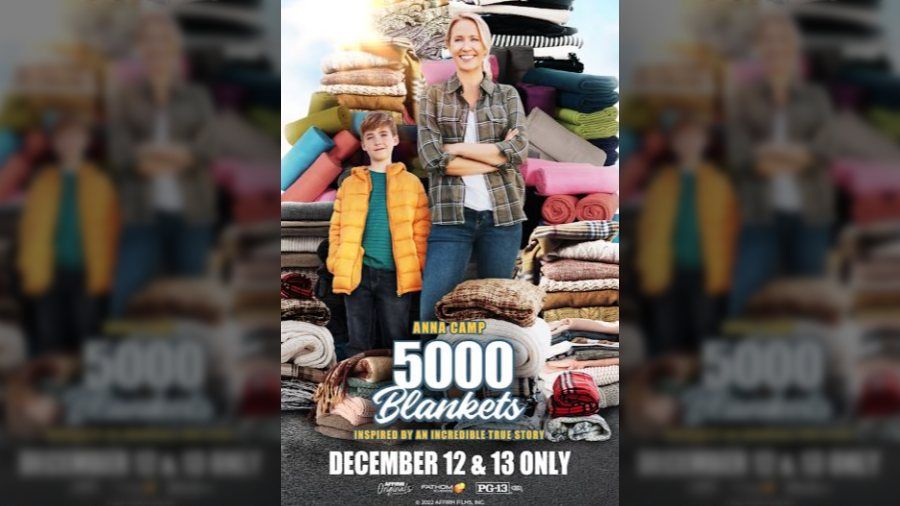 The director of 5000 Blankets, Amin Matalqa, said the universal story of the human struggle in it drew him to make the film, which is based on the true story of Cyndi Bunch and her son, Phillip Saunders:

It’s the sense of empathy that you get out of it. The script was a page turner. It was not didactic in any way. It was just honest to the characters. It moved, it was just a beautiful story and it really felt like a Rocky story. You know, someone who gets beat up by life and they choose not to see themselves as a victim. They get up and they keep taking punches, but they are determined to do something. And I was so inspired by Cyndi’s story.

Years ago, Cyndi and Phillip started gathering blankets for the homeless after Cyndi’s husband left the family due to mental illness. They looked for him on the streets of downtown Fort Worth, Texas, and became friends with some of the homeless in the process. They began handing the blankets out to the homeless in the area. They now run a nonprofit called Phillip’s Wish, which distributes blankets and other necessities. The film follows their journey.

“I think this movie is going to open a lot of eyes,” said Cyndi. She continued:

Because we all have a story. Each and everyone suffers some kind of hardship in their life that changes them. And if you can’t share that, you, you hold it inside of you and it can either make you bitter or it can make you better. We don’t want to make people bitter. We want people better.

While the film is not a “faith-based” one, it tells the story of the faith of Cyndi and Phillip. Amin said his audience, however, is everyone. “If you do something that is a story of human triumph over struggle, then it should be relatable to anybody. I don’t want to make movies that only speak to just a specific audience. I want to make something that’s relatable with anybody around the world really. And that’s been my mission with all my movies that I’ve worked on before.”

One Person Can Make a Difference

Amin hopes audiences will understand that one person can make a difference. “I hope they’ll feel … a sense of empathy for people they don’t recognize on the street. … [T]he stoic philosophy of the whole movie is, it’s up to you to make a difference. Nobody owes you anything. You’ve got to get up there and take matters into your own hands.” Amin reiterated that Cyndi and Phillip started out with blankets, but now give food and all sorts of donations to the homeless.

“I had this dream that I wanted a food pantry,” Cyndi added. “So we built one in my garage. So, we work strictly out of my house and there’s no overhead, no paid employees. So everything that goes into the nonprofit goes back out to the community, which I think is beautiful.”

Cyndi wants audiences to find their purpose. “I want people to realize that they are seen, that their struggles were my struggles. We all can struggle through this together. I want to give people a sense of hope not to ever give up. Keep the faith, keep moving. Find your purpose. Because everybody has a story. And everybody’s story does have purpose, and purpose is so beautiful, powerful.”

5000 Blankets, a Fathom event, will be in theaters nationwide December 12 and 13.

Homelessness in America: Why Many Solutions Fail

Heroic DisGrace: What One Man With a Bipolar Disorder Diagnosis Learned About Healing, Hope and the Heroic Love of Jesus

Finding Rest: A Survivor’s Guide to Navigating the Valleys of Anxiety, Faith and Life: a Must-Read During the Pandemic