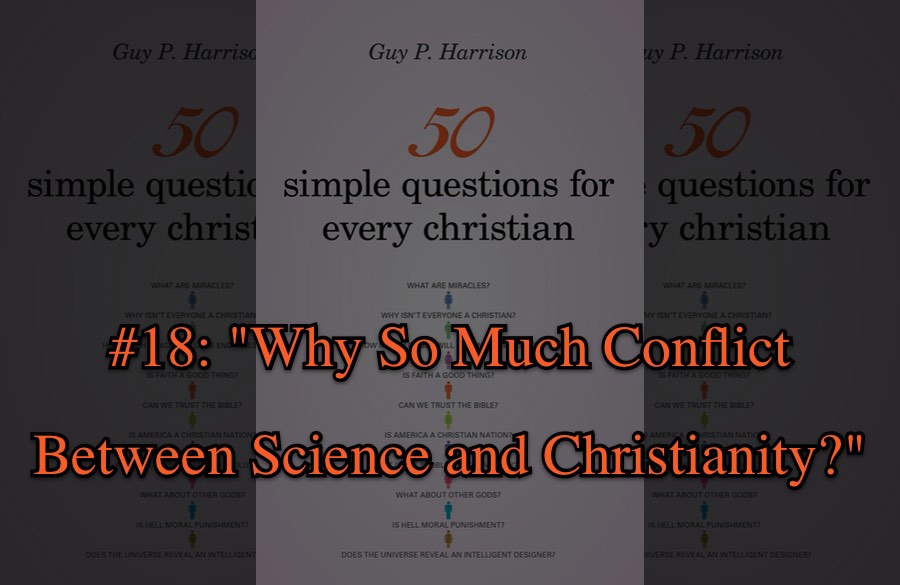 Why is there so much conflict between science and Christianity? Guy Harrison opens his 39th question noting,

For many centuries, a strange war has raged between science and Christianity. People have physically suffered and even died on the frontlines [sic] of this conflict as scientific discoveries unsettled the foundations of faith. … Must Christianity and science forever clash, or can a way be found that would allow them to coexist peacefully in the same universe?

They got him. They caught him believing the lie. He’s not the only one, I’ll grant you; a lot of people think there’s been this long war between Christianity and science. You know who doesn’t believe it, though? Historians of science. People who actually study these things. They know it’s a fabrication — an effective one, but nothing more than that. And they wish it would go away.

I’m not talking about Christian historians, by the way. It’s all historians in the discipline, regardless of their religious beliefs.

So where did this myth come from? The clearest brief exposition I’ve found is this one from the University of Wisconsin, written by David C. Lindberg and Ronald L. Numbers. They tell the story of two avowedly anti-Christian academics, John Draper and Andrew Dickson White, each of whom set out to undermine religion by inventing false histories. Read it and be fascinated. There was never any historical conflict until they made it up, centuries after the fact.

This is not conspiracy theorizing, I assure you. It’s mainstream historical teaching now. This “science-religion conflict” is every bit as much a myth as the idea that people used to believe the earth was flat.

“They didn’t?” No, they didn’t. They knew it was round, and they even had a pretty good idea how large it was. The myth says they thought Columbus was stupid for sailing west, because he’d fall off the edge of the earth. The reality is they thought he was stupid because they thought it was ocean all the way around to the Pacific Islands, and he’d never make it that far alive.

The likely source of this myth is even more entertaining. (Even Wikipedia gets this right.) Remember those old stories of Rip Van Winkle, who took a 20-year-long nap? And the Legend of Sleepy Hollow, with its “Headless Horseman?” The same writer of fantasy stories, Washington Irving, seems to have been the person who invented the fantasy that people in the Middle Ages believed the earth was flat.

Irving wrote it into his imaginary history of Columbus in 1828. People mistook it for a scholarly work, and everything fell off (ahem) the edge of the earth from there. It didn’t help that some academics supported the myth, thinking it would show how stupid those medieval Christians must have been.

But What About Galileo?

But then there’s the Galileo story. Now, that’s proof that religion persecuted science, isn’t it? No. (Check out the Lindberg and Numbers article again.) Yes, the pope had him put under house arrest. Yes, there was a scientific dispute involved. But the story had a lot of politics in it, too. Galileo called the pope “Simplicio,” at a time when the Protestant Reformation already had the pope under too much stress.

The problem was not primarily Galileo’s science, as evidenced by the fact that the overwhelming majority of scientists, up to and through the Scientific Revolution, were believers.

But even if Galileo were an example of religion persecuting science, one must ask the obvious question, “Okay, he’s one example. Where’s the other one?” It’s hard to be an example of a trend if you’re the only instance. And Galileo’s case is the only one even remotely resembling this so-called hostility against science.

Coexistence Is Possible. Resistance Is Futile.

Harrison thinks science and Christianity should be able to coexist. He’s right, but he’s wrong. He’s wrong in that, like a lot of other writers, he betrays a bias toward a Borg-ian partnership: Christianity can continue if it lets science take over. “You will be assimilated.”

Here’s an example — though it flows so naturally out of his pen, I doubt he even recognizes it for what it is. “Is there any doubt,” he asks, “that even the most extreme fundamentalist Christians … would be overjoyed by news of scientific proof of Jesus’ divinity?”

Sorry, but no. Harrison assumes that science is the one royal road to knowledge, and that even Christianity must bow down to it. But this is foolish. There is no lab test for divinity. There is no set of example gods that science can measure and categorize, so that it can count Jesus as a member of the set. (Is that not obvious?)

It’s not that we can’t know the truth of Jesus’ deity, it’s that science is the wrong method for knowing it.

In fact, a lot (definitely not all, but a lot) of today’s conflicts between science and religion come from “scienceL” trying to do what science isn’t mean to do. Like pronounce that there is no such thing as a soul, or that God wasn’t there at the beginning putting the universe in place.

But I don’t want to blame science for that; that’s why I used the scare quotes. It’s not science, it’s scientists; and far from all of them.

There are conflicts between “science” and Christianity these days, sure. This should come as little surprise. They’re two different ways of approaching knowledge of reality. Science is very much a work in progress, and in certain important areas — like creation, where solid, believing Christians still have differing views — Christian theology still is, too.

Why would it surprise us that they don’t agree completely? Why call that “conflict”? Can’t we call it part of the process of discovery?

In the end, between true Christianity and accurate science there can be no real conflict. Science is, after all, the study of God’s creation. In the meantime, though, it would certainly help if people would quit believing myths — myths like the one Harrison has propagated again.