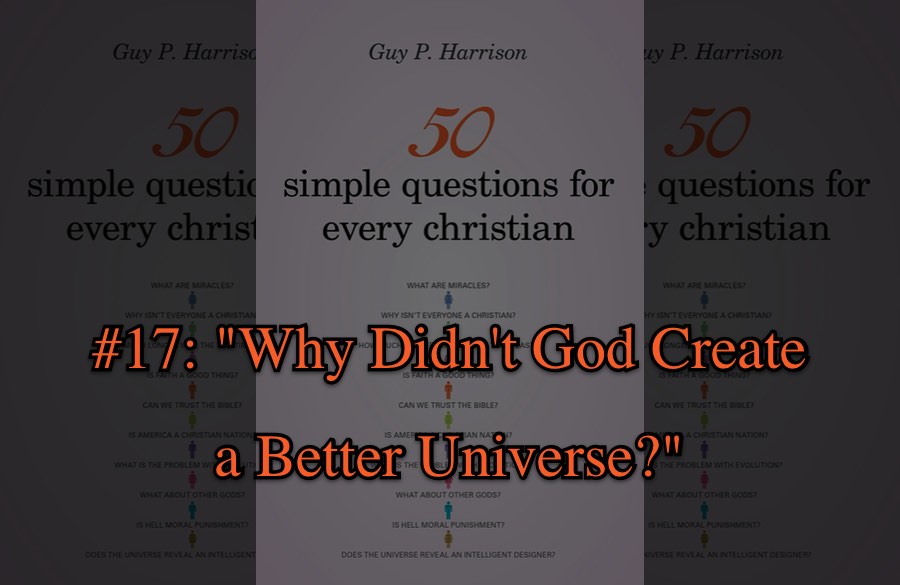 After a hiatus to work on another extended Stream project, I’m resuming my extended series of answers to Guy P. Harrison’s book 50 Simple Questions for Every Christian. Read the series intro here.

The Creator screwed up: Just ask Guy Harrison. He’ll tell you. Not that he thinks God really exists. If He did, though, this flawed and fatal world of ours would prove He didn’t know what He was doing. Harrison would have done a far better job of it, and he tells us about it in chapter 31 of his book of questions.

They say the basic human sin is pride. This certainly qualifies. But Harrison isn’t alone in it. Ideas like these have been reverberating through the atheist internet for years. Do they even make sense, though? Let’s look at some of them.

Harrison’s first correction would be to make the universe human-friendly. Everywhere. “No deadly radiation, no asteroids or even micrometeorites. … Imagine being able to set sail across the solar system, across the galaxy in open-air space rafts, feeling the warm, gentle breeze of solar winds in your hair.”

To his credit, the Harrison recognizes that as a dream too far. But that doesn’t wake him from other dreams. He’d still create a world without all the nasty natural stuff that he says isn’t “much fun for the life-forms I intend to create.” There’d be no predators, no prey, no meat-eating at all. The only food would be plants, and he’d make sure they’d feel no pain.

There’d be no infectious diseases. Maybe not even any death, though he’s not quite sure of that. Overpopulation? He’d avoid that by “tweaking reproductive rates” and by making it easy for humans to spread across the galaxy.

He’s not sure he’d “bother with a worship-style religion for [his] more intelligent creatures.” He adds, “I certainly don’t imagine that I would feel a need to bath [sic] in their gratitude and reverence for my awesomeness every day.”

He definitely wouldn’t “generate doubt.” “My first step would be to make every one of them certain that I exist.” He’d do that, maybe, by writing the schematics to “an energy-producing machine that is trillions of light-years beyond their current technology.”

And as creator, he would give recommendations, not commandments. The first is simply “Forgive.” The fifth is, “Think independently.” Seventh: “Be nice; be really, really nice.”

That’s the kind of world he’d have created if he’d been offered the chance. It’s a proud vision in the worst sense of the word. He’s set himself as smarter than God, which makes it a very foolish vision. Let’s examine a couple reasons why.

Independent Thinkers Who Can’t Be Wrong About God

But how would you or I be convinced this Harrison exists? He’d wow us with science trillions of years ahead of your time! Schematics, even! He thinks that would prove there’s a Harrison. What it really shows is how grateful we should be that there isn’t. I’d really hate to live in a world run by a god who thought that kind of thing would prove or mean anything at all.

Just picture what would have happened if our God had tried that. (Don’t worry, He’s wiser than that.) Forget “trillions of years;” let’s just do hundreds, and let’s go with the best-case scenario: Isaac Newton, probably the greatest scientist of all time. Imagine him looking at the schematics for your smartphone. Would he conclude, “A loving Harrison must exist, and want us to know Him”?

Worse yet, the Harrison imagines that God wants us to merely follow a logical syllogism. But as James 2:19 tells us, the Enemy can manage that: “You believe that God is one; you do well. Even the demons believe — and shudder!” God is not seeking people who conclude that He exists. He wants people who will love Him. Schematics won’t do that. They wouldn’t do it even if we could read them! It takes a relationship, not a deduction.

God Gives Us Room To Choose

It takes a choice, too. Harrison would force people to believe in the Harrison. The real God gives us room for choice: either to see Him for who He is or not to see Him, to love Him for who He is, or not to love Him at all. He doesn’t force it on us; not love, not even belief. He has always there, always apparent to those with eyes to see Him; yet at the same time He hangs back just enough so that others can miss Him if they wish to.

It’s astonishing, really, how it’s been that way since the beginning. The more we know about, well, everything, the more God remains in that same position: We can still either see Him or not, depending on how we choose to look at reality. You’d almost think Someone had fine-tuned the world so that belief in Him was always possible, but never compulsory.

That leaves us the freedom to believe, love, and worship Him freely.

Worship, by the way, isn’t for God to “bathe in,” as Harrison thinks. God doesn’t need a bath. It’s not for Him but for us. We need to worship because it means we’re seeing God for who He. We’re seeing reality itself for what it is. Not to worship is to get the most fundamental facts of reality completely wrong. Worship is nothing but our expression of wonder at the greatness we see in God.

But I suppose if our creator were a Harrison instead, worship wouldn’t mean the same thing. It’s only natural to worship the Creator if the Creator is truly worth it.

The Pride of a Foolish Creature

The Harrison would create a nice universe. Nice for his creatures, that is. No one gets hurt, no one gets sick, you can go for a sail between the stars, and everyone is so really, really nice, it’s hard to imagine why he’d start his ten recommendations with “Forgive.”

But “nice” is boring. Read any novel, watch any movie, and you’ll know exactly what I mean. We want something to push against, something that’ll push back, so we can grow; so we can become fully adult. God wants it in order to build our souls for eternity.

And above all, our God hasn’t created the universe mostly for us, anyway. He created it for His own glory, to display His beauty, His power, His grandeur. And I think also for Himself to enjoy.

There is a Harrison, and there is a God. God does His God job a whole lot better than this Harrison ever could. I pray the Harrison will recognize that reality soon enough.