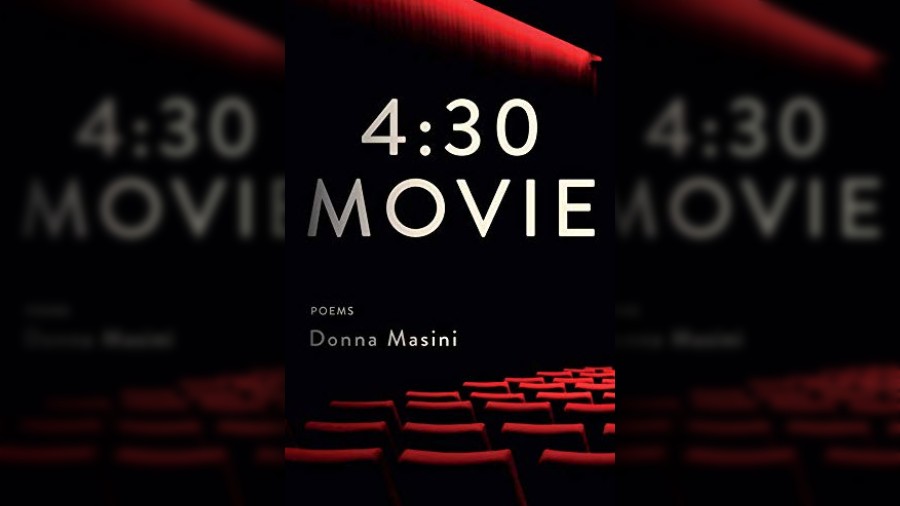 4:30 Movie, a collection of poetry by Donna Masini, is a good book for our times. First published in 2018 and recently released in paperback, it explores two themes. One, the illness of Masini’s sister Karen, who died from cancer in 2014. Two, how escaping to the movies provided Masini with relief as she grieved the loss of her sibling.

4:30 Movie was not written with the COVID pandemic in mind. But its imagery of illness and deep praise for the magic of movies — a mystical, dreamlike experience, born in America, that has been painfully lost in recent mask-wearing months — makes these poems poignant and powerful.

Masini is a recipient of a National Endowment for the Arts Fellowship, New York Foundation for the Arts Grant and a Pushcart Prize. She is a Professor of English at Hunter College, where she teaches in the MFA Creative Writing program. 4:30 Movie is poetry written with great skill. It will hold personal meaning for those of us who have worked at movie theaters or who just love going to see films.

How I Learned to Love Movies

I grew up in a movie-loving house, and worked in a movie theater in Maryland when I was in college. It was called the Bethesda Cinema and Drafthouse. The Drafthouse had originally been the Bethesda Theatre. It was designed and built in 1938 by the firm of the John Eberson, dean of American Theatre Architect. The theater was was designed in the historic Streamline Moderne style, and still has some of the art deco illustrations — spinning stars, planets, suns — on the deep blue walls.

In 1983 the Bethesda re-opened as the Bethesda Cinema and Drafthouse. We featured “second-run” movies, that is films that were no longer in wide release but had yet to come out on VHS video. The interior had been reconfigured, the old rows of seat removed and replaced with round tables and low, comfortable swiveling chairs. The Drafthouse served beer, wine, and food (pizza, nachos, sandwiches). I saw hundreds of films over and over again. Like Quentin Tarantino working in the video store, I learned about movies by watching movies. I understand good music cues and the tragedy of bad editing.

I still remember seeing Blood Simple, the Cohen Brothers’ first film, as well as Back to School, Top Gun, Blue Velvet, Broadcast News, Aliens, Little Shop of Horrors, Harold and Maude, To Live and Die in L.A., Big Trouble in Little China, and Beverly Hills Cop, among others. I worked the popcorn machine, gingerly walked around the wagon-wheel-sized platters where the film spun out in the projector booth (really more of a large room), and once mounted a new marquee that only required two letters: F/X — a cool (and now forgotten) thriller. Once I witnessed a film actually snap during a showing — American Anthem, the cheesy 1986 vehicle for gymnast Mitch Gaylord. When the film broke, the screen flickering then going blank, the audience actually applauded.

I give this backstory because in all of that experience, as well as reading a lot of books about movies, I have never come across anything that captures the spiritual immersion and restorative magic of going to a movie as well at this poem from 4:30 Movie:

The Lights Go Down at the Angelika

and you press into the dark, imagine
the stranger two rows back, that fragile
chance you’ll forget in the second trailer.

Now it’s quiet, still
this burden of being watcher and screen
and what floats across it–light pouring out

its time and necklines and train wrecks.
What a relief to yield to the EXIT
sign red “I” blinking like a candle.

Soon the enormous figures moving
across rooms, the emphatic narrative
arcs. (There’s the thrum of the subway,

its engine of extras.) Here now
the beginning of trivia tests. Warning puppets
with brown-bag faces and fringy hair.

You’re almost here. But what you want
is the after. How yourself you are now
walking into the night, full moon over Houston Street,

at the bright fruit stand touching the yellow
mums. Here you are: Woman with Cilantro
listening to the rattle of the wrap,

the paper sound paper makes after you
have heard movie paper. Apples are more apples.
Paper more paper. Cilantro, its sweaty green self.

Masini understands that movies are not only escapism, but a heightened, often horrifying close-up of our spiritual and biological fears — fears that can can become real. Here is the first short poem that opens 4:30 Movie:

All these years, my sister says,
worrying something would happen
And now it has

The confluence of the subconscious dreams reveled on celluloid and the cold reality of hospital gowns, and cold metallic testing are the two reels that give 4:30 Movie its momentum. Life, like a movie, is miraculous and over too quickly. “Trailer” is a script of a coming attraction, featuring Philip Glass music. It’s a medical drama that reflects the reality Masini is living in in hospitals where her sister is being treated. “The Extra” explores an actress preparing for her tiny role, her process a meditation on The Tibetan Book of Living and Dying.

A Book Born Out of Loss

Masini’s poems are sharp and defiant. Avoiding the bathos or kitsch that was so prevalent in the art surrounding the AIDS epidemic and which mars so much of the discussion of illness in the popular culture (“I’m kicking your butt, cancer!”), Masini rages against the dying of the light. “What Didn’t Work” is a laundry list of things that could not stop her sister’s end: Chemo Tarceva prayer/mediation affirmation Xanax/Avastin Nebulizer Zofran/Zolof Vicodin/notebooks.” It goes on your twenty-four lines, ending in a word: “lists.”

Still, 4:30 Movie, that is to say Masini’s book of poetry itself, is a creation that was born out of loss. In other words, she produced a beautiful prayer-like book as a result of her suffering.

Now we have the COVID, which is like the Blob, the rolling, quickly expanding purple goo that almost absorbs America alive in the 1958 film. (“It creeps! It crawls! It eats you alive!) Masini remembers her pregnant mother and how the condition found a matinee analog in a horror movie classic:

I’m a blob, our mother used to say, pregnant again with that
blobby wobble. We had siblings. We knew how a blob became a baby, the mother bulb
oozing out another child, and now there are four
and it’s Steve McQueen Week on the 4:30 Movie, The Blob
ending with its ominous question. The End? This was before
I understood irony. We’d seen the drunk old man

prod the ooze and disappear, watched it grow and roll, a little dog
barking its warning … barking, barking, then the barking stops
and the blob rolls on, insistent, engulfing the doctor.