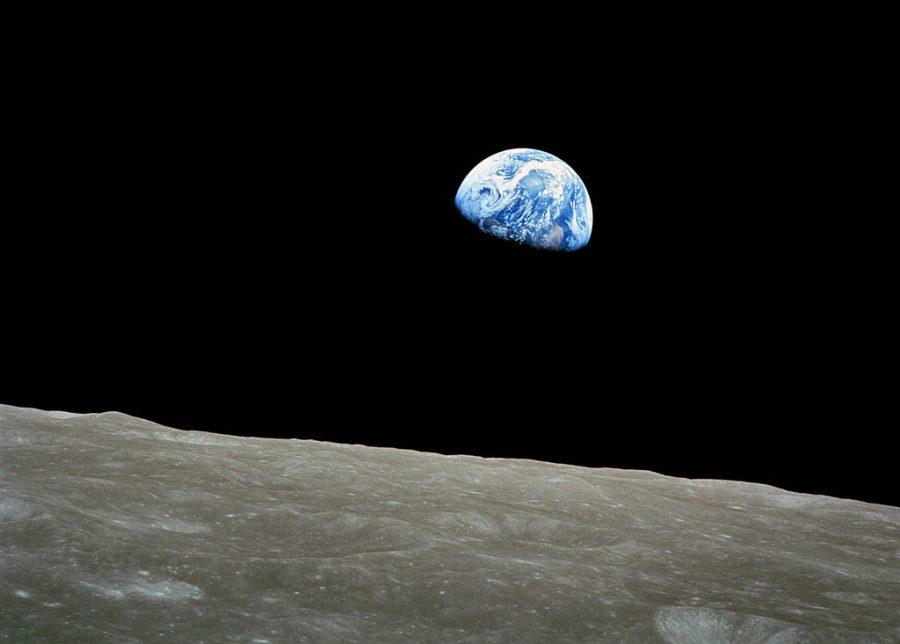 As we remember the moon landing, an event that briefly unified much of the world, today America’s often flickering attention span is on chants of “send her back.” Fifty years ago, though, a few earthlings had at least a momentary realization that there was nowhere else to go.

Watching documentaries on the Apollo era, one is struck by the very real impact that seeing our home planet from space had on the astronauts.  These were not people drawn from the “age of Aquarius” counterculture. They were military men recruited for a nationalistic campaign against the Soviets. Yet, it was the proximity of all humanity to each other that Frank Borman, the Commander of Apollo 8 and one of the first three men to see Earth from deep space, chose to emphasize to a joint session of Congress in 1969.  “The one overwhelming emotion that we carry with us,” Borman said, “is the fact that we really do all exist on one small globe.”

Feeling his own words were not up to the task, Borman then quoted from a poem by Archibald Macleish, a work which had appeared on the front page of the New York Times on December 25, 1968 — the day after Apollo 8 first orbited the moon:

To see the earth as it truly is, small and blue and beautiful in that eternal silence where it floats, is to see ourselves as riders on the earth together, brothers on that bright loveliness in the eternal cold — brothers who know now they are truly brothers.

What the world had not yet seen that Christmas morning was a spontaneously taken snapshot that would come to be known as “Earthrise” and would be viewed by billions around the globe.  (Its impact would also inspire a beautiful piece of filmmaking by Emmanuel Vaughan-Lee for the Times decades later.)  What the largest audience in human history had heard, however, was the crew’s response to the simple NASA directive to “say something appropriate” for a broadcast from lunar orbit on Christmas Eve.  After wisely jettisoning the idea of singing “Jingle Bells,” the astronauts took the advice of Christine Laitin, an immigrant from a war-torn land, to start at the beginning.  Their rendition of Genesis 1 moved millions to embrace the better angels of their nature at the end of tumultuous year filled with war and assassinations.

Earthrise inspired John McConnell, a Christian peace activist and acquaintance of Richard John Neuhaus, to create the Earth Flag, a simple image of our planet with no national borders on a blue background. McConnell campaigned for the banner to be planted on the moon itself.  That never happened. (Though, one would eventually make it into orbit aboard the Russian Mir Space Station in 1998.)  Instead, McConnell and his wife Anna would first distribute the flags in New York’s Central Park at a public viewing of Neil Armstrong’s giant leap for mankind on July 20, 1969.

On July 19, 2019, Buzz Aldrin, the second man to walk on the moon, wore a stars-and-stripes tie as he stepped into the Oval Office. President Trump used the occasion to highlight differences between the veteran astronaut and the current NASA Administrator on how humans might get to Mars.  Bill Anders, the astronaut who had the good sense to call for color film and take the unscheduled Earthrise picture, told filmmakers that he regrets the Apollo program has not brought as much of an “interlocking view” to humankind as he had hoped. “When I hear people chanting that we ought to go on to Mars,” lamented Anders, “I’m thinking, well, why don’t we get our act together here on Earth first and go to Mars as human beings, not as jingoistic Americans or Russians or Chinese.”

To some, such sentiments will sound naïve, but then few of us have seen the Earth small enough to be covered by our thumbnail.  This sense of awe at our own insignificance brings to mind King David’s words in the eighth Psalm:

When I consider your heavens,

the work of your fingers,

the moon and the stars, which you have set in place,

what is man that you are mindful of him,

the son of man that you care for him?

Some take a look from space and stop — their initial awe descending to the despair of smallness. Anders himself was a go-through-the-motions Catholic who had his faith shaken by his experience.  Looking back at Earth, he seemed to feel that his religion had sold him a bad bill of goods:  “This is the center of the universe?”

In Awe of the Creator

David could have stopped there as well, feeling isolated and abandoned, but instead he looked to the reality of a Creator as the source of his significance and shifted his awe in another direction.

You made him a little lower than the heavenly beings,

and crowned him with glory and honor.

You made him ruler over the works of your hands;

you put everything under his feet:

all flocks and herds,

and the beasts of the field,

the birds of the air,

and the fish of the sea,

all that swims the paths of the seas.

O Lord, our Lord, how majestic is your name in all the earth!

David emerged from his star-gazing clear-eyed about both his derivative position and his great responsibilities as a human and the leader of a nation. Our leaders today would do well to follow that example.

We do not live in a borderless world, but we are closer to each other than we realize.  From 240,000 miles away, the distance between Somalia and the United States does not look great at all. Yet, each seemingly insignificant human being bears the image of their divine maker and as such is worthy of great respect and care. Similarly worthy of care is the rest of an earthly creation that people first saw from a new perspective just a scant half-century ago.

John Murdock is a senior fellow with Conservatives for Responsible Stewardship and an advisor to the Earth Stewardship Alliance.  He wrote this near Houston, with the moon in view.