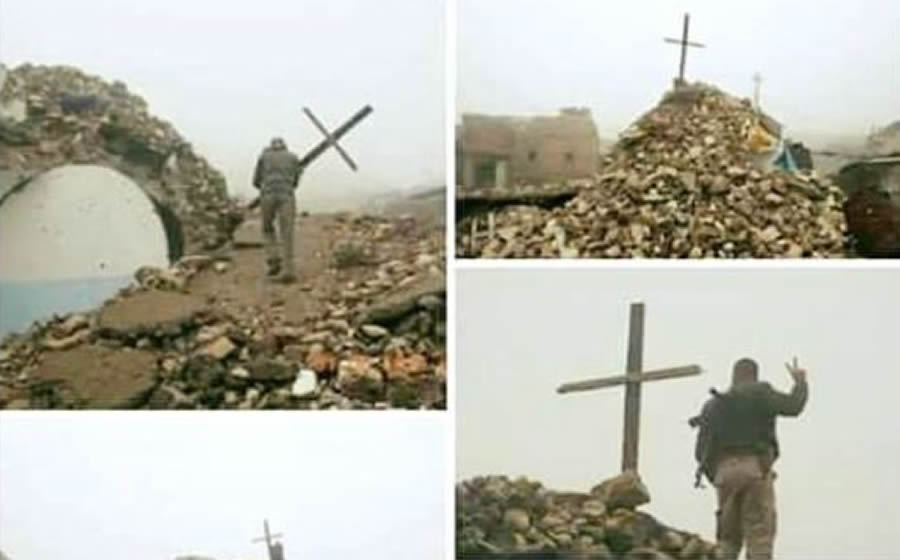 Once Iraq’s largest Christian city, Sinjar is perhaps best known as the place where ISIS massacred more than 5,000 Yazidi men and captured 7,000 women for sex slaves in November, 2014. ISIS destroyed churches, buildings and homes. The city was left as a wasteland. But on Easter Sunday, one soldier put Sinjar back on the map with a simple act that went viral on Facebook.

An anonymous soldier carried a wooden cross to the top of what once was Mt. Sinjar Church. He lifted it into place on top of the rubble. His act of faith was captured by a camera and posted on Facebook by Hazem Farraj, a Palestinian-American Christian televangelist. Above the photos, Farraj wrote:

With a rifle on his shoulder, tears in his eyes, he places the cross on the top of the now ISIS destroyed Mt Sinjar Church. What does resurrection look like? This. Happy Easter everybody. #Resurrection #Jesus

The images were re-posted by actor James Woods and other media personalities. As of Wednesday, the post has over 24,000 likes and almost 14,000 retweets.

This is what real #resistance looks like… #HappyEaster pic.twitter.com/Go9AaXrRDj

The Martyrs Among Us