In 2016 Election, Bishops Must Choose Between Open Immigration and the Life of the Unborn

The second of these is foundational. 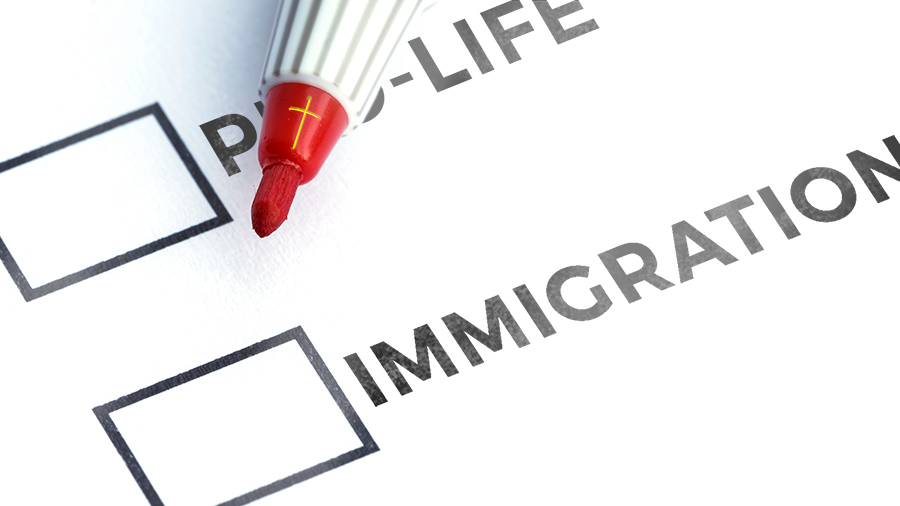 By Maureen Mullarkey Published on September 13, 2016 •

A tragic fault line runs through the approach of the American bishops to the 2016 election. On one side lies their traditional sympathy for immigration, extended now to embrace what amounts to open-borders and a reluctance to distinguish between legal immigrants and illegal ones. On the other is the indispensable Catholic opposition to abortion.

However much buttressed by religious language and attachments, one is a historically conditioned political position, the second — the right to life — is bedrock, a fundamental moral position the Catholic Church cannot abandon without losing its soul.

This November Catholics bishops are forced to choose between the two. Donald Trump promises to appoint pro-life judges and has taken a pro-life running mate. Whatever credit that might earn him in the episcopacy is erased by his stance on illegal immigration. It opposes Hillary Clinton’s, and that of the U.S. Conference of Catholic Bishops (USCCB).

Clinton’s promise to enact amnesty by executive order within her first 100 days parallels the inclinations of the USCCB. Its Committee on Immigration recently issued its own plan — “Unlocking Human Dignity” — to undermine, if not dismantle, the nation’s current detention system for illegal entrants. At the same time, Clinton remains radically and unashamedly pro-abortion.

What are bishops to do? How are individual men to proceed in their teaching role when the corporate bias of the episcopacy is at odds with itself? The tension between two compelling interests is evident in Archbishop Chaput’s oddly inconclusive posting on Catholic Philly, August 12. A spear carrier in the movement for life, Charles Chaput has been an indefatigable voice for the unborn. It is disconcerting, then, to see him constrained by institutional pressures.

His essay, “Some Personal Thoughts on the Months Ahead” sidesteps his ordained role by addressing the faithful not as a bishop but as a fellow citizen. And he speaks in code.

As a registered independent, Chaput removes himself from “routine tribal loyalty” that governs two-party elections and the media-saturated tenor of modern American life. He deplores the “mobocracy” of social media and the “catechesis of consumption” on TV:

It seems bent on turning us into opinionated and distracted cattle unable to gain mastery over our own appetites and thoughts.

The archbishop’s patrician disdain for contemporary culture is well-founded, and easily shared by his readers. Nevertheless, it does not touch the key issues at stake in this election. It offers no basis on which to frame those issues as a Hobson’s choice:

Both major candidates are — what’s the right word? so problematic — that neither is better than the other.

That equation undercuts Chaput’s acute observation that “all pressing issues [are not] equal in foundational importance or gravity. The right to life undergirds all other rights and all genuine social progress.” This brief passage is the heart of his essay, as it has been of his discipleship. Here, though, his witness is disconcertingly hedged by indirection. The archbishop exhibits uncharacteristic hesitancy in applying pro-life convictions to this election:

I do not yet know which course I’ll personally choose.

It does not help to read:

In the view of a lot of people. What matters to Catholics is the archbishop’s own view. Certainly, Chaput cannot tell his readers how they should vote. Yet he addresses them specifically as Catholic voters. It is reasonable, then, to expect him to say how he — “a brother in the faith” — intends to vote, giving reasons for his decision. Reasons can be evaluated by the faithful on prudential grounds. Enigmatic ambiguity, by contrast, offers no footing for substantive judgment.

Chaput takes aim not at the positions of either candidate but at their wealth. Yes, Hillary Clinton and Donald Trump both exhibit “astonishing flaws.” Still, they are not flawed in the same ways and hardly to the same degree, beginning with the quantum distance between them in the manner each came by their wealth. The archbishop raises the issue of personal wealth but does not distinguish between means of acquisition.

Clinton acquired hers in the pose of a public servant. She turned the State Department into a candy store for foreign interests and sold access to policy decisions. Trump acquired his through inheritance and real estate ventures. Inherited wealth is not an indictable offense; neither are casinos or Trump towers. However much these might offend tastes, they do not violate the Espionage Act, obstruct Congress, or defy the Federal Records Act.

The archbishop instructs the faithful to pray for discernment. But on the abortion issue there is nothing to discern. Prayers would be better spent in hope that the present papal campaign for “comprehensive human development” does not place the politics of immigration on a higher moral plane than the evil of abortion.