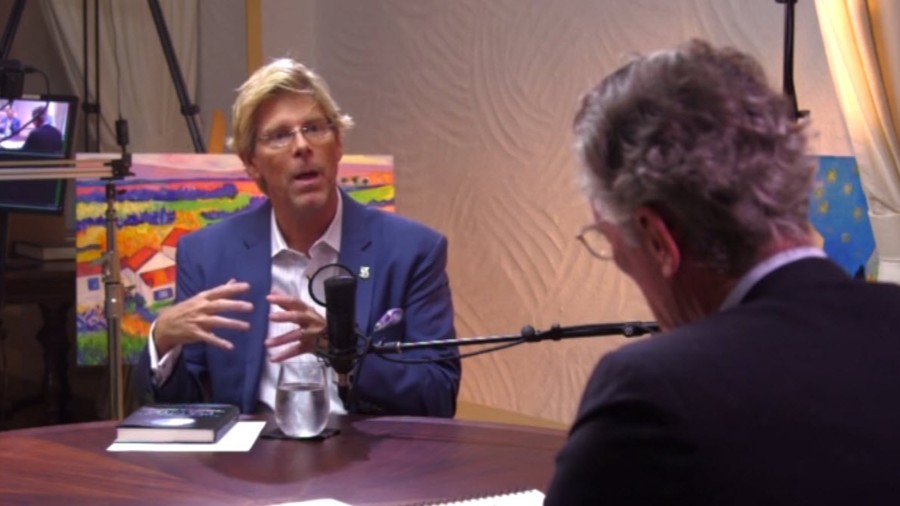 The online video platforms YouTube and Vimeo have censored a video of The Bill Walton Show about the danger of COVID-19 shutdowns for violating standards enforced by each company.

YouTube removed the 47-minute video of the program in which Walton interviews Jay Richards, one of three authors of the book The Price of Panic: How the Tyranny of Experts Turned a Pandemic into a Catastrophe.

YouTube banned the video Oct. 18, saying it “violated their community standards and their COVID-19 medical misinformation policy,” Walton, host of The Bill Walton Show and a trustee of The Heritage Foundation, told The Daily Signal in a phone interview Friday.

Walton, a successful business leader, investor, and entrepreneur, has produced 96 episodes of the show. From its inception in 2017, he said, YouTube never before had removed his content.

The episode in question, “‘Paying the Price of Panic’ with Dr. Jay Richards,” argues that “the harm caused by the lockdown vastly exceeds the benefits of protecting people from COVID-19,” Walton said.

“That is not to say that we should not be careful,” Walton said. “But I am saying you can carefully protect the vulnerable while at the same time opening up the country.”

Richards, an assistant research professor in the School of Business and Economics at The Catholic University of America, wrote The Price of Panic with William Briggs, a mathematician and scientist who was a professor of statistics at Cornell University Medical School, and Douglas Axe, a professor of molecular biology at Biola University.

The true danger of state and local governments’ response to COVID-19 “ultimately is the loss of political and religious freedom,” Richards said on Walton’s show.

“When governments use emergencies historically in order to extend their power over more and more of society, it’s very rare in which they actually retreat from that power,” Richards, also a senior fellow at the think tank Discovery Institute, said.

Upon the video’s removal, Maureen O’Donnell, digital producer for The Bill Walton Show, emailed YouTube on Oct. 20 to explain that she had read the platform’s “COVID-19 Medical Misinformation Policy” and thought the Walton program complied with it:

I have read the COVID-19 Medical Misinformation Policy and believe that our video does not violate any of the categories. The video you took down was a promotion of a book that is being published by a reputable publisher written by [three] prominent scholars. If you would please give me specifics as to which one of the categories that was violated, it would be helpful and give me better clarification.

YouTube had not responded to O’Donnell’s email by Monday, but on Oct. 21 posted “appeal rejected” on the show’s YouTube channel without further explanation.

Looking for another way to share the content with his audience, Walton’s team uploaded the discussion Oct. 19 to Vimeo, a multimedia platform. Less than 48 hours later, Vimeo emailed Walton that it had removed the video.

“You cannot upload videos that depict or encourage self-harm, falsely claim that mass tragedies are hoaxes, or perpetuate false or misleading claims about vaccine safety,” Vimeo wrote Oct. 21 to Walton.

“Our show had none of that,” Walton said after reading Vimeo’s email aloud to The Daily Signal.

The Daily Signal emailed YouTube and Vimeo on Saturday to ask why they had removed the video of Walton’s show. That evening, Vimeo replied that it would respond “as soon as possible,” but provided no explanation by publication time.

Google, which owns YouTube, responded Sunday and asked for a link to the video. The Daily Signal sent Google Press the full transcript and audio file of the interview, but did not receive a response from it or YouTube before publication.

The Daily Signal and its parent organization, The Heritage Foundation, both have encountered their own problems with YouTube in publishing online content of importance to conservatives.

In recent weeks, YouTube placed a “context” disclaimer beneath Heritage and Daily Signal videos about election integrity. These information panels, as YouTube refers to them, include a link to the Bipartisan Policy Center, an organization that provides a subjective viewpoint on mail-in voting.

YouTube also has removed two other videos on the subject of transgender ideology. In 2019, The Daily Signal’s video featuring Dr. Michelle Cretella, a pediatrician and executive director of the American College of Pediatricians, was removed for “violating YouTube’s policy on hate speech.”

Earlier this year, YouTube took similar action, removing a video of a Heritage Foundation event featuring Walt Heyer, who spoke at the Summit on Protecting Children from Sexualization. Heyer, a Daily Signal contributor who years ago sought to transition to a woman, is an outspoken critic of allowing underage Americans to undergo drugs and surgery to change their biological sex.

Social media companies such as Facebook, Twitter, and YouTube do not operate under the guidelines of publishing organizations, but Walton lamented that the lines are being blurred.

“Congress carved out Section 230 to … allow [social media companies] to put content up there that was other people’s content. And as long as they did not act in an editorial way, didn’t act as a publisher, then they could not be sued,” Walton said.

Platforms such as YouTube appear to be acting as publishers, he said, despite Congress stating under Section 230 of the Communications Decency Act of 1996 that “no provider or user of an interactive computer service shall be treated as the publisher or speaker of any information provided by another information content provider.”

Americans should “be concerned that only one side of a very complex public policy issue is allowed to be heard,” Walton said.