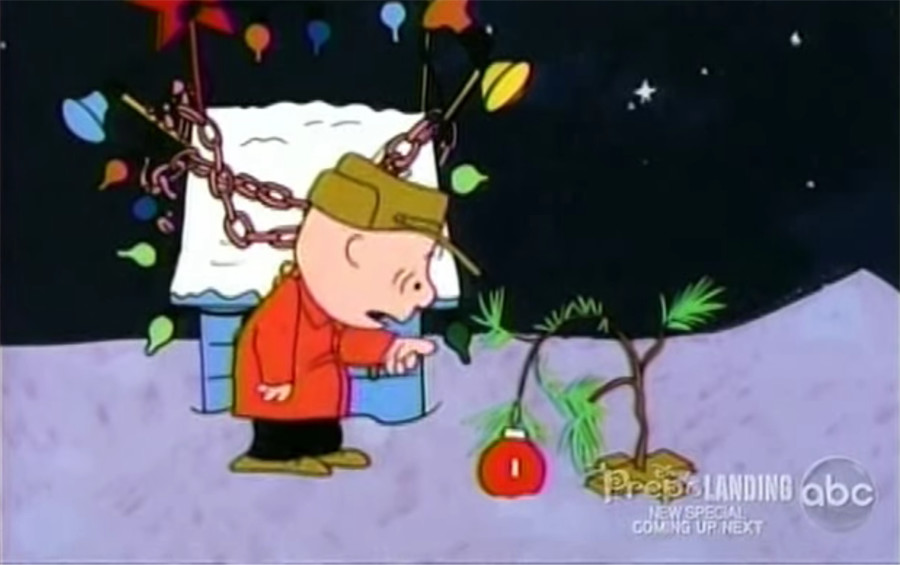 What is the essence of Christmas? For 50 years a simple cartoon movie has captured the answer for Americans of all ages: Christmas is not Christmas without something like a real tree to decorate, carols to sing and, above all, the story of the birth of our Savior, Jesus Christ.

Without these vital elements the annual celebration can be, as Peanuts anti-hero Charlie Brown confessed decades ago, depressing. In the 1965 television special, A Charlie Brown Christmas, neither tinsel, lights, snowmen or even rehearsing the Christmas play (which keeps turning into a jazz and jive session) can lift the gloom that settles on Charlie as those around him make their own fun.

Money-grubbing psychiatrist, Lucy, with her eye on “real estate” is no help. Finding that his own little sister wants 10 and 20 dollar bills from Santa Claus deepens Charlie’s disgust with the commercialism and superficiality he finds everywhere.

It’s only when he is despatched to the store to get “the biggest shiny aluminum Christmas tree he can find” that events take a positive turn. There’s one little wooden pine tree among all the gaudy kitsch and Charlie recognizes it as a key to the elusive meaning of Christmas.

Finally all becomes clear and joyous as Linus declaims St. Luke’s account of the Nativity by heart (having earlier insisted that he could not learn a script like that). Charlie’s tree, finding its proper place in the snow, is decorated and admired, the cast wish him “Merry Christmas!”, and all gather round to sing “Hark, the herald angels…”.

“There will always be an audience for innocence in this country,” said Charles Schulz, and five decades of Peanuts cartoons proved him right. In the case of A Charlie Brown Christmas, an essential part of that innocence for Schultz was the religious meaning – and snow! — central to his own experience. In the 1960s, according to researcher Stephen Lind, less than 9 percent of television Christmas episodes contained a substantive reference to religion.

Television executives hated it from the start. They found it slow and lacking in energy. It was too religious. It featured jazz — offbeat for a cartoon (Schultz already thought jazz was “awful”). It did not have a laugh track. It used the voices of real children, only some of them professionally trained. Schulz himself thought the whole thing was a disaster due to the crude animation. But it was an instant hit with viewers and reviewers alike:

Viewers weren’t nearly as cynical about Charlie Brown’s holiday woes as his corporate benefactors. Preempting a 7:30 p.m. EST episode of The Munsters, A Charlie Brown Christmas pulled a 50 share, meaning half of all households with a television turned on were watching it. (That amounted to roughly 15 million people, behind only Bonanza.) CBS finally acknowledged it was a winner, but not without one of the executives getting in one last dig and telling [executive producer Lee] Mendelson that his “aunt in New Jersey didn’t like it.”

One welcome spinoff was the death of the aluminum Christmas tree. First marketed in 1958 they were virtually extinct by 1969. Best of all, ritual annual viewings of the show help to keep the word “Christmas” in circulation, when the trend is to submerge it in “holiday” greetings and other references.

You’re a good show, Charlie Brown Christmas. Congratulations on your 50th birthday, and many happy returns!

This column first appeared at Mercatornet.com and is reprinted by that site’s kind permission.

My Hovercraft Is Full of Bias: Decoding MediaSpeak