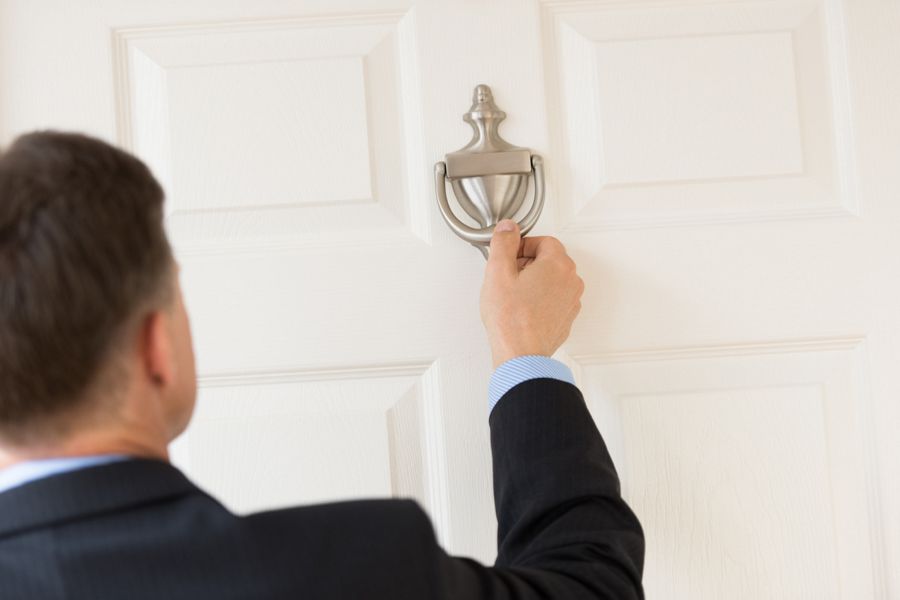 President Biden has floated the idea of sending federal workers door to door, asking if you and I have been vaccinated against COVID-19. What’s your first reaction? “They’ve got no right!” That’s correct: They have no right, and they’ve got no business asking, either.

It’s right, except I don’t think it should be your first reaction; not if you’re a believer in Christ, that is. I’d say it should come in third instead, far behind two others that are even more fundamental.

First, it’s not some symbol of state intrusion who’s knocking at your door. It’s a person. A fellow human being. Someone who’s trying to earn a living. A tough one, even.

If you’ve ever done door-to-door evangelism, you know how it feels when someone gets mad and slams the door on you. It used to be worth the effort anyway, but that was decades ago. People just don’t welcome door-to-door canvassers of any sort anymore. Your federal vaccine canvasser knows that. He or she lives that.

Sure, it’s easy to view him as a symbol of everything that’s gone wrong with the country. I don’t much care for being treated as a symbol, though, do you? I represent Jesus Christ gladly, and I hope I do it well, and I’d gladly say the same thing about representing Christianity. There’s a difference, though, between representing and symbolizing. The moment you make me a symbol of some impersonal force, you make me less of a person.

Suppose instead of treating them as symbols we make it our goal to treat them above all as people. Make their day more pleasant. Let them carry the message back to their bosses: “Those conservatives don’t agree with what we’re doing here, but I’ve got to hand it to them anyway: They know how to treat a person decently.”

That’s perspective. Still, how are you going to answer the question they ask? That’s definitely none of their business, right? Right. I say you should answer anyway — but on your terms, not theirs.

If someone comes asking me if I’m vaccinated against the virus, I’ll tell him, “I’m way ahead of you on that. I’m protected against death against all causes. Eternally.” Then I’ll just pause, and give him the opportunity to ask me what I mean by that. When he does, I’ll gladly explain. Jesus Christ has set me free from the penalty and the fear of death. It can only harm me for a moment; then comes everlasting life.

If someone comes asking me if I’m vaccinated against the virus, I’ll tell him, “I’m way ahead of you on that. I’m protected against death against all causes. Eternally.”

I won’t push it on him, and I won’t detain him. Though I’ll certainly ask if he’s interested in knowing more, I won’t try to “close the deal.” I’ll just tell him the truth in ways that stand a good chance of piquing his curiosity.

Just imagine that federal employee hearing something like that three, four, or even more times during a workday, maybe even 15 to 25 times in a week. Imagine them expecting conservatives will treat them roughly, but getting a warm smile instead, plus an enigmatic statement to puzzle over, and even (if appropriate) the offer of a cup of coffee and a moment to talk.

It kind of puts a reverse twist on the whole idea of door-to-door evangelism. But why not? The word evangelism comes from Greek root words meaning that we pass along good news.

The world has gone scared. Knees-knocking, palms-sweating frightened. Scared of the virus. Scared of global warming. Afraid they won’t get the freedom to express who they are. Underneath it all is a fear of death and a fear of dehumanization. What better opportunity to share good news, than when someone comes right to your door to talk about fear and death?

In the end they’ll still ask whether you’ve been vaccinated. You can answer however you wish, keeping in mind still you’ll be talking to a person whom God loves. Remember that as Christians, we can offer hope, and we can offer humanity. Above all we can offer true life, life that no vaccine can match and no death can overwhelm. This is no intrusion. This is an opportunity. Use it well!