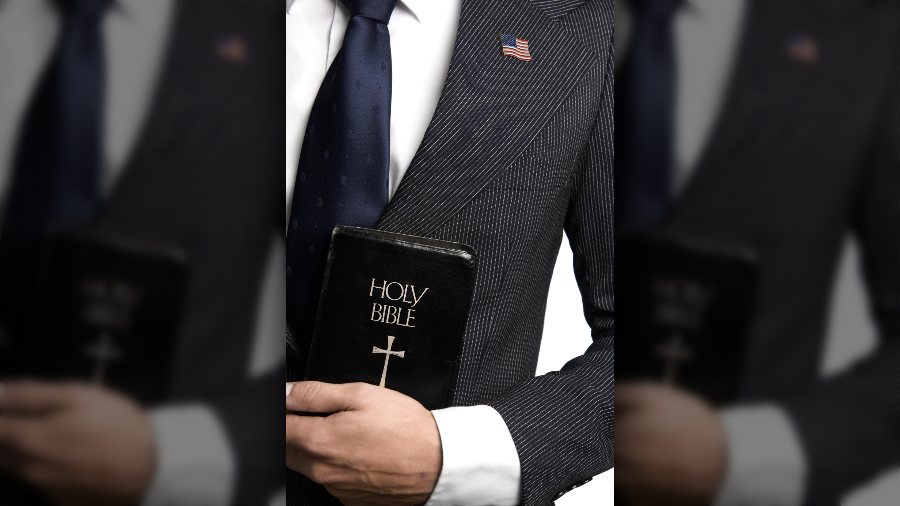 I used to be one of those people who argued with the talking heads on television. I was a political junkie from my earliest days, so there I would be on a Saturday morning, thanking Bill Buckley on the other side of the screen for correcting his Firing Line guest’s wayward thinking or telling Eleanor Clift on “The McLaughlin Group” that there is another way to think about things (as if she didn’t know that on her own, or, well, could hear me).

Over the years, I’ve gotten a lot more peaceful about things and watch a lot less television. These days, with people seeming to treat politics like a sport — or a never-ending reality TV show — it’s good to remind yourself there still is a lot more to life. (Also, there is the fact that I have a few platforms now where I can communicate an opinion or insight to actual people reading. Thank you.)

The Abuse of Religion in Politics

But lately, I’ve reverted to hollering at the screen again — albeit typically on my phone now. And it’s principally in response the use and abuse of religion in politics. I love my Catholic faith, and over the years have sat at Mass alongside people with whom I don’t agree on some fundamental things. For a period of time in college, I would frequently be at Mass with Ted Kennedy at St. Joseph’s on Capitol Hill. He would quietly sit in the back and not go up to Communion. I always prayed for him when I saw him, and respected the humility on display that wasn’t necessarily what I’d see on the Senate floor or at a campaign rally.

The point is, faith is the most important thing alongside life and family, and so, of course, it’s important to politics. But we had better be careful about trying to conform God to our political image. God is bigger and better than Donald Trump, Joe Biden or any political party, than everything of this world.

The pandemic and unrest of the recent months has been laced with anxiety for many. When Joe Biden decided to quote Pope John Paul II, I found myself reverting to my screen-yelling days. The only healthy response is to re-read John Paul II’s “Gospel of Life.” In it, he quoted the Second Vatican Council: “Whatever is opposed to life itself, such as any type of murder, genocide, abortion, euthanasia, or willful self-destruction … whatever insults human dignity, such as subhuman living conditions, arbitrary imprisonment, deportation, slavery, prostitution, the selling of women and children; as well as disgraceful working conditions, where people are treated as mere instruments of gain rather than as free and responsible persons; all these things and others like them … poison human society, and they do more harm to those who practice them than to those who suffer from the injury. Moreover, they are a supreme dishonor to the Creator.”

And, yes, that quote includes deportation among its list of evils. To be pro-life is about more than opposing abortion. Don’t quote JPII to me without challenging the Democratic party and the nation on abortion when you are in the position to do so. Catholics and all our fellow Christians and people of faith must do better in the public square. It’s a matter of integrity and we owe it to the common good.

The Darkening of the Conscience

At the end of the aforementioned section of “Evangelium Vitae,” JPII writes: “not only is the fact of the destruction of so many human lives still to be born or in their final stage extremely grave and disturbing, but no less grave and disturbing is the fact that conscience itself, darkened as it were by such widespread conditioning, is finding it increasingly difficult to distinguish between good and evil in what concerns the basic value of human life.” See how that’s where we are today? We need to stop hiding behind euphemisms and bombast.

Pope John Paul II’s words are a road to healing and renewal. They show why faith is important to politics — to call us to our better angels, not to make God a campaign slogan.