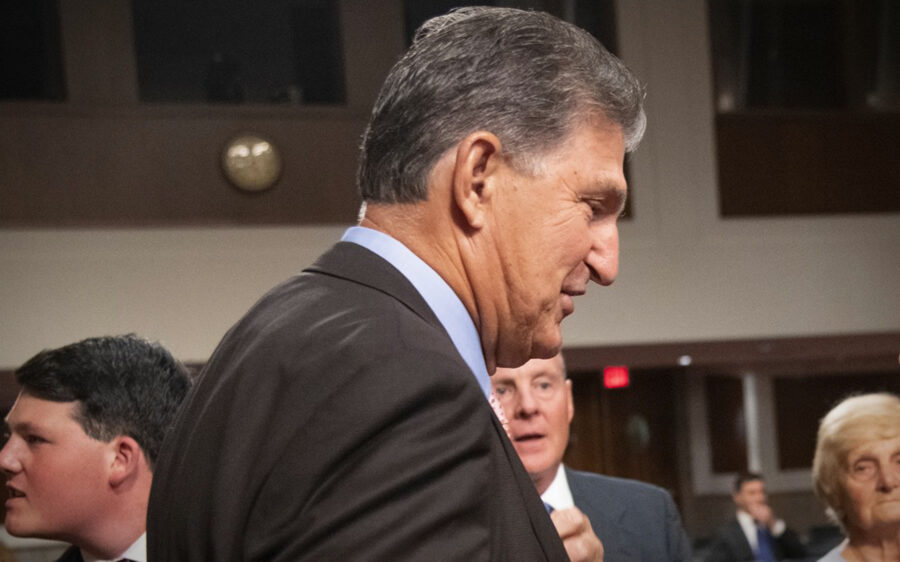 In perhaps the biggest story, West Virginia Sen. Joe Manchin has announced he won’t vote for the so-called “For The People Act,” which we call the “Legalize Vote Fraud Act.” He rightly says that forcing it through by way of the partisan reconciliation process will further divide the country. And he’s right — if anything could, this is it. The bill runs over 800 pages and, for good reason, has zero GOP support.

Manchin also said he won’t vote to weaken or eliminate the filibuster. His reasoning is consistent: it would have given total power to one party that has only a tiny edge in votes.

Thank you, Sen. Manchin, for standing up for bipartisanship and elections that reflect the will of the people. You’ve said you don’t want either party — even your own — to have absolute power, and we applaud you for that.

Here’s what Sen. Manchin said in his home state newspaper, the Charleston Gazette-Mail.

“Do we really want to live in an America where one party can dictate and demand anything it wants, whenever it wants?” Manchin wrote. (Note: most Democrat politicians would answer YES!) “I have always said, ‘If I can’t go home and explain it, I can’t vote for it.’ And I cannot explain strictly partisan election reform or blowing up the Senate rules to expedite one party’s agenda.”

“For as long as I have the privilege of being your US senator,” he continued, “I will fight to represent the people of West Virginia, to seek bipartisan compromise no matter how difficult, and to develop the political bonds that end divisions and help unite the country we love.”

Amen. And thanks, West Virginians, for making your feelings known about this. I would also add that this bill, by federalizing elections when the Constitution leaves elections to the states, is blatantly unconstitutional.

Election Reform is in the Eye of the Beholder

Mollie Hemingway, whose book about the 2020 election is due out in September, appeared on Sunday Morning Futures with Maria Bartiromo to talk about what we know so far.

She noted something former President Obama said last week: that in our focus on election reform, Republicans are trying to “rig” the elections going forward. (Once again, accuse us of what YOU are doing.) I would characterize what he said as not just wrong but downright offensive.

Obama was speaking at The Economic Club of Chicago when he spoke in sharp condemnation of the voting reform laws passed in Georgia and Florida and under consideration in Texas and other states. Here’s a strong opinion piece in The Western Journal about Obama’s presentation, including the video. Read on in the article to see what Texas Attorney General Ken Paxton said about the risk posed to Texas by the push to send out mail-in ballots to every registered voter currently on the rolls.

Censure of Georgia Secretary of State

By the way, Republicans in the Georgia House have gone further than passing election reform. They’ve also approved a resolution censuring Secretary of State Brad Raffensperger, saying that he failed to perform his duties “in accordance with the laws of the Constitution of the State of Georgia.” The document itself makes good reading.

According to this document, Raffensperger’s failure stems from the settlement agreement he entered into with the Democratic Party of Georgia, the Democratic Senatorial Campaign Committee, and the Democratic Congressional Campaign Committee. Republicans accused him of “undermining the security of our elections by allowing mass mailings of absentee applications by his office and third parties [!] which created opportunities for fraud and overwhelmed election offices; rendering accurate signature matching nearly impossible; allowing ballot drop boxes without proper chain of custody; and ignoring sworn affidavits and disregarding evidence of voter fraud.”

Details are in this Epoch Times premium story.

If you’re really into the 2020 statistical anomalies suggestive of election fraud, we recommend this piece from Revolver about what appears to have happened in Montgomery County, Pennsylvania. (And no, it doesn’t make us “conspiracy theorists” to want to examine this.) Former President Trump is calling for a Maricopa-style election audit in Pennsylvania, saying the vote was rigged. There should be one.

As Mollie Hemingway said, tens of millions of Americans saw the election as rigged “when laws were changed about how to control and protect our elections, or, sometimes…the courts just intervened or rogue election officials changed the processes by which we make sure that ballots are correct and should be counted.” Indeed, attorney Marc Elias of the law firm Perkins Coie (the firm that paid Fusion GPS for the Steele “dossier”) might very well be the one individual most responsible for the outcome of the 2020 election, just by traveling around the country and getting states to ignore their own laws, the Constitution be damned. It all made cheating easier, regardless of whether or not the machines got hacked.

Hemingway also noted the practice by Big Tech companies of shoveling outside money to county election officials, essentially “privatizing our election process.” The biggest example of this that we know of is the Center for Tech and Civic Life (CTCL), which received hundreds of millions of dollars from Facebook founder Mark Zuckerberg. This money had strings attached; for example, money that went to counties in Wisconsin paid for unsupervised drop boxes in locations determined by … CTCL.

Bartiromo recalled the various locations on Election Night where counts were abruptly stopped and picked up again in the morning. Of course, the most infamous of these, at which a skeleton crew of election tabulators continued counting into the night, unobserved, after the building had been evacuated because of a nonexistent burst pipe, was in Fulton County, Georgia, at the State Farm Arena in Atlanta.

“The whole problem with absentee voting and mail-in balloting is that we don’t even know how many ballots are out there,” Hemingway said. “This is a big concern for people who care about election fraud, ‘cause you need to be able to trust elections to have a republic.’” And we can’t.

Moving on…the Maricopa audit is working at a good pace, with 60 percent of the ballots counted so far. But as the Arizona GOP tweeted Friday, “Democrats aren’t just trying to stop the audit, they are using it to raise millions of dollars from Big Tech and Corporate Cronies, grab power, finance campaigns, and further their anti-American agenda.” Well, of course they are.

A Huge Take-Away Thanks to Mike Lindell

Finally, Mike Lindell hasn’t backed down one iota — that means “infinitesimal amount” — on his claims of fraud. We had to go looking for his most recent video and finally found, on his own website, a choice edit that deals with his latest findings. I’ll tell you, it’s much easier to find the so-called “debunkings” (which aren’t) than it is to find the videos themselves. And once you see this, you’ll be wary of how simple it might be for China to hack into voting machines. The huge take-away is that to have secure elections, we have to go back to old-school paper-and-pen ballots. Stop electronic voting NOW.