WWII Paratrooper Veteran Jumps Out of Helicopter to Honor Veterans 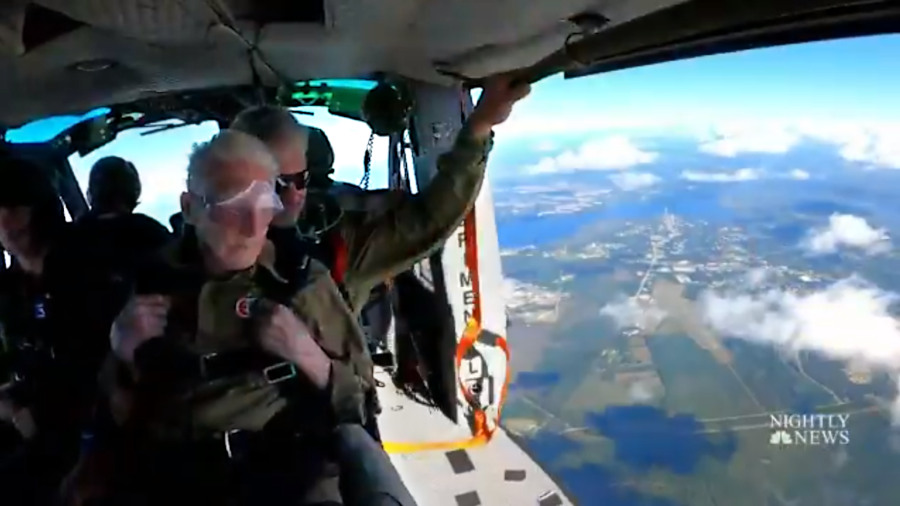 Jim “Pee Wee” Martin parachutes to commemorate veterans and was part of a paratroopers regiment in World War II, according to an NBC News video.

“You stand in a door. You may have a little, little apprehension, but no fear. No fear at all,” Martin said.

The Huey helicopter Martin jumped out of is the same type his late son used in Vietnam, according to the NBC video.

“And how do I feel about my personal service? I’m proud of what I did and our people are proud of it, but we don’t go around and talk about it. It’s not necessary,” Martin said, according to the video.

WATCH: Jim “Pee Wee” Martin, a paratrooper who helped liberate France during World War II, made a recent jump at 99 years old to honor other veterans. @kevtibs has the story. pic.twitter.com/HkW5U2XSXO

Veteran Jim "Pee Wee" Martin, a paratrooper in World War II, is still leaping into action at 99 years old. Coming up, @KevTibs shares the story of Jim's recent jump, his service and his new fight.

Martin also mentioned COVID-19 to NBC and encouraged others to wear masks. “Protect each other. And that starts with wearing a mask,” Martin said in the video.