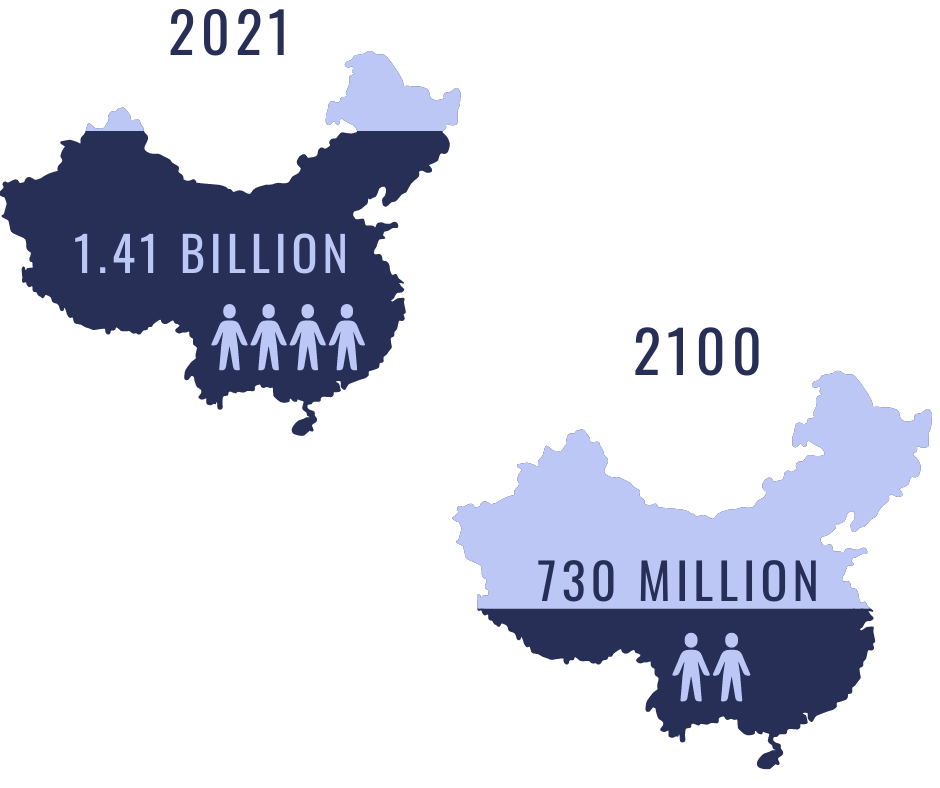 The Wall Street Journal reports that the number of newborns in China fell to an historic low last year, despite the government’s emphasis on raising the fertility rate.

Last year, China recorded 10.62 million births, down from 12.02 million in 2020. Births barely exceeded the number of deaths (10.14 million). Feder remarked, “Sometime in the next few years, China’s population will start to fall. Once that happens, descent could become rapid.”

Replacement fertility is 2.1. In 2020, China’s fertility rate was 1.3, one of the lowest in the world. Feder warned, “Demographers say that once a nation’s total fertility rate goes below 1.3, recovery is impossible.”

He further noted: “The proportion of China’s population over 60 is now 18.9%. That’s expected to more than double to 39% by 2050. What will the People’s Republic do when pensions for the elderly exceed taxes paid by workers? The nation is already experiencing a labor shortage.”

The regime is trying to address this by such policies as making it harder to get a vasectomy. Some hospitals refuse to perform the procedure unless the patient can prove he’s married and has children.

Local governments have offered longer maternity leaves and are organizing matchmaking events. The latter will be hampered by the fact that, due to decades of the one-child policy and the traditional Chinese preference for male children, among 20-to 40-year-olds, men now outnumber women by 17.5 million.

Feder observed, “Beijing crippled its birthrate with its hideous one-child policy. But every industrialized nation is grappling with falling fertility. Elderly populations are rising while the number of young workers is falling. Who will do society’s vital work in a nation where fewer and fewer are born each year?”

Without Life Nothing Matters

Rev. Walter Hoye received the Public Witness of the Year award at the 2021 Ruth Institute Summit for Survivors of the Sexual Revolution. Rev. Hoye made news when an abortuary in Oakland, California, pressured legislatures to change the law, enabling them to have Rev. Hoye arrested for his successful sidewalk counseling outside their clinic.
Watch to see Rev. Hoye’s story, and listen as he speaks on the impending irreversible decline of the African American community. African American women of childbearing age make up 3% of the population, yet they account for 37% of abortions in the US. They are aborting themselves into extinction, Rev. Hoye says.

“It doesn’t matter if you have a family, a Ph.D., or a job waiting for you if you can’t get out of the womb,” Hoye says. “Without life, nothing matters.”

“The Biblical model for a man and a woman is the model we need to embrace. We need to get back to a point where a man marries a woman, provides for, and protects her. Then they raise their children in their family. When we get back to that, we’ll solve the problem.” Watch it here.

Surrogacy is Exploitative and Narcissistic

“With this we heartily agree,” said Dr. Jennifer Roback Morse.

Nasreen, who describes herself as an “author, secular humanist, feminist, human rights defender, and physician,” criticized Hollywood power couple Nick Jonas and Priyanka Chopra (both singer / songwriters) who recently announced their new baby via surrogate. They did not specify the child’s genetic identity.

Nasreen asked: “How do these mothers feel when they get their ready-made babies through surrogacy? Do they have the same feelings for the babies like the mothers who gave birth to the babies?”

“Surrogacy is possible because there are poor women” who will carry the burden of pregnancy and childbirth for the rich, Nasreen continued, calling this method “selfish” and “narcissistic.”

Morse added, “The Ruth Institute has been saying this for years. We unconditionally oppose surrogacy, whether done by same-sex or opposite-sex couples, regardless of the status of the surrogate: family friend or total stranger whose womb is for hire.”

The multi-million-dollar surrogacy industry is fraught with peril and largely unregulated. Many people uncritically accept the images of happy couples holding a ‘little stranger,’ literally. Such people don’t consider the consequences of separating the ‘genetic mother,’ meaning the woman whose egg was used, the ‘gestational mother’ who carries the child to term, and the legally recognized mother, who is generally the celebrity holding the baby in the photos.

Once the surrogate child is born and ‘delivered’ to the commissioning parents, the natural attachment between mother and child is severed forever. Someday, the child may live with the knowledge that he was conceived and carried to term as a favor or for money, what you might call a rent-a-womb arrangement.

Nasreen tweeted, “If you want to raise a child, adopt a homeless one.”

Morse agrees. “The human person was meant for love. God loves every single person ever conceived by any method. But God’s will for humanity is that we cooperate with His love in bringing new life into the world. At the Ruth Institute, we believe it is no accident that human beings come into existence as the result of the marital embrace between the mother and father. To deny a child an uninterrupted relationship with the mother who both conceived and carried him or her, is to deny the child’s birthright, literally.”

In honor of Black History Month, The Ruth Institute is featuring interviews with African American leaders on The Dr. J Show. The latest guest is Bishop Joseph N. Perry of Chicago, who is promoting the cause of canonization (sainthood) for Venerable Augustus Tolton, the first black Catholic priest in the U.S.

Bishop Perry begins by sharing the harrowing story of Tolton’s mother escaping slavery with nine-year-old Tolton and his two younger siblings (one a baby), while Confederate bounty hunters shot at them. After gaining freedom, the pursuit of an education as a black person was Tolton’s next challenge. Eventually he succeeded and later joined a seminary. Being a black priest in America, however, brought new crosses upon him.

Watch to learn this virtually unknown potential future saint’s story, as well as the process by which someone is declared a saint. Then hear Bishop Perry’s advice to people in our day and age on what we can learn about a life of virtue from Ven. Tolton.