The Untold Story of Prophecy and the 2020 Election: A Praying But Not Religious President, Dark Veil Over America, SCOTUS, Impeachment — and More 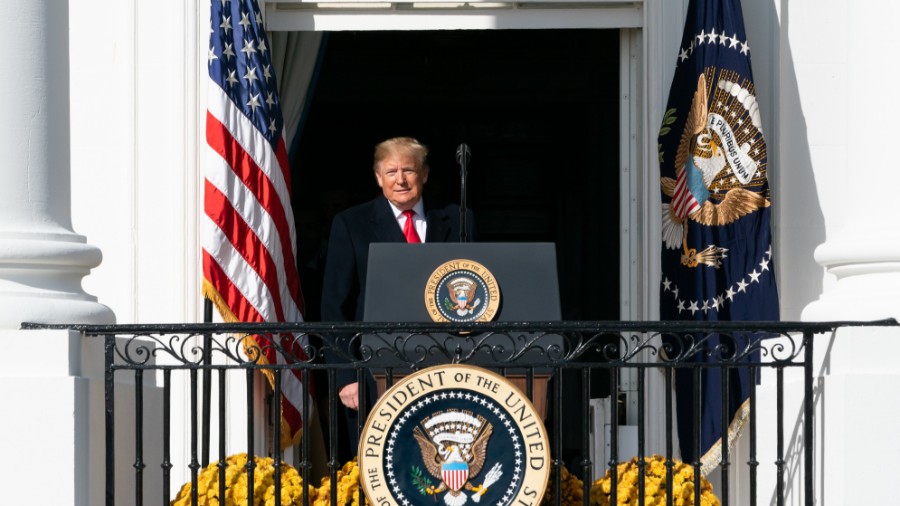 As we approach the 2020 election, and with impeachment news daily in the headlines, there are Christian leaders who prophesy that Donald Trump will indeed win. It is an untold story of prophecies and spiritual signs that is off the radar screen of the secular media, which would never cover it except to ridicule. Yet many Christians believe God still actively guides us not only through the Bible, but through the Holy Spirit and spiritual gifts.

Most Americans are aware that our nation is deeply divided, and the campaign season for the 2020 election is bringing that to light as never before. Most pundits would say it’s between conservatives and liberals or maybe against progressive leftists and constitutional conservatives on the right. But all see it in academic or secular terms.

Should We Believe Modern-Day Prophets?

Many Christians believe in the existence of modern-day prophets — people with a spiritual gift enabling them to tell others what God is saying. Therefore, it’s no surprise that when various prophets have said God has raised up Donald Trump, many believe it’s true. Could God be speaking to us today, and does He still have plans and purposes for America?

Because I know many of these prophets and have reported on them and what they say from the Lord, I have tried to document them in various ways, including the books I’ve written. I understand the reasons that some might be skeptical or totally disagree. For one, some prophecies are obscure or mostly symbolic.

Add to this that the prophets sometimes seem to be wrong, and that prophecies given in earlier times just weren’t documented unless written down at the time.

The number of prophecies about Donald Trump, many of which have gone viral, is one of the reasons Trump received so much support from the Christian community, especially charismatics and Pentecostals.

I believe we can overcome these concerns, in part because of modern electronics and the fact so many church services where prophetic words are given are now recorded and available online. This gives us a chance to evaluate them after the fact and to try to understand what’s happening from a spiritual perspective. I believe there is a spiritual significance for the tumultuous times in which we live, because there were several prophecies spanning several years. And, they came true!

The number of prophecies about Donald Trump, many of which have gone viral, is one of the reasons Trump received so much support from the Christian community, especially charismatics and Pentecostals. Not only is Trump a champion of religious freedom who is keeping his promises, but there is also a sense that somehow, some way, God is behind this unlikely builder from Queens.

“A President That Will Pray”

One of the most talked about prophecies on YouTube, viewed by more than 1.2 million people (yet virtually ignored by the media) is by the late Kim Clement. In 2007, he prophesied in a service in Redding, California, that “Trump shall be a Trumpet,” and even more startling: “God says, I will put at your helm for two terms a president that will pray.”

Other than the mention of the Trumpet, there is no specific mention of Donald Trump. Only in hindsight have people latched on to this video as a prophecy about Trump and passed it around.

I first met Kim Clement in the late 1990s so I knew his story. He moved to America from South Africa where he had been trained to be a classical pianist and later played in a rock band. When he nearly overdosed on heroin, that crisis caused him to become a Christian in 1974. Gradually as he grew in his faith and ministry, he developed a reputation as a seer, a prophet. In charismatic worship services he would often accompany himself on the keyboards and sing or preach his prophecies. (Unless you were raised a Pentecostal, this form or worship may seem odd.) A sort of mystic, Clement would often shake his head of long dark hair as he spoke or sang.

This resulted in a very heavy “atmosphere” in the service — almost mystical — and most people in the room seemed to believe that God really was speaking through Clement.

In Redding in 2007, Clement also prophesied: “There will be a praying president, not a religious one. For I will fool the people, says the Lord. I will fool the people. Yes, I will. God says. The One that is chosen shall go in and they shall say, ‘He has hot blood.’ For the Spirit of God says, yes, he may have hot blood, but he will bring the walls of protection on this country in a greater way and the economy of this country shall change rapidly, says the Lord of hosts.”

Only in hindsight can we notice what he said about Trump having “hot blood” or that he would build walls of protection or help the economy boom. But most interestingly of all is that he said, “Listen to the Word of the Lord, God says, I will put at your helm for two terms a president that will pray, but he will not be a praying president when he starts.”

A Man After God’s Own Heart

Seven years later, on February 22, 2014, more than a year before Trump announced he would run for president, Clement prophesied that God had allowed a veil to be put on this nation “for in darkness, faith grows.” He went on to say he found a man after his own heart like King David who would be singled out for the presidency of the United States. Clement continued: “I have searched for a man … who would stand in the Oval Office and pray for the restoration of the fortunes of Zion (Israel).”

For many conservative Christians who feel their nation is deteriorating before their eyes, such words bring hope. Even if they don’t know whether to believe, they want to.

“They will shout, ‘Impeach, impeach!’ but this will not happen.”

Then he asks rhetorically, “Why is God doing this? For God said, “I am dissatisfied with what emerges from both parties.”

“And then there is a nation He showed me, He took me, itching for a new kind of war with America. They will shout, “Impeach, impeach,” they say. But nay. This nation shall come very suddenly, but it shall not come in the time of President Obama. It shall come when this new one arises. My David, that I have set aside for this nation … They will shout, ‘Impeach, impeach!’ but this will not happen.

“God says, ‘Once you recognize the man that I have raised up, pray. For the enemy will do everything in its power to put a witch in the White House.’ For Jezebel has chased away the prophets and even Elijah. Now I have said, ‘Go back.’ For this shall be dismantled so that there will be no more corruption in the White House,” says the Spirit.

For those who are wondering, Kim suffered a stroke in 2015 and passed away in November 2016, the same month Trump was elected. So there is no way someone could have recorded him saying these things after they played out during Trump’s presidency and post-dated it to look like he said them in advance. Both prophetic words were given before Trump had even announced he was running for office.

Clement said more, and not all of it has come to pass. But to me it’s interesting that between these two prophecies he touched on most of the significant issues at stake during Trump’s presidency, and he uttered specific words about Trump that have come true.

Stephen E. Strang is an award-winning journalist, founder and CEO of Charisma Media and author of the best-seller “God and Donald Trump.” This content was excerpted from his new book, “God, Trump, and the 2020 Election,” out Jan. 14.