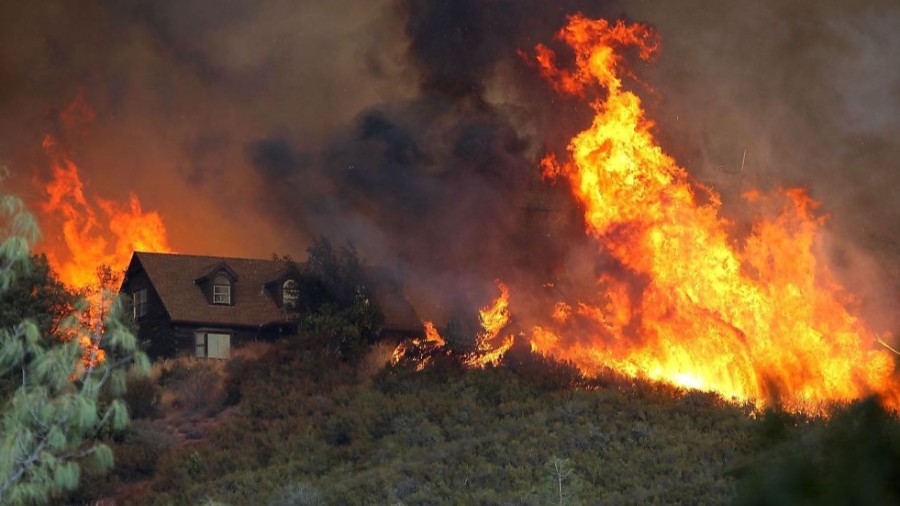 A wildfire in California's Lake County surrounds a house, June 6, 2017.

Former President Bill Clinton made a significant change to federal land management nearly 30 years ago that created the conditions necessary for massive wildfires to consume portions of the West Coast, according to one fire expert who predicted the problem years ago.

Shortly before leaving office in 2001, Clinton limited the ability of the United States Forest Service to thin out a dense thicket of foliage and downed trees on federal land to bring the West into a pristine state, Bob Zybach, an experienced forester with a PhD in environmental science, told the Daily Caller News Foundation. The former president’s decision created a ticking time bomb, Zybach argues.

“If you don’t start managing these forests, then they are going to start burning up. Thirty years later, they are still ignoring it,” said Zybach, who spent more than 20 years as a reforestation contractor. He was referring to warnings he made years ago, telling officials that warding off prescribed burns in Oregon and California creates kindling that fuels fires.

Such rules make it more difficult to deploy prescribed burns, which are controlled burns designed to cull all of the underbrush in forests to lessen the chance of massive fires, Zybach noted. Years of keeping these areas in their natural state result in dead trees and dried organic material settling on the forest floor, which become like matchsticks soaked in jet fuel during dry seasons, he said.

Zybach’s comments come as wildfires continue churning through parts of California, Oregon, and Washington, media reports show. Fires have killed 26 people in West Coast states since August, including 19 people in California, and have culminated in more than half-a-million people evacuating Oregon, a number representing roughly 10% of the state’s overall population.

Roughly 100 massive fires are blazing Saturday in the West, including 12 in Idaho and nine in Montana, the National Interagency Fire Center said Saturday. All told, the wildfires have churned through more than 4.5 million acres in 12 states.

Shortly before leaving office, Clinton introduced the Roadless Rule that restricted the use of existing roads and construction of new roads on 49 million acres of National Forest, making it difficult for officials to scan the land for the kind of kindling that fuels massive conflagrations.

The move was part of the Northwest Forest Plan (NWFP), a resolution adopted by Clinton in 1994 to protect forests from being over-logged.

Ten years before Clinton’s rule, the Fish and Wildlife Service placed the northern spotted owl on the Endangered Species Act, forcing the Forest Service to adopt a new policy that resulted in a greater reduction in timber harvests. The amount of timber removed from federal lands plummeted, according to data accumulated in 2015 by the Reason Foundation.

“They’ve gone and left hundreds of thousands of acres of burnt timber, a fire bomb waiting to happen, standing in place because the black back woodpecker prefers that habitat,” Zybach said. “It’s great for lawyers, but it’s bad for people who breathe air or work in the woods.”

“The prescribed burns are an ancient form of management for keeping the fuels down so these events don’t happen,” Zybach added, referring to Native American Indians who used controlled burns to ward away pests and prevent wildfires from licking their homes.

The Clinton administration’s plan to turn forests in the West into pristine land free of human interference risked fueling “wildfires reminiscent of the Tillamook burn, the 1910 fires and the Yellowstone fire,” Zybach, who is based in Oregon, told Evergreen magazine in 1994, when the NWFP came into effect.

Western Oregon had one major fire above 10,000 acres between 1952 and 1987, reports show. The Silver Complex Fire of 1987 snapped that streak after torching more than 100,000 acres in the Kalmiopsis Wilderness area, killing rare plants and trees the federal government sought to protect from human activities.

Overzealous fire suppression across California are helping to build up wildland fuels, which contribute to wildfires, according to Tim Ingalsbee, a fire ecologist who began a career in the 1980s as a wildland firefighter. The solution is “to get good fire on the ground and whittle down some of that fuel load,” he told ProPublica in August.

“It’s just … well … it’s horrible. Horrible to see this happening when the science is so clear and has been clear for years. I suffer from Cassandra syndrome,” Ingalsbee said, referring to a Greek metaphor people use when they believe their valid warnings are not heeded.

“Every year I warn people: Disaster’s coming. We got to change. And no one listens. And then it happens.”

Other experts have made similar arguments in the past.

Overgrown grasslands, forests, and woodlands contributed to California wildfires in 2017, Sasha Berleman, a fire ecologist, told High Country News that year. “I’m more certain than ever that there’s a lot we can do between now and the next time this happens to make it so that the negative consequences to people are nowhere near as dramatic,” she said.

The solution might be easier said than done. Nearly 20 million acres in California, or an area about the size of Maine, will need to experience controlled burns to limit catastrophic wildfires, a January study from Nature Sustainability found.

Former President Barack Obama suggested in a tweet Thursday that California’s wildfires are a result of climate change.

“The fires across the West Coast are just the latest examples of the very real ways our changing climate is changing our communities,” Obama wrote in a tweet that included pictures showing how soot and ash from the wildfires are turning San Francisco’s sky bright orange.

Obama isn’t the only prominent Democrat tying the fires to global warming.

Senate Minority Leader Chuck Schumer, a Democrat from New York, published a tweet Saturday that read: “The proof of the urgency of the climate crisis is literally in the air around us.” Schumer included a link to a Sept. 10 article from CBS blaming climate change for the fires.

Zybach is not convinced. “The lack of active land management is almost 100 percent the cause,” he told the DCNF, noting that climate change has almost nothing to do with fire kindling gathering across the forest floors. Other researchers share his skepticism.

“Global warming may contribute slightly, but the key factors are mismanaged forests, years of fire suppression, increased population, people living where they should not, invasive flammable species, and the fact that California has always had fire,” University of Washington climate scientist Cliff Mass told the DCNF in 2018.

Mass’s critique came as Mendocino Complex Fire was spreading across California on its way to becoming the largest wildfire in the state, engulfing more than 283,000 acres.

First You Deny, Then You Gloat: Andrew Cuomo and the Radical Playbook