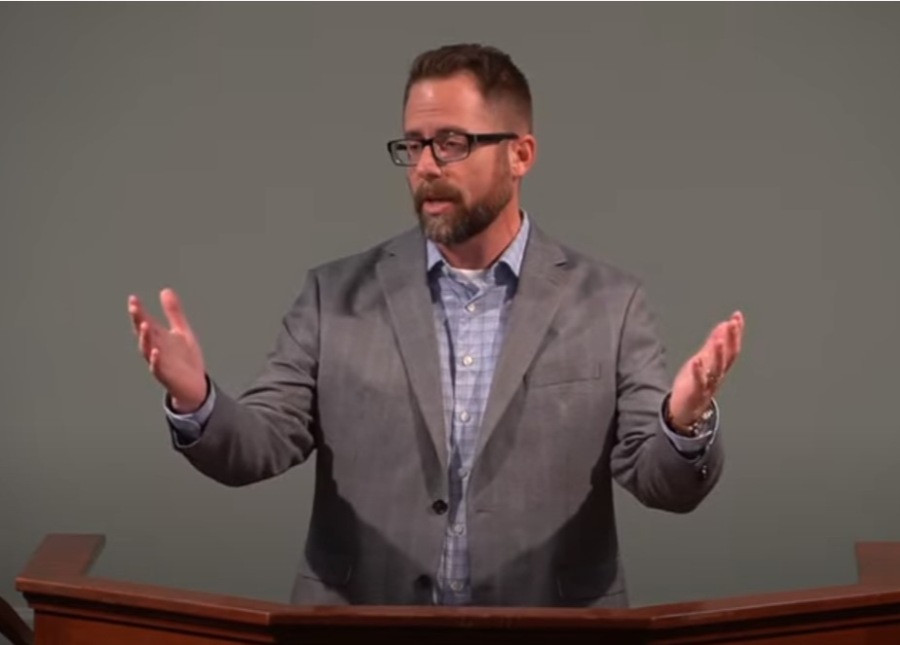 His church building in Sacramento is little more than a mile from the California State Capitol, where stringent COVID-19 restrictions originate, so the Rev. Steve Meister easily could make it there and back on his lunch break.

Meister, a Bay Area native and lifelong California resident, has lived in various regions of the state but has called Sacramento home for 12 years, since he became a pastor at Immanuel Baptist Church.

But like many other Californians, and especially fellow Christians, Meister has struggled with the restrictions placed by Gov. Gavin Newsom on ordinary life during the pandemic.

Before Newsom, a Democrat, ordered believers to stop gathering in churches and other places of worship, Immanuel Baptist Church assembled in various ways: morning and evening Sunday services, midweek prayer, kids’ club, small groups, and other classes and meetings.

About 350 to 400 worshipers typically congregated Sundays pre-pandemic, but Newsom’s restrictions meant Immanuel Baptist had to reorganize itself into about 20 “care groups” and forsake larger, in-person gatherings for livestreamed teaching and services.

“As things wore on and uncertainty over COVID-19 became greater understanding of the real nature of the risk, we became increasingly aware of the effects of the isolation,” Meister, 41, told The Daily Signal in an email interview. “Mental health crises, marital and familial breakdown, addictive behaviors, among many other effects.”

Meister and his wife Jenn, married 18 years, have four children themselves.

Gathering outdoors about 20 miles outside the city on Sundays during warmer weather only partially countered the damage within the congregation, he recalls.

Immanuel Baptist met outdoors weekly until early December, when churches got some relief from the California Superior Court’s decision in the case of Father Trevor Burfitt v. Gavin Newsom. Meister’s congregation then returned to meeting indoors, in smaller gatherings.

Reclaiming the Right to Assemble

As the effects of the state restrictions on religious assembly compounded throughout 2020, Meister felt an obligation to his congregation to do something about it, to intervene with Newsom and advocate on their behalf.

“Neither Gov. Newsom nor any other state representative has the authority to dictate what is and what is not ‘essential’ to Christian worship. That prerogative belongs to Christ the Lord,” Meister told The Daily Signal.

After much deliberation, Meister concluded that the best path was to show Newsom that many of his constituents desired to reclaim their God-given right to assemble.

“As we have fully supported the purpose of our government to protect our community, we now write to ask that our state rescind its decision to ban indoor church services,” Meister wrote in a letter Jan. 4 to Newsom that also was signed by 40 other Christian leaders, 33 of them pastors, in the Sacramento area. “We believe this decision has and will ultimately harm our community.”

While livestreaming Bible teaching may have helped to ease some of the pain of isolation, [such steps] are not the worship of the church nor a substitute for it in any way. The church can only be said to worship when it’s assembled together as God’s people in God’s presence to hear God’s Word and to answer Him in prayer and praise. In a very important sense, as the church remains separated, it is not the church at all. Many activities of any church’s life can be canceled or altered to accommodate the circumstances of our day, but meeting together for worship is not one of them.

Our churches have been so aware of our need and obligation to meet for worship that we have successfully followed best practices to ensure our meetings present a very low risk of transmitting COVID-19. Even the director of Sacramento County’s Department of Health Services, Dr. Peter Beilenson, was reported as admitting, ‘Sacramento’s rising virus infection numbers have been due mainly to family gatherings in homes.’ …

Since church services present a very low risk of transmission of COVID-19, are the practice of long-standing and sincerely held religious belief, remain a legal right in the United States, and are essential to our community’s well-being, we respectfully request the state of California to recognize church gatherings as equal to other essential entities that remain open and to amend the current public health orders accordingly.

Meister estimates that the pastors who signed his letter, many of them fellow Baptists, represent about 6,000 members of churches in the Greater Sacramento Region, where COVID-19 has infected about 92,772 and killed about 1,456 in the past year.

A large part of maturing as a Christian is learning how to stand fast for Christ against the world without being standoffish to the community around you.

Meister and the other pastors express a deep-seated frustration with what they see as the hypocrisy and unscientific inconsistencies of Newsom’s COVID-19 guidelines.

“There is no data or scientific basis for many of the orders and policies, even by the state’s own admission,” Meister told The Daily Signal. “There is little explanation as to why people can crowd into different retailers, indoor malls, [and] spend hours on airplanes, but yet church gatherings are deemed risky. It is grievous.”

Newsom’s press office did not respond to The Daily Signal’s request for comment on the pastors’ letter, nor had his office responded to Meister after more than six weeks.

It is relatively rare for Christian pastors and ministers to engage in politics on this scale, and Meister is no exception.

“When earthly government appears to conflict with God’s commands, we are in the difficult place of sorting through all the biblical, legal, and prudential matters to proceed faithfully,” Meister said.

However, he added, “we recognize that it is the responsibility of the judicial branch to adjudicate such concerns.”

The Baptist pastor got his undergraduate degree in pre-law, but ended up going to seminary instead of law school after helping plant a new church while in college.

He says he views his decision to write Newsom about easing the COVID-19 restrictions as theological, not political.

“Even our letter is meant to be one small example of our living out the calling we have as pastors. We are giving witness to our governing leaders about the truth of God and the reality of things in our churches, for [those leaders] are accountable to God to serve for the public’s good,” Meister said, citing Romans 13:1-7.

In it, the nine justices held that churches may reopen for in-person gatherings but that California may limit attendance to 25% of capacity and enforce bans on singing and chanting.

Justices Neil Gorsuch, Clarence Thomas, and Samuel Alito argued for no restrictions on gatherings at houses of worship, noting that California’s mandates were harsher for churches than for liquor stores, dispensaries, and strip clubs.

Although the high court’s ruling was good news for churchgoers, it doesn’t do much to alleviate faith leaders’ concerns about government hypocrisy regarding different types of gatherings, Meister said:

In general, I’d say that I heartily agree with Justice Gorsuch’s remark [in the high court’s 5-4 ruling Nov. 25 against New York Gov. Andrew Cuomo’s restrictions:] ‘Who knew public health would so perfectly align with secular convenience?’ That is precisely the prejudice we are experiencing and that is flagrantly displayed by the state of California.

A glaring example, the pastor said in his email to The Daily Signal, is the governor’s tolerance even for violent protests against police last summer:

Gov. Newsom, publicly and on record, stated that one First Amendment right, that of free speech and assembly, is ‘profound and pronounced,’ and therefore to be allowed — even contravening his orders from his own office — but the other First Amendment right, to religious assembly, is not. I’m not sure how else to view this other than [as] blatant viewpoint discrimination, granting preference based on the ideology of the group [and] not the protected liberty, which he has sworn to uphold.

It is not yet clear what Newsom’s next steps are in reopening his state as more Californians are vaccinated against COVID-19.

As California continues to lag well behind in the rollout of two COVID-19 vaccines, Meister told The Daily Signal that he remains hopeful that Newsom and other state politicians will heed the concerns he and the other pastors communicated.

Copies of their letter went to nine state legislators and bureaucrats representing the Sacramento area.

“We are still praying that our leaders, both [at] the state and local levels, will take seriously these considerations and amend the orders and any enforcement accordingly,” Meister told The Daily Signal. “As for now, as the weather warms and we are still not able to gather our congregation in full capacity indoors, we are considering a return to outdoor services in the near future.”

“Above all,” the pastor added, “we are waiting on the Lord and trusting him with all that is before us.”

Blayne Clegg-Swan is a member of the Young Leaders Program at The Heritage Foundation.