Why the Media’s Portrayal of Carbon Dioxide is Often Wrong

News outlets and the Obama administration should stop misleading the public about what carbon dioxide really is — a harmless, nontoxic gas. 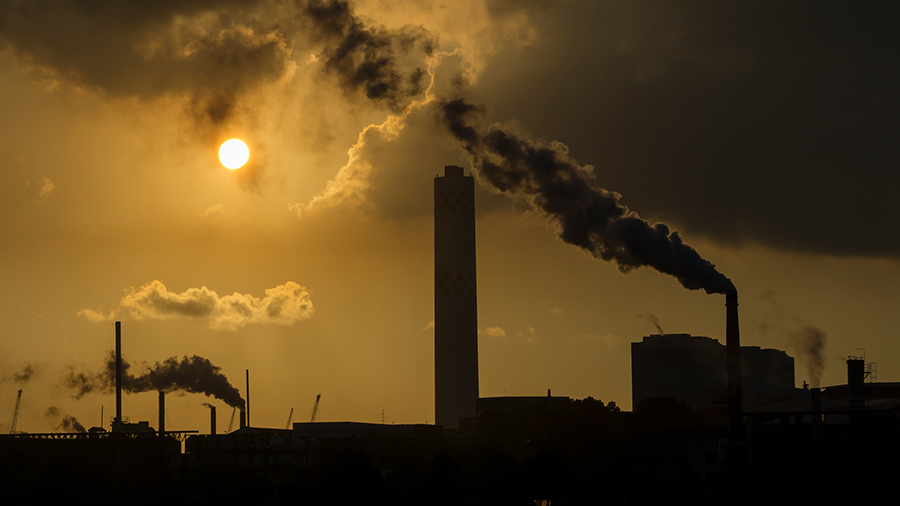 The media is helping governments wage an all-out war on carbon dioxide while distorting the truth about the colorless gas. This blitz could come with considerable costs for Americans with negligible benefits, at most.

Over the weekend, the United States official joined the Paris Protocol to combat manmade global warming while President Obama was in China. The South China Morning Post was first to report story earlier last week. The news outlet, however, was not the first to misrepresent carbon dioxide as a harmful pollutant.

The picture used by the South China Morning Post illustrates a problem with how the media portrays carbon dioxide emissions generally. If you click on the link, the news story will show a picture of factories spewing out nasty, harmful black smoke. The caption of the photo from Reuters is: “Smoke billows from chimneys at a chemical factory in Hefei, Anhui province.”

But the entire story is about reducing carbon dioxide emissions and combatting man-made global warming. Carbon dioxide is a colorless, odorless, nontoxic gas. We exhale it. Carbon dioxide is a necessary component for photosynthesis and the growth of green vegetation. The reason behind the regulatory agenda to close existing coal-fired power plants in the United States and push for an international crusade against conventional fuels is because of carbon dioxide’s alleged impact on the climate.

The South China Morning Post is hardly the first to inaccurately portray carbon dioxide emissions. Australia’s Eco News reporting on China being poorly prepared for climate change plasters a large photo of cyclists peddling in a sea of smog with face masks. Time posts an aerial shot of a thick smog settling over Beijing in its story. The federal government has done its fair share of deceiving too, through its messaging.

Rarely do you hear the words “global warming” out of President Barack Obama’s mouth. Even “climate change” is less frequent in speeches, unless it’s to facetiously tell the “flat-earth society” that climate change is real.

We all know the climate changes. The debate, which is very much open, is how fast the climate is changing, why it’s changing, and what is man’s impact.

For some time, the message from the White House evolved to “carbon pollution” to convey the very image the media uses — carbon dioxide has harmful, dirty pollutants.

China, without a doubt, has serious air and water quality problems. But people aren’t wearing masks in China because they’re worried about carbon dioxide. If there’s a pressing environmental issue Obama should be addressing while on his final Asia tour, it’s reducing the real pollutants like smog that we know have adverse health impacts.

These are environmental issues the United States has addressed. Through individual choice, regulation, and technological innovation, and having the wealth to address environmental concerns, the U.S. has largely addressed pollutants like black carbon and smog.

For instance, the increased stringency of the Obama administration’s new ozone standard and mercury air and toxics standard has exorbitant compliance costs passed onto the consumer and very little, if any, direct environmental benefit.

Global warming regulations have similarly high costs for no meaningful impact on global temperatures. The Paris agreement will curtail the use of conventional fuels like coal, oil, and natural gas and increase energy costs for developing countries. Furthermore, it will prohibit access to affordable electricity for countries that have yet to reliably flip a light switch on and off.

So, if you want to look at some pictures, look at ones where global warming policies will prevent better standards of living. Look at the group of boys studying by lantern in Chowkipur, India, as they are just a few of the 1.3 billion people without access to electricity. Look at the images of North Korea and South Korea at night. South Koreans use 10,162 kilowatt hours (kWh) of power per person in a year. Energy-poor North Koreans each use a paltry 739 kWh.  The poorest in the world are those most harmed by global warming policies.

To make matters worse,  the developed and developing world will be making economic sacrifices to maybe reduce the earth’s temperature a few tenths of a degree Celsius over the next 80 years.

As a colorless gas, it’s not easy to show a picture of carbon dioxide. A smokestack with nothing emitted from it, or even with water vapor, doesn’t have the same fear-mongering feel to it. But instead of taking deceptive and salacious shortcuts, news outlets and the Obama administration alike should stop misleading the public about what carbon dioxide really is.