(It's not just because Trump nominated her.) 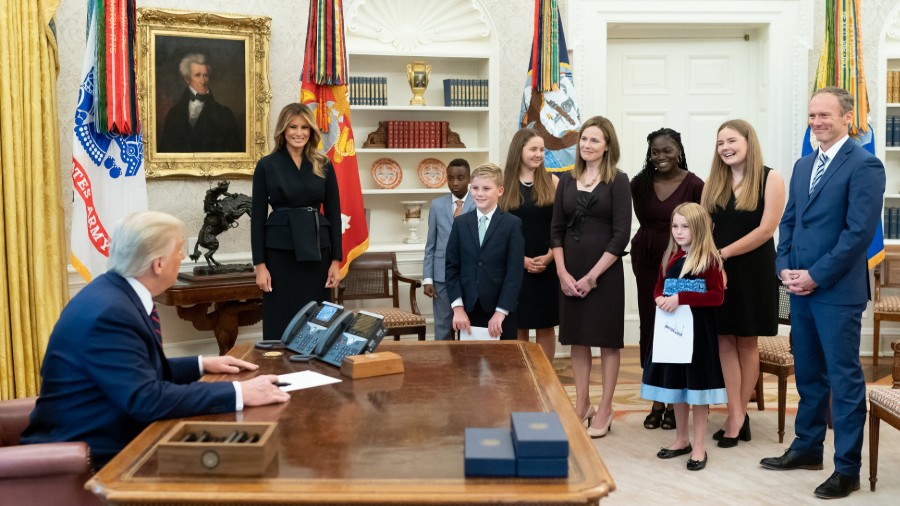 In a Sane World, suggests Kathryn Jean Lopez, America Would Have Just Fallen in Love with the Barrett Family.

After all, Amy Coney Barrett’s scholarly brilliance is recognized by legal minds on both the left and the right. Plus, she’s the mom of seven children, including two that were adopted from Haiti. Her youngest child, who has Down Syndrome, is the favorite of everyone in the family, she revealed in a truth said in jest when she accepted her nomination.

What’s Not to Love?

It’s a good question, even for those on the other side of the political aisle. Barrett is, after all, literal proof that women really “can have it all,” a line that, apparently, more people say than actually believe. As NPR’s Nina Totenberg admitted in a recent profile, “Barrett’s busy schedule and her many roles leave people … scratching their heads and asking, ‘How does she do it?’”

Critiques of Barrett have, so far, run the gamut. Some are understandable, such as the complaints about how this process is proceeding in an election year or the questions rooted in fundamental disagreements about judicial philosophy.

Other critiques have been uncharitable, even evil. For example, a tweet issued over the weekend suggested that adopting children from Haiti could mean that the Barrett family are white-supremacist colonizers.

The stupidest critique award goes to the person who suggested that a religious group Barrett was connected to was the inspiration for Margaret Atwood’s The Handmaid’s Tale. Turns out, it wasn’t. Though, to be clear, this falls under the category of “irrelevant and pointless even if true.”

And, some critiques reflect a straightforward anti-religious bigotry, as if Catholics who believe what Catholics have always believed are somehow disqualified from public service. The irony of these critiques is that they are often coming from the same voices who’ve spent the last four years telling Christians they weren’t Christian enough. It’s hard to keep up.

Trace the Hatred Back to Roe v. Wade

At root, there’s more to this hatred than the legitimate disagreements and debate inherent to the nomination process. There’s even more to it than being potentially the third appointee of a President despised by so many. The savage incivility already being directed at Barrett can be traced back to Roe v. Wade. As Kim Colby, legal scholar for Christian Legal Society suggested last week on the BreakPoint podcast, the decision to legalize abortion has poisoned our political system and escalated court nominations to literal life and death issues.

Like the horrible Dred Scott decision on slavery, Roe deals with the very heart of what it means to be human. And, just as in the Dred Scott decision, the Court got Roe wrong. More than 160 years later, America is still paying the price for the Court getting Dred Scott wrong. In the case of Roe, the national cost in terms of lives lost, families destroyed and a deeply poisoned, dysfunctional system mired in a culture war is nearly incalculable.

Roe is why Ruth Bader Ginsburg, the fierce protector of legalized abortion in all forms (including later-term, sex-selective and disability-targeted abortions) was a hero to the left; and, Roe is why Amy Coney Barrett is the left’s latest villain.

More specifically, Barrett represents a new kind of feminism; one that doesn’t come at the expense of children; that doesn’t require rejecting the inherent goodness of a women’s procreative nature. Barrett’s career has been built on her judicial genius, while fully embracing who she is as a woman, a wife and a mom.

Politics — Not Precedent or Principle

By joining five other pro-life votes on the Supreme Court, four of which seem reliable, a Justice Amy Coney Barrett may indeed spell the end of Roe v. Wade. However, it is likely that even if her confirmation means the end of Roe, it would not be the end of legalized abortion in America.

Rather, it would be the end of federally imposed abortion on all states. In states such as California, New York, Colorado, Virginia and the many others that either have or are trying to enshrine abortion as an unalienable right, the deadly practice would almost certainly continue. Pro-lifers, then, would continue their very important work: persuading hearts and minds, loving scared young women and their partners, adopting precious children, etc.

At the same time, as Kim Colby suggested on the BreakPoint Podcast, overturning Roe would be huge. It could put an end to the kind of brutal, divisive and cruel confirmation hearings we have all become used to.

What Amy Coney Barrett is about to endure at the hands of Senate Democrats is living proof of that.