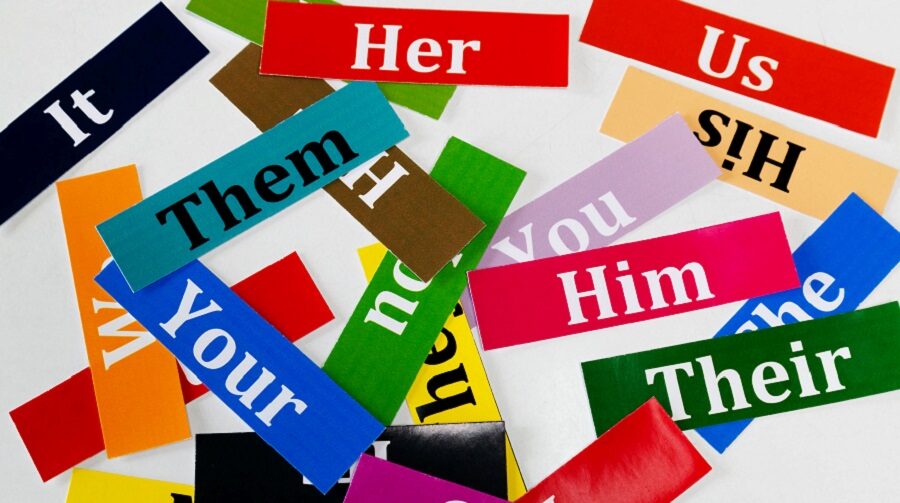 Pronouns matter. I realize they seem like inconsequential little things — him, her, he, she. No big deal. Why don’t we just play along with “preferred pronouns” so everyone can get along? No hassle.

If pronouns really were “inconsequential little things,” then why has so much ink been spilt — and, in some cases, livelihoods lost — for not getting them right? Because getting particular pronouns right means getting a particular narrative right.

The Error That Started All Errors

Here is what is at stake with those simple little words. We are being besieged by a worldview that is completely foreign to Jesus’ view of reality. According to this view, reality is not “out there” in God’s world, but “in here” in the internal world of feelings and personal beliefs.

This outside/inside distinction is central to relativism — the primal heresy, mankind’s first sin in the Garden. It’s the error that started all other errors, and it reigns in the hearts of men who continue to “suppress the truth in unrighteousness” (Romans 1:18). It’s a rebellion against God’s obvious truth and simple common sense.

Obvious truth: Sex is binary. God made it clear in the beginning. “Male and female He created them” (Genesis 1:27). Common sense: God made two sexes — genders, if you will (they’re synonyms) — for a reason. It’s how humans can “be fruitful and multiply.”

Now, though, we are pressured to reject God’s truth and common sense and to affirm a false narrative of reality. Why? Because (they say) it’s the only way to be nice. One mom told us her homeschool charter required all employees to include their “preferred pronouns” in all their correspondence. The guideline stated:

Choosing to ignore the pronouns someone has stated that they go by could imply the oppressive notion that intersex, transgender, non-binary and gender nonconforming people do not or should not exist.

This claim is ridiculous in the extreme. Nevertheless, there it is. On the pretext of being nice, the world has made pronouns the skirmish line in a broader battle of worldviews: Who defines reality, God or each one of us? This demand is not about being nice; it’s about enforcing a foreign worldview.

Paul warned, “See to it that no one takes you captive through philosophy and empty deception, according to the tradition of men … rather than according to Christ” (Colossians 2:8). The deceptions he cautioned against were “empty” — hollow, vacuous, void of truth. This pronoun ploy is based on one of those empty deceptions.

So, what do we do? How do we resist the lie, live the truth and still be nice? We take a cue from Christ and distinguish the movement from the individual.

First, I think we should call people by the names they choose for themselves. Names are different from pronouns since names are personal preferences by nature. Pronouns, though, refer to sex — a fixed feature of reality, not a preference. (With your own children, though, you may insist on a name consistent with their biology.)

Second, if you’re required to post your preferred pronoun, do not simply report your accurate gender. That reinforces the lie that pronouns reflect mere personal preference. Instead, post this: “I don’t have a preferred pronoun. I have a sex. I’m male [for example].”

In most cases, pronouns are third person references used to indicate people not present, so their feelings are not at stake. Arm-twisting at this point is political, not ethical.

This characterization is completely self-reflective. It says nothing about anyone but you. In principle, at least, it should not be a problem. You were asked for a self-assessment. You gave it. End of issue. Refuse to participate in the lie.

Third, if you’re asked to use preferred pronouns when speaking of others, then graciously, but firmly, refuse. Tell them this is not your view, so it would be dishonest and inauthentic to act like it was. Just say no. Hold your ground.

In most cases, pronouns are third person references used to indicate people not present, so their feelings are not at stake. Arm-twisting at this point is political, not ethical. You could use students’ last names for third-person reference if you like, but don’t yield to pressure to adopt pronoun use that reflects a peculiar, controversial, and divisive political view that you do not hold. That’s lying.

Our goal here is modest. We do not demand others abandon their views. We only ask that we be allowed to keep our views. In the long run, we may not be able to change culture, but we can always keep culture from changing us.