Evolutionary biologist Jerry Coyne thinks that only fools would pray about coronavirus. He is wrong and here is why. 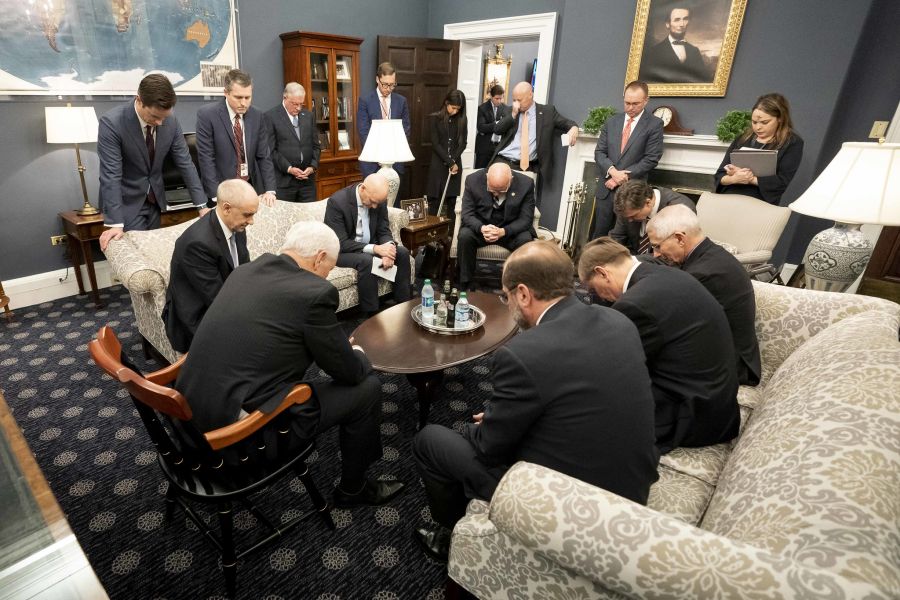 Evolutionary biologist Jerry Coyne ’s undies are in a knot because the coronavirus task force, led by U.S. Vice President Mike Pence, prays together. Oh my.

There’s even a picture of the virus task force praying together! We don’t need prayer; we need science! Here’s the photo, which distresses me but doesn’t surprise me… [a]fter all, one godly intervention is just as delusional as another! (Jerry Coyne, “JESUS ‘N’ MO ‘N’ PENCE” at Why Evolution is True)

Of course, there’s nothing wrong with praying in a crisis. Neanderthals no doubt proffered a few entreaties to their Zeus when a sabre-tooth tiger hunt went south. It’s pretty much part of the human toolkit. The wisdom and efficacy of prayer in a crisis depends wholly on one question: is the prayer directed to Someone who is real, or is prayer based on a delusion?

If the Object of supplication is real, then prayer is probably the first thing you want to do in a crisis. A plea to the Boss is a fine preamble to the grunt work of managing a crisis. I’m a neurosurgeon, and I pray before each operation. It really helps.

If there is no real Object of supplication, then prayer is based on a delusion. But it’s interesting to note that, as historian Rodney Stark has pointed out, prayer and Christian faith during ancient epidemics saved lives because faithful Christians stuck around during epidemics. They provided care to afflicted neighbors who would not have survived except that they had kindly courageous friends to nurse them. St. Jude’s Children’s Hospital — the world’s leading cancer center for children, was founded because of a prayer. So the focus and compassion evoked by prayer saves lives, whether or not God is there to hear the prayer.

Of course, if God does not exist, Coyne is right to imply that prayer is based on a delusion. But here’s the point: if God does exist, prayer is essential.

An Curious Line of Reasoning

So, I ask Coyne, does God exist? Coyne’s answers to the pivotal question have been puerile. His arguments center on an astonishing line of reasoning:

So Coyne uses science that expunges theism to refute theism. In short, he concludes that atheism is true by using a scientific method that presupposes atheism. Oddly, Coyne finds this logic compelling.

It is noteworthy that Coyne’s efforts to refute the actual arguments for God’s existence consist of his insistence that he really isn’t so stupid and he provides a few links. He obviously doesn’t understand the arguments, nor does he wish to learn them.

If God exists, prayer in crisis is warranted and even essential. The arguments for God’s existence are irrefutable. Aquina’s Five Ways are a handy summary:

Aquinas’ First Way and a Stack of Books

Evidence for the existence of God, as provided by Aquinas, actually consists of the same logical and evidentiary process as science itself, only with much stronger logic and more abundant evidence than any other scientific theory.

The prayer of the coronavirus task force is wise and wholly appropriate, for both theological and scientific reasons.

Michael R. Egnor, MD, is a  Senior fellow at the Center for Natural and Artificial Intelligence. He is also Professor of Neurosurgery and Pediatrics at State University of New York, Stony Brook, has served as the Director of Pediatric Neurosurgery, and award-winning brain surgeon. He was named one of New York’s best doctors by the New York Magazine in 2005. He has lectured extensively throughout the United States and Europe.