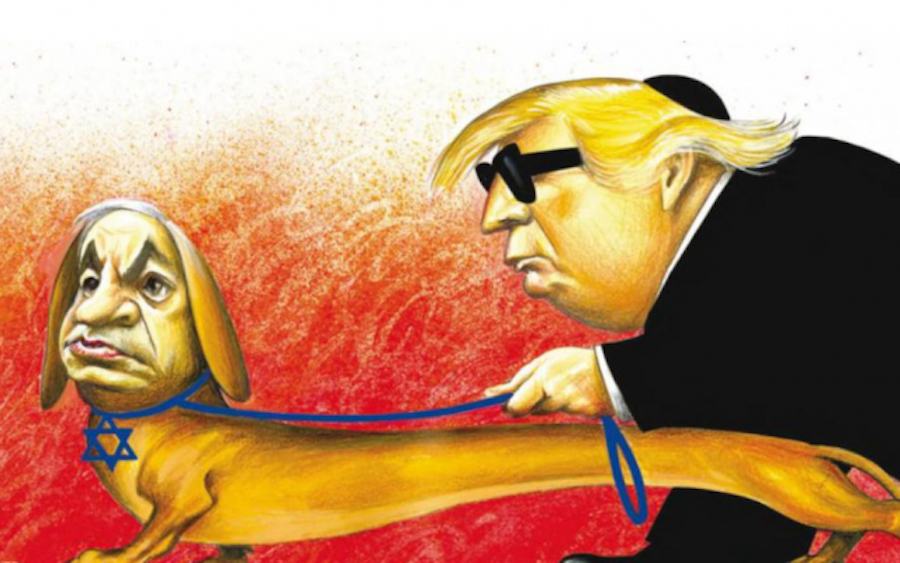 Last week, The New York Times published a cartoon so anti-Semitic that Bret Stephens wrote in his Times column that it was “an image that, in another age, might have been published in the pages of Der Sturmer.” Der Sturmer was the Nazis’ major anti-Semitic newspaper.

A Times columnist charging the Times with publishing a Nazi-like cartoon is quite a moment in American publishing history.

For those who haven’t seen the cartoon, here is Stephens’ description:

“The Jew in the form of a dog. The small but wily Jew leading the dumb and trusting American. The hated Trump being Judaized with a skullcap. The nominal servant acting as the true master. The cartoon checked so many anti-Semitic boxes that the only thing missing was a dollar sign.”

The dog leading Trump had the face of Benjamin Netanyahu and was wearing a Star of David necklace. Trump was wearing a back yarmulke.

For those naifs and Israel-haters who dismiss such depictions as merely “anti-Zionist” or “anti-Israel” but not anti-Semitic, the yarmulke on Trump’s head should be the giveaway, as should the theme itself — the Jew leading the Gentile astray, one of the oldest anti-Semitic canards.

Of course, the cartoon is not just about Israel or Jews. It is about Trump, whom the left so hates. It depicts him as the stooge of both Vladimir Putin and Netanyahu. There is no truth to either depiction, but if truth mattered to the left, there would be no left. Truth is a liberal value, and it is a conservative value, but it is not a leftist value. Truth to the left is pravda. Pravda, the Russian word for “truth,” was also the name of the Soviet Communist Party newspaper.

So, the question is: Why would The New York Times, published in the city where more Jews live than any other city in the world outside of Israel, whose publisher is a Jew and whose editors are disproportionately Jewish, publish a Nazi-like anti-Semitic cartoon?

For some Times readers — or, as often, former readers — the answer is clear: The Times has a longstanding Jewish problem, dating back to World War II, when it mostly buried news about the Holocaust, and continuing into the present day in the form of intensely adversarial coverage of Israel. The criticism goes double when it comes to the editorial pages, whose overall approach toward the Jewish state tends to range, with some notable exceptions, from tut-tutting disappointment to thunderous condemnation.

For these readers, the cartoon would have come like the slip of the tongue that reveals the deeper institutional prejudice. What was long suspected is, at last, revealed.

How have even the most blatant expressions of anti-Semitism become almost undetectable to editors who think it’s part of their job to stand up to bigotry?

The reason is the almost torrential criticism of Israel and the mainstreaming of anti-Zionism, including by this paper, which has become so common that people have been desensitized to its inherent bigotry. So long as anti-Semitic arguments or images are framed, however speciously, as commentary about Israel, there will be a tendency to view them as a form of political opinion, not ethnic prejudice. But as I noted in a Sunday Review essay in February, anti-Zionism is all but indistinguishable from anti-Semitism in practice and often in intent, however much progressives try to deny this.

There is No Difference With Hate

Exactly right. As I wrote in Why the Jews? The Reason for Anti-Semitism 40 years before Stephens wrote his column, there is no difference between anti-Zionism and anti-Semitism. Of course, one can criticize Israel, just as one can criticize any country, but that is not anti-Zionism. Anti-Zionism is not criticism of Israel. It is a hatred of Israel — a hatred greater than that of any other country and a delegitimization of Zionism, the movement to reestablish the Jewish national home.

Imagine someone who argued that the establishment of the Italian state — Italy — was illegitimate and who hated Italy more than any other country in the world yet claimed that he was in no way anti-Italian, as he had Italian friends and loved Italian culture. No one would believe such an absurdity.

The answer is most American Jews, while ethnically Jewish, are ethically leftist. And ethics trump ethnicity — as they should. For most American Jews, therefore, the Times is far more consonant with their ethical values than are Jewish values (if, by Jewish values, we are talking about the Torah and traditional Jewish religious/moral teachings). So, then, when you combine hatred of the right-wing prime minister of Israel and reverence for the left-wing Times, even a Nazi-like cartoon — if it negatively depicts Benjamin Netanyahu and Donald Trump and is published in The New York Times — is no big deal.