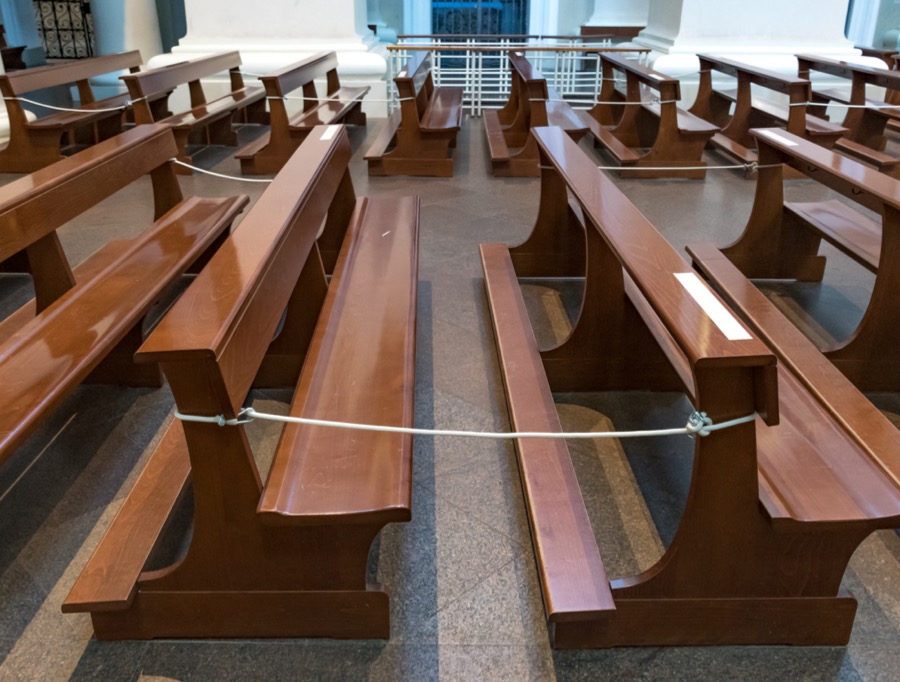 All pastors relate to COVID differently depending on their perspective and circumstances. They are under tremendous pressure and need more grace. I’m sure that Andy has done much good in his community, and for that, I applaud him. However, I don’t think that his comments can go unchecked: “Iron sharpens iron” (Proverbs 27:17).

In a recent interview, Andy Stanley, pastor of Atlanta’s North Point Community Church, said he is “‘embarrassed’ by churches that engaged in ‘spitting matches’ with state and local governments over COVID-19 lockdown restrictions, lamenting that far too many churches ‘abandoned the mission for the sake of the model.’”

No, we haven’t abandoned the mission, because the mission is to be salt and light, to bring truth to a lost and perishing world, and to stand boldly for the Word of God. We need to abandon fear and stop believing falsehoods leveled by those with an agenda to silence the pulpits and stop the spread of the gospel.

What makes me think it is an agenda? I don’t have time to go into all the inconsistencies, but let me present just a handful: Why did numbers drop substantially after the inauguration on January 20th and the language about the virus change? Why are cases of the flu and pneumonia nearly extinct?

Why are Walmart and Costco packed every day of the year, while small businesses are being strangled? Why can people gather to protest the police, but more than 10 at a Thanksgiving dinner is a “super-spreader”?

What about masks? One day they tell us not to wear masks. The next day you’re killing old people if you don’t wear a mask. Then one mask isn’t enough, you should wear two masks. Then even if you’ve had the vaccine shot or had COVID-19, you should still wear a mask.

Why are law-abiding citizens being harassed and arrested, while those breaking the law, destroying property, and attacking innocent people are declared to be part of a “summer of love”?

This is why so many Americans are beyond angry, and I believe it may be a righteous anger. We have been subjected to skewed numbers, fake pictures, and elevated statistics with the undeniable goal of instilling fear. And what about all the COVID-positive illegal immigrants crossing the border? The same administration that is keeping your kids from going to school because of COVID-19 is releasing COVID-19 positive illegal immigrants into the American population.

Yes, COVID is real, but it’s also being used to push an agenda. There are numerous stories of doctors being told to write COVID as the cause of death even if it was not. The San Diego Tribune ran a story in 2020 quoting county supervisor Jim Desmond as saying, “We’ve unfortunately had six pure, solely coronavirus deaths — six out of 3.3 million people.”

I’m not minimizing even one death, but there is mounting evidence that the lockdowns themselves have caused as many, or even more, deaths that the virus itself. These are not my words — these are the words of the World Health Organization’s special envoy on COVID-19: “In the United States alone, lockdowns have been tied to increased thoughts of suicide from children, a surge in drug overdoses, an uptick in domestic violence, and a study conducted in May concluded that stress and anxiety from lockdowns could destroy seven times the years of life that lockdowns potentially save.”

Over the past year we have learned a lot about this virus — and nearly as much about those who would seek to use tragedy to further a political or social agenda. As the church, it is our responsibility to stand against the deceptions rather than surrender to it.

Removing the Veil of Deception

Andy Stanley continues, “The thing that has been concerning to me about the local church is how quickly so many local churches felt like, ‘We’ve got to get back in our building, shoulder to shoulder, doing what we’ve always done.’”

So “quickly,” Pastor Stanley? We are now a year into this. Irrational reactions, inconsistent policies, and a severe overreach of authority are crippling the church and devastating our nation. We must remove the veil of deception. Sadly, the new deception is that if you stand for freedom, then you are selfish.

Pastor Stanley’s words, even if it was not his intention, degrade the brave men and women of faith who have determined that God’s Word requires us to get back to being “shoulder to shoulder, doing what we have always done.” It’s called the gathering of the saints — and we are not to forsake it. A pastor, of all people, should recognize this.

Since the 1600s, America has experienced health-related epidemics such as typhoid, scarlet fever, and yellow fever every 15 years or so, but we have never taken such extreme measures as we did for COVID-19. We are to love our neighbor but also contend for what is right. What about all the families who are deteriorating because of abuse and addiction? What about the escalating suicide rate? What about loving those neighbors? Pot shops, liquor stores, and abortion clinics are open, so why are churches still closed? Why is there no outcry about that?

God established the legal system to protect the innocent. Paul appealed to Caesar for this very reason (Acts 25:11). It’s not only permissible for churches to challenge the lockdowns; it’s a necessity. Had bold pastors capitulated in 2020, the church may never have opened in many areas.

Thank God for men like John MacArthur, Jack Hibbs, and Rob McCoy, who by their courage in opening their churches motivated us to open ours on May 31, 2020. With a congregation size considered to be that of a large church, we had zero COVID deaths, and very few people became sick. I’m certainly not minimizing the virus, and I would not want people to get sick. We take precautions as warranted, but this is all no longer about science but, rather, a way to stir up fear.

As I wrote in my article, An Open Letter to Silent Pastors – Fight or Fade Away, “over the last few decades, Americans have seen the destruction of the institution of marriage between a man and a woman, the removal of God’s Word in several areas, and the blatant murdering of millions of babies.”

“This is an indictment against America and the pulpit is partially responsible — our silence speaks volumes. The pulpit regulates the spiritual condition of God’s people, which affects the nation. … Sadly, many pastors are exchanging truth for passivity, boldness for cowardliness, and conviction for comfort.” They aim “to be motivational speakers rather than preachers of righteousness.”

In my opinion, most pastors who are not opening their churches are upset at the ones who are simply because they are convicted. Instead of repenting for cowardliness and a lack of boldness, they open friendly fire.

Pastors, we are not just cheerleaders, we are game changers. We need men filled with the Spirit of God, not passivity and political correctness. Granted, there are many wonderful pastors and churches — and I appreciate their ministry — but too many American churches have drifted off course. They have lost the compass of truth and the boldness of the Spirit.

For More: Watch this very short clip about boldness here. And read my article titled, An Open Letter to Our Leaders—Churches Must Not Be Handcuffed, here.