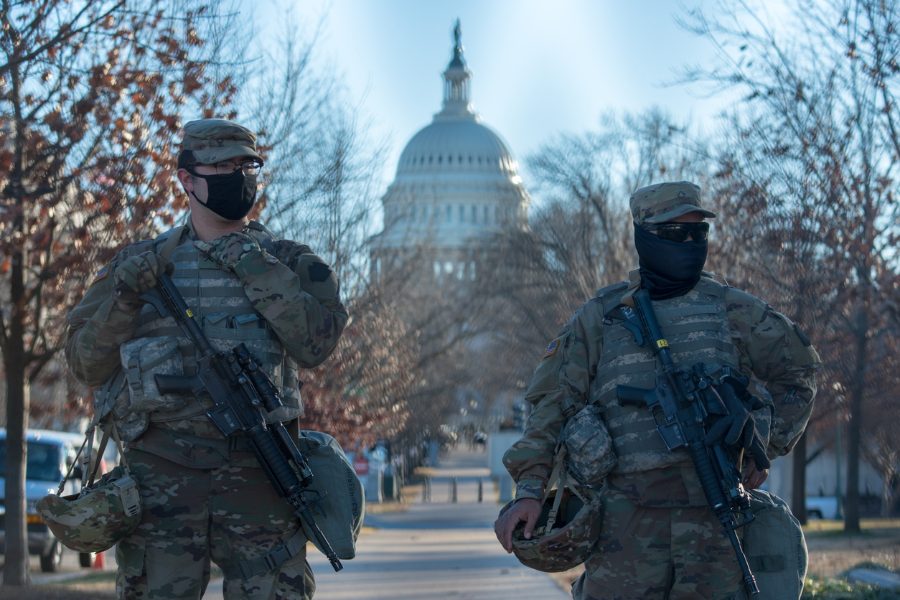 Freshman Rep. Lauren Boebert of Colorado referred to the Capitol complex, surrounded by 7-foot fencing topped with razor wire and populated with almost 5,000 National Guard troops, as “Fort Pelosi” in her CPAC speech on Saturday.

“I wouldn’t be surprised if we started quartering soldiers in the committee hearing rooms,” she quipped.

“There’s plenty [of National Guard] in the parking garages of ‘Fort Pelosi,’” she said. “Maybe we can start unreasonably searching and seizing members of Congress. Oh, wait, we’re already doing that in the House chambers.” That was a reference to newly-installed metal detectors and the guards now posted at each entrance to the House chamber. It’s been almost two months since the assault, and the Speaker is just getting started in her attempts to milk it.

He described Pelosi’s order as an effort to use them as her “private security force” and said she’d delivered them an “open-ended mandate.”

“I’ve repeatedly asked,” he said, “and so have a number of my colleagues, the Army, the National Guard Bureau, the Department of Justice, what is the threat that is so large, specifically, that requires more soldiers on Capitol Hill than we have in Iraq and Afghanistan combined? And then what are we going to do about it? What are we going to do going forward?”

What is the Threat?

Democrats claim the security measures remain due to ongoing threats, but is there any evidence of such threats? No, said Rep. Dunes, ranking member of the House Intelligence Committee, in an interview with Maria Bartiromo on Sunday Morning Futures. “This is nothing compared to the threats that we’ve seen for the last two decades since 9/11, 2001, of radical Islamic, potential, attacks on the Capitol and the targeting of politicians in other government buildings.”

He went on: “…What this is really about, this is a Hollywood production scene. So, nobody’s in Washington D.C., you can’t find anybody, nobody’s on the streets, the restaurants are mostly closed. And, what they did is, they put up fencing that should have been there in the first place.” [NOTE: We know he meant some type of appropriate fencing, not of the razor-wire variety.]

“So, one of the basic rights that we’ve had in this country, for over 200 years,” he said, “has been the freedom to assemble. And I’ve been through many protests while I’ve been in Washington…it happens all the time…”

“…This is all about narrative-building…they want to label every conservative and Republican across this country as some type of dangerous domestic terrorist threat.” Nunes added that he didn’t think it would work and would come off as the ridiculous stunt it is.

“It looks worse than a third-world country,” he said. “I’ve been to third-world countries during my time in Congress…and to see this fencing, this razor wire, is completely absurd when we’ve had over the past real serious threats that continue to this day in terms of FOREIGN intelligence, looking at radical Islamic problems that we still face.”

Nunes said there was no “intelligence failure” and that the security issue isn’t hard. There have been many mass protests at the Capitol, and every time — till this one — they’ve had proper fencing in place. This time they had a flimsy 3’ portable fence. Nunes said it’s “preposterous,” a “joke,” that we have to have this massive security overkill.

“Pelosi is the ‘mayor’ of the Capitol,” he said, responsible for the lack of security when it was needed. But she’s deflecting that responsibility by having her “commission” look into it. As enlightening as it might be to have a commission look into why Nancy refused Trump’s approval of more security, including the National Guard, that’s not what this commission is going to examine. Its purpose is to further the anti-Trump narrative.

How do we know? I’ve said the tip-off was her choice of retired Lt. Gen. Russel Honoré, a viciously anti-Trump partisan, to head Pelosi’s security review. He’s already planning to ask Congress for MORE security around the Capitol: 1,000 more police officers and even more barriers, to the tune of $100 million. Your tax dollars at work.

What is QAnon Anyway?

Nothing like a little pressure! I quote this letter not because I have all the answers, but because it illustrates how far most conservatives are from believing these wild conspiracy theories. They want to know the truth. The most consequential and widespread conspiracy story of all, that Trump was an agent of Russia who won in 2016 with Putin’s help, was a fiction created by the Left and circulated by the media with absolutely no real evidence, just deliberate fakes. And now, the Left has replaced one insane hoax with another; namely, that Trump supporters are domestic terrorists, largely members of this QAnon group, and bent on a violent overthrow of America. Heck, most of us wouldn’t even know about QAnon if the Left weren’t always talking it up.

My staff and I will find out as much as we can about QAnon and what they apparently believe about this alleged international circle of satanic, cannibalistic (not kidding) anti-Trump child abusers. We have no evidence of any of it. We understand this shadowy figure “Q” has not been identified and might not exist. But, to tell you the truth, this just hasn’t been part of our world.

One thing we do know, however: there is no evidence of any uprising being planned for March 4 (formerly the date for presidential inaugurations). It’s just a pretext for turning D.C. into an armed camp and blaming that on Trump. And when the uprising doesn’t happen, what then? Pelosi and Lt. Gen. Honoré get to pat each other on the back for “stopping” it.