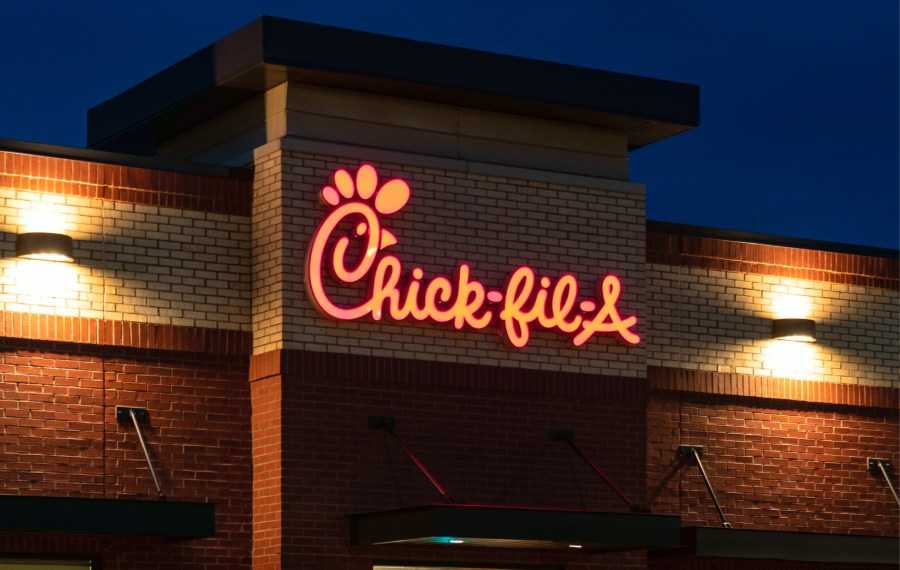 By Jonathan Miltimore Published on February 14, 2021 •

When Will Haynie had a traffic problem, he knew just who to call.

It started with a computer glitch on a busy Friday at the COVID-19 vaccination center at Seacoast Church. Health officials told the Mount Pleasant, South Carolina, mayor that traffic was a mess and wait-times for the vaccine had reached more than an hour.

So Haynie called in the cavalry: Chick-fil-A Manager Jerry Walkowiak.

“When you need help, call the pros,” Haynie said. “I called him [Walkowiak] on my way over and he actually got there before I did.”

Standing beneath an umbrella in a cold rain, Walkowiak quickly began directing drivers using the Chick-fil-A blueprint, approaching drivers in line, ensuring they had their paperwork ready to go, and then directing them to a spot where they could wait to receive their vaccine.

“All those issues got fixed as things progressed,” Haynie later tweeted. “[Chick-fil-A] to the rescue!”

Chic Fil A manager Jerry Walkowiak donating his professional drive thru experience to help our vaccination program in Mt Pleasant today. When you need help, call the pros. pic.twitter.com/63RvcVR8KJ

Despite Vaccines, Thousands of Americans Are Dying Each Day

The COVID-19 vaccine has arrived, but the pandemic is far from over. More than 4,000 Americans are dying with the virus each day, according to official statistics.

Part of the problem stems from the clumsy rollout of vaccines by public officials. Distribution has been slow and marred by mass dumping of vaccines — inoculations that could be saving lives — because of bureaucratic dysfunction and rigid guidelines.

While there are no reports of vaccine dumping in South Carolina, some public officials have expressed frustration with delays in the rollout. News reports say that as of Sunday, South Carolina had received 542,750 total vaccines, 277,258 of which had been administered.

To be sure, delivering and administering hundreds of thousands of vaccines takes time. But that’s all the more reason why unnecessary delays — like the one briefly experienced at Seacoast Church on Friday — should be avoided at all costs.

Chick-fil-A is the third largest fast food chain in the U.S., bringing in $11.3 billion in sales in 2019 at more than 2,600 locations. One of the reasons for its meteoric rise is its legendary drive-thru efficiency.

Chick-fil-A is known for insanely long lines, especially during peak hours. According to Buzzfeed News, on average, a Chick-fil-A drive-thru serves 95 cars between noon and 1 p.m. alone, far more than its competitors, and more than 60 percent of the chain’s revenues come via the drive-thru window.

So many people marvel at Chick-fil-A’s drive-thru mastery that it came as a shock to many to learn the chain’s drive-thru times are actually longer than its competitors. This revelation, which was reported by news outlets with little context, didn’t sit well with Chick-fil-A fans.

But as QSR magazine (who conducted the survey) points out, there’s more to the story than long wait times.

For context, McDonald’s claimed the second-busiest drive thru, and only 41.8 percent of its drive thrus had three or more cars and 9.1 percent had six or more.

Essentially, drive-thru times are a bit longer because of the enormous volume Chick-fil-A serves at the drive-thru.

The reality is people hate waiting in lines, and Chick-fil-A fans are no exception. But Chick-fil-A has managed to make waits relatively short — 322 seconds, on average, about a minute longer than the fast food average — despite its insanely long lines.

Chick-fil-A is only able to pull this off because of the efficiency Walkowiak showed at the vaccine center. And that efficiency is no accident.

Chick-fil-A has no fewer than three “Innovation Centers” where the chain tests restaurant layouts to maximize efficiency for various operations. Buzzfeed reporter Venessa Wong describes how on one January afternoon, at the Atlanta-based chain’s newest innovation center, workers tested a new drive-thru design at a mock restaurant.

“The main question at hand: How narrow could the drive-thru lanes get to save space?” Wong writes. “There is also the lingering but essential question of how to move cars through more quickly, to shorten those epic lines.”

The solution, or one of them, was to have teams of servers (up to six people) walking among cars drive-thru lanes taking orders and running payments via tablet. This allows Chick-fil-A to get customers in and out quickly despite lines that at times look, frankly, daunting.

Long line at the Chick-Fil-A Drive-thru on Winchester. pic.twitter.com/WZln0dDf

But the effort to serve customers and make their experience enjoyable and swift has paid off.

Customers love Chick-fil-A and its stellar service, and the chain continues to see impressive growth in revenue and franchises.

The Incentives of Markets

Compare the miraculous efficiency of Chick-fil-A to, say, your local DMV.

On my last visit, I waited in line 10 minutes before I was able to talk to someone. When I got to the window, I was given a number and told to take a seat. “It might be a while.”

Forty-five minutes later, a woman tested my eyes, snapped my picture, and asked me to sign some paperwork. The entire process took two minutes, but I was there for an hour. And the truth was, I was relieved! It could have taken longer, or I could have dealt with an unpleasant person.

The woman who took my picture was not exactly warm, but at least she wasn’t rude or curt. And in my experience, this often is not the case when dealing with bureaucrats and bureaucracy. In fact, it’s something we almost expect.

For Chick-fil-A, however, there is a clear incentive. Chick-fil-A wants customers to be happy because they want their business, which means serving them the very best they can.

There’s a reason the unhelpful or snippy bureaucrat has been depicted ad infinitum in both film and literature. The theme of the nightmares of bureaucracy has been explored by numerous thinkers — most notably, perhaps, by the great Franz Kafka — but my personal favorite depiction comes in the 2015 Wachowskis film Jupiter Ascending, starring Mila Kunis, Sean Bean and Channing Tatum.

While the space opera was a bit of a disappointment overall, the scene depicting the horror of dealing with an interplanetary bureaucracy (see below) is nothing short of hilarious. And part of the reason it’s so funny is because it’s something nearly all of us have experienced at one time or another.

Think about it for a moment. Why is your service at Chick-fil-A, Home Depot, or the local Toyota dealer so different from your visit to the DMV or the Post Office? It’s not because nice people go into customer service and ornery or unhelpful people go into bureaucracy.

The answer comes down to a single word: incentives. The absence of market forces means there is really no compelling incentive for the DMV to improve efficiency (or smile when you come through the door). As I pointed out earlier, we’ve pretty much come to expect bureaucracies to be slow and cold.

For Chick-fil-A, however, there is a clear incentive. Chick-fil-A wants customers to be happy because they want their business, which means serving them the very best they can. Indeed, the word customer service tells us something about the relationship between buyer and seller. The seller exists to serve customers.

With government “services,” on the other hand, we the “customers” are the ones who often must grovel like subjects to win the good graces of a bureaucrat if we want to make our flight, renew our driver’s license, or (in some systems) get the medical care we need.

Now, we’ve all had less than satisfactory experiences with businesses as well as bureaucracy, but the inherent dynamics of the systems themselves are unmistakable. Businesses want people to be happy and are incentivized to make them so. No such incentive exists in bureaucracy, which is why we walk on eggshells when going through TSA security checkpoints or walk up to the counter at the DMV.

The “customer” in these situations has very little power. We know it and, more importantly, they know it. This is why the economist Ludwig von Mises found descriptive terms for modem captains of industry — “chocolate king” or a “cotton king” or “automobile king” — as inherently misleading.

“Their use of such terminology implies that they see practically no difference between the modern heads of industry and those feudal kings, dukes or lords of earlier days,” Mises wrote. “But the difference is in fact very great, for a chocolate king does not rule at all, he serves.”

Mises correctly observed that these “kings” do not in fact reign over conquered territory. They exist to serve us.

The chocolate king — or the steel king or the automobile king or any other king of modern industry — depends on the industry he operates and on the customers he serves,” Mises continued. “This ‘king’ must stay in the good graces of his subjects, the consumers; he loses his ‘kingdom’ as soon as he is no longer in a position to give his customers better service and provide it at lower cost than others with whom he must compete.

With government “services,” on the other hand, we the “customers” are the ones who often must grovel like subjects to win the good graces of a bureaucrat if we want to make our flight, renew our driver’s license, or (in some systems) get the medical care we need.

It’s this dynamic that explains why our experiences at Chick-fil-A are so much better than those trips to the DMV. And the incentives baked into markets — to make customer experience enjoyable and satisfactory — also explains why operations like Chick-fil-A can operate with an efficiency bureaucracies will never be able to match.

Some might be tempted to believe we could improve, say, vaccine distribution if only bureaucracies had more resources, if they partnered with private industry, or if they were led by people like Jerry Walkowiak.

But that’s the wrong lesson.

The lesson is that vaccine distribution should be removed from the hands of bureaucrats altogether, and placed in the metaphorical hands of markets. Only then will we see these life-saving doses quickly and efficiently administered.

Never Trumpers, the Elites, and the Ordinary Americans They Disdain