Who Authorized the Department of Homeland Security to Police Online Speech? Not Congress

Newly published documents obtained by the Intercept show the U.S. government is actively shaping online discourse and policing speech. This invites a question: who gave them this authority? 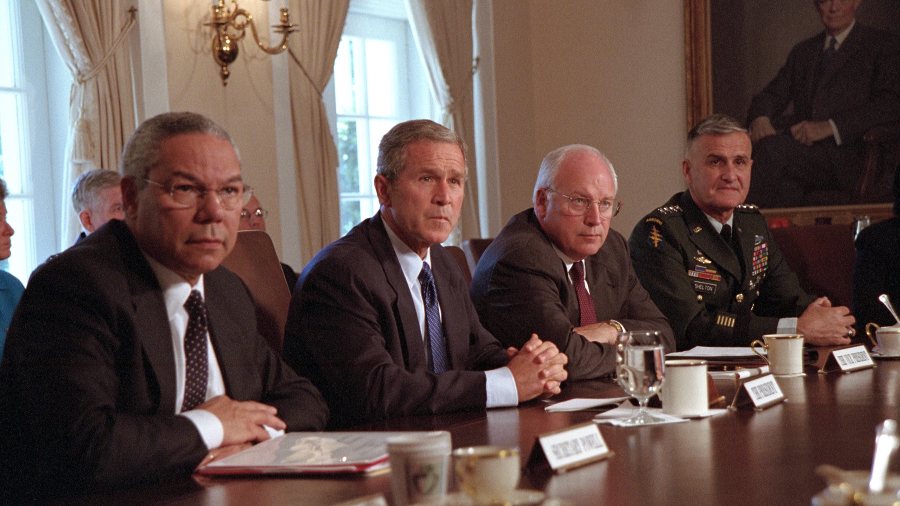 When George W. Bush signed the Homeland Security Act in 2002, the goal was to improve national security by strengthening government at various levels and helping them identify and respond to threats, particularly terrorism.

“The continuing threat of terrorism, the threat of mass murder on our own soil, will be met with a unified, effective response,” said Bush. “Dozens of agencies charged with homeland security will now be located within one cabinet department with the mandate and legal authority to protect our people.”

The law contained “severe privacy and civil liberties problems,” the ACLU argued, but the legislation enjoyed broad bipartisan support. Only nine Senators voted against it (eight Democrats and one Independent).

Bush tapped Tom Ridge as the first secretary of the Department of Homeland Security, but public policy experts admitted it was unclear precisely what the new department would do.

“The first challenge is to lower expectations,” Paul C. Light of the Brookings Institution told The New York Times. “People should think they will be safer, but remember we have a long way to go.”

‘Platforms Got to Get Comfortable With Gov’t’

One thing not mentioned in the Homeland Security Act is free speech. The word “speech” does not appear on even one of the law’s 187 pages.

Nevertheless, newly-published documents published by The Intercept show the extent to which the DHS is now actively involved in using the power of the U.S. government to shape online discourse and police speech by pressuring private platforms behind closed doors.

“In a March meeting, Laura Dehmlow, an FBI official, warned that the threat of subversive information on social media could undermine support for the U.S. government,” The Intercept wrote of one message. “Dehmlow, according to notes of the discussion attended by senior executives from Twitter and JP Morgan Chase, stressed that ‘we need a media infrastructure that is held accountable.’”

According to a copy of the DHS’s capstone report outlining top priorities in the coming years, the department intends to hold media accountable by targeting “inaccurate information” on a range of controversial topics such as “the origins of the COVID-19 pandemic and the efficacy of COVID-19 vaccines, racial justice, U.S. withdrawal from Afghanistan, and the nature of U.S. support to Ukraine.”

That DHS was seeking to police speech and shape online discourse was not in itself a revelation. In April 2022, the Biden administration announced the creation of a Disinformation Governance Board, but the initiative was paused after just three weeks over widespread public outcry after the board was dubbed “the Ministry of Truth” by critics.

What The Intercept’s story reveals is the overt pressure the government was exerting on private companies to censor speech. For example, The Intercept described a “formalized process” government officials used to flag content on platforms such as Instagram and Facebook to throttle or remove problematic content.

The story also shows how the revolving door between government and the corporate world created enthusiasm for DHS initiatives.

“Platforms have got to get comfortable with gov’t. It’s really interesting how hesitant they remain,” Microsoft executive Matt Masterson, a former DHS official said to DHS official Jen Easterly in a February text message, according to The Intercept.

In November 2018, following a series of high-profile cyber attacks, Trump signed into law legislation known as the CISA Act, which created the Cybersecurity and Infrastructure Security Agency (CISA), a standalone federal agency dedicated to fighting cyberterrorism.

Like the Homeland Security Act of 2002, the word “speech” doesn’t appear anywhere in the legislation. Nor do the words “misinformation” or “disinformation.” However, one line in the sprawling law (Section 318) contains these four words: “Social media working group.” It is presumably this line that led CISA to boast of its “evolved mission” to, in the words of The Intercept, “monitor social media discussions while ‘routing disinformation concerns’ to private sector platforms.”

In 2018, to respond to election disinformation, DHS created the Countering Foreign Influence Task Force and began flagging voting-related “disinformation” that appeared on social media platforms — even though the words “election” and “vote” appear nowhere in the CISA Act. By the following year, DHS was employing 15 full- and part-time staff tasked with “disinformation analysis,” and in 2020 the department’s disinformation focus had expanded to include Covid-19.

A law that had been passed to protect critical infrastructure in the U.S. from cyber attacks was now being used to censor Americans on social media.

The mission creep of DHS is breathtaking. Nowhere in the Homeland Security Act or the CISA Act is the department authorized to police speech, yet since 2018 it has led the broadest and most dangerous assault on free expression in modern American history.

The newly published documents vindicate those who’ve argued the true threat to speech and online discourse is not “misinformation” — as many progressives contend — or woke tech companies — as many on the right have argued — but the government itself.

The reality is, the government is not uniquely benevolent, knowledgeable, or honest. In fact, governments are arguably the most dishonest organizations in history, and the U.S. government is no exception, as some have noted.

“Our government produces lies and disinformation at industrial scale and always has,” journalist Jack Shafer wrote in Politico after the White House unveiled its disinformation board in April. “It overclassifies vital information to block its own citizens from becoming any the wiser. It pays thousands of press aides to play hide the salami with facts.”

To find evidence that government is not in the truth business, one need look no further than the DHS, who for the better part of a year targeted online “disinformation” that explored the possibility that the virus may have originated from a leak at the Wuhan Institute of Virology.

While the origins of Covid-19 remain uncertain, government officials, media, and social media administrators treated the lab leak theory as a crackpot conspiracy unfit for discussion. For the better part of a year, people who speculated about the lab leak theory on platforms such as Facebook faced censorship and suspension, because of the DHS’s active role.

That the federal government — which had been funding the Wuhan lab and gain-of-function research — might have motives beyond altruism to suppress this narrative was conveniently ignored, as were pertinent facts. This included a U.S. intelligence assessment in early 2020 that acknowledged the virus may have been released accidentally from an infectious diseases lab, as well as reports that State Department officials had previously acknowledged concerns about safety protocols in Wuhan.

By mid 2021 the White House itself had acknowledged the credibility of the lab leak theory, but only after DHS had waged a prolonged disinformation campaign against it.

‘Guilty of The Evils It Is Supposed to Punish’

“We have to protect both the people and their freedoms,” said Feingold while speaking of his broader opposition to the Bush administration’s War on Terror policies.

It’s now clear that Feingold was right when he said the laws failed to strike “the right balance between law enforcement and civil liberties.” In their effort to make people more safe, federal lawmakers created a bureaucracy that is now trampling the very rights it was created to protect, a fact that would not have surprised the 19th Century economist Frédéric Bastiat, who noted the state’s tendency to grow and become an oppressor of rights.

“Instead of checking crime, the law itself [has become] guilty of the evils it is supposed to punish!” wrote the author of The Law.

The American Founders, in their quest to create a limited government to prevent this evil, created the First Amendment. It plainly states “Congress shall make no law respecting an establishment of religion, or prohibiting the free exercise thereof; or abridging the freedom of speech…”

We now know the DHS has been working quietly for years to abridge free speech, and it has done so with no explicit legal authority; the laws Congress passed speak not a whisper about regulating speech.

The Department of Homeland Security needs to be put in check, and it reminds us of an ancient question: quis custodiet ipsos custodes (who guards the guardians)?